World War II was colossal, encompassing practically every corner of the Earth and every type of warfare, including urban combat, guerilla campaigns, information warfare, air-sea battles and conventional campaigns. War was messy, complicated and ugly then, and it still is. Studying World War II is as relevant to understanding modern conflict as reliving a firefight in Fallujah, pirate hunting in the Gulf of Aden or making a bomb run over Tripoli.

Before the U.S. entered the conflict, the outcome was in grave doubt. Under the leadership of Adolf Hitler, Nazi Germany drew Great Britain and France into war after invading Poland in 1939. In 1940, Hitler had conquered France and driven the British army into the sea. He turned on Russia in 1941. That December, Japan’s devastating attack on Pearl Harbor marked the beginning of a lightning imperial campaign to secure all of Southeast Asia. In 1942, Allied offensives led by the U.S., Britain, Canada and Australia—coupled with a Soviet counteroffensive bolstered in large part by American materiel and equipment acquired via President Franklin D. Roosevelt’s Lend-Lease program—took out the Axis.

This monumental struggle holds many valuable lessons for today. The larger lessons, however, cannot be captured by studying only one person or episode. Nor are they readily conveyed by magisterial, comprehensive histories. Instead, a middle ground of study brings us closer to the raw truth of war. It’s an approach that was championed by Brig. Gen. Thomas E. Griess, founding chairman of West Point’s Department of History. Griess advocated a historical perspective that includes breadth, width and depth conveyed through an authentic, layered narrative that places smaller events in the context of larger ones.

This “West Point way” of thinking about war history dovetailed with how the armed forces conceptualized military activities in the 1980s and 1990s: through the prism of three levels of war. The highest level, strategic, encompassed the overall effort to use military power to win armed conflict. One step down was the operational level, where campaigns are organized by theater to achieve overall war objectives. The lowest level was tactical, the conduct of battles and activities.

Today, both West Point and the boots on the ground shape contemporary thinking on how to explain war—whether it be armored maneuvers on the plains of central Germany or a counterinsurgency campaign in Kandahar.

Vagaries of War and War Histories
I followed the West Point way while writing After D-Day: Operation Cobra and the Normandy Breakout. My book traces the activities that carried U.S. divisions far beyond the beachhead on Normandy. It provides context that walks the story down from its place in the march to Berlin to the muzzle of the lead tank. That only takes you so far in learning from the war, though. The breakout, though emblematic of the war in Western Europe, is not sufficiently representative of the American military experience in World War II.

The cacophony that erupted after the war at the U.S. Army Command and General Staff College at Fort Leavenworth, Kan., proved that point quite well. Before and during the war, the college trained regular Army commanders and staff officers in the practice of combined-arms warfare: the coordinated use of infantry, armor, artillery, air power and more. Officers proposed solutions to tactical problems assigned in class, and instructors graded them according to standardized answers—the “school solution.”

After the war, the Army dispatched to the college majors and lieutenant colonels who had learned the art of war on the job. When presented with the school solution, veterans of the European campaign invariably disagreed, offering an alternative solution based on their own experiences. Meanwhile, veterans of the Pacific campaigns would decry the school solution, insisting that “those European guys don’t know what they are talking about,” and proceeding to describe the tactics used in their theater. Undoubtedly, the same ferocious debates are roaring today between commanders who fought the Taliban in Afghanistan, and those who battled in the cities of the Sunni Triangle in Iraq. 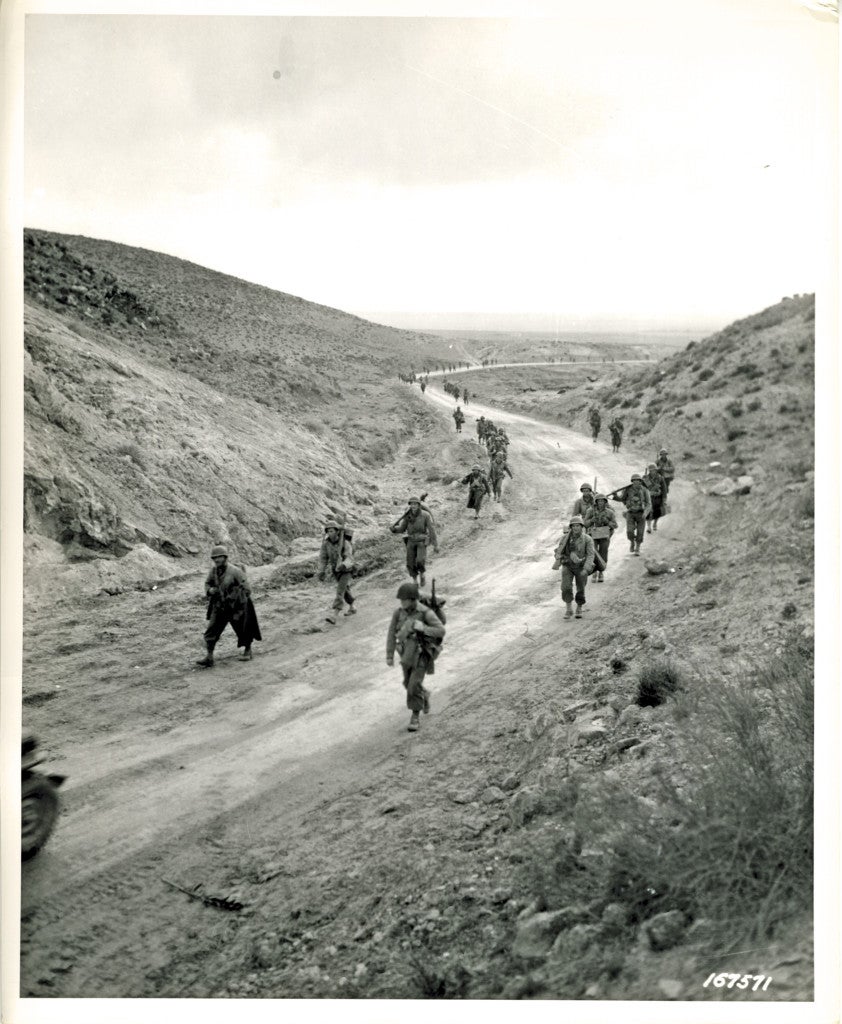 Then, as now, all are right—there’s more than one way of warfare. Battle tactics must accommodate battlefield conditions. In World War II, U.S. forces fought in variations of five combat environments. Operation Cobra was representative of action in what the Allies called the European Theater of Operations, but fighting in the mountainous terrain of Southern Europe (part of the Mediterranean Theater of Operations) was another. The desert campaigns in North Africa had distinctive features all their own. On the other side of the world, land combat in the Pacific was distinguished by “island-hopping” amphibious operations and protracted land campaigns.

More to Tell, Learn
One reason I chose Operation Cobra as a subject of study for the European Theater was that it was among the least examined of the major battles there, even though it was a major turning point in the war. There is much deep study of World War II yet to be done. Despite all the books, films, documentaries, scholarly articles and research devoted to the war, much remains unexamined. This is especially true regarding the war against Japan.

Europe dominates U.S. remembrance of the war because most of the American men and materiel deployed were engaged in Europe. As memories and myths were being shaped afterward, the focus naturally rested where most of America’s fathers, husbands and sons had seen battle.

Yet the battles of the East remain an essential component of the American military experience. It is crucial to understand those battles—and not just because it was a different combat environment. It was the most demanding and brutal kind of war that Americans had ever fought. The battlegrounds of Europe tested the brain and muscle of the American fighter and proved the value of America’s military organization. The Pacific tested the soul, and the worth, of the American individual.

The European warriors were seldom alone. There were masses of troops and civilians, columns of tanks and supply trucks—even mess halls and Doughnut Dollies. Not so in the Pacific. In the jungles, on the rocky atolls, war was often solitary and savagery very, very personal.

Another reason not to abandon World War II to the dustbin of professional studies is that it still offers an incredible number of valuable case studies on American military leadership. For example, Gen. Douglas MacArthur had no shortage of personal bravery; he was a highly decorated World War I combat veteran. As a commander, however, he was not perfect.

In war, missteps are inevitable. The bigger the responsibility, the longer the campaign, the greater the stakes and the more far-reaching the objectives, the better the odds that more misjudgments will be made. The problem for generals and armies is that they can’t outlive all the historians who will write about them. Historians aspire to objectivity and truth-telling but in the end, they are storytellers, the act of which entails leaving out some details and underscoring others. This gives readers a sense of the people, place, time and plot that drive the narrative form.

War stories are no different. Historians must make the confusing, obscure, ambiguous and contradictory straight, logical and organized. Often, this reduces people and practices to stock figures. One side, person or decision stands for good, while another stands for bad. It can make men like MacArthur appear to be heels in one history and heroes in another. 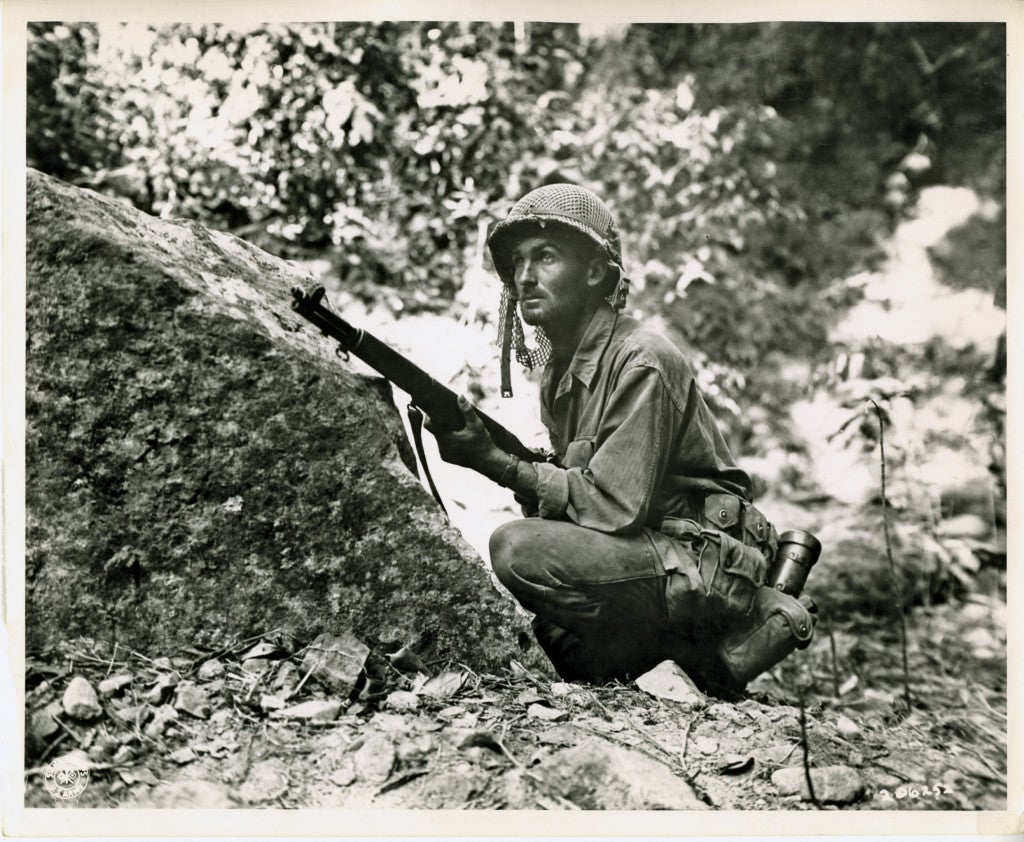 Technical Sgt. Wilburn L. Kirksey during the Battle of Luzon in the Philippines in March 1945. (Credit: U.S. Army)

Controversy Comes With Command
In reality, of course, military leaders are only human. MacArthur was, in many ways, typical of American World War II leaders—decent, albeit imperfect, men fighting for liberty more than glory.

Generalship in World War II also reflected the diverse character and individualism of American society—diversity that extended to the very top. The MacArthur/Marshall divide was symptomatic of the American command. While MacArthur operated in the Pacific largely as an independent, Gen. George C. Marshall directed the rest of the war from the banks of the Potomac in the newly built Pentagon.

Military leadership was a fractious band of brothers, a witch’s brew of personal ambition, favoritism, prejudice, combative personalities, uneven skills and contrasting strategic visions. Yet all put the needs of the nation first. The proof of that can be found in numerous battles.

It takes a lot of digging to get at the truth of these stories. That’s because the conflicts among leaders sparked a fight for legacy that began long before the war ended and continued long after. Legacy squabbling such as this continues to this day. It’s a healthy war of words that fosters critical thinking and sharpens professional judgment.

War is the ultimate competition for supremacy among foes; it remains the same regardless of technology, politics or geography. Understanding as many wars as possible makes for the most intuitive and decisive of military leaders, and World War II still serves as one of our deepest reservoirs of relevant knowledge.

James Jay Carafano is a vice president of the Heritage Foundation, responsible for directing the Washington, D.C., think tank’s research into matters of national security and foreign relations. He served in the Army for 25 years.