Forty-two years after the U.S. Army ended conscription, it should consider the natural sequel: the end of compulsory service contracts.

Imagine taking a job with almost no required education or experience and with paid, on-the-job training. The employer promises not to fire any applicant for anything short of a felony conviction. The caveat? Anyone who takes the job and then quits commits a federal offense.

This is a dream offer for any underqualified slouch able to meet minimal requirements and show up more or less on time, most of the time. On the other hand, for people who could excel wherever they go—recent college graduates, perhaps—the prospect of not being able to reconsider for three years will only amplify any reservations they already have.

As a final disincentive, the contracting process causes the Army to offer re-signing bonuses each time a soldier’s contract expires. These bonuses move compensation away from the soldier’s base pay, making the listed yearly salary look significantly worse for a person considering making the Army a profession (as opposed to needing quick money to balance irresponsible spending choices).

In the March issue of ARMY, Capt. Tim Lambert made the argument for why the Army needs college graduates among the enlisted ranks. Unfortunately, he suggested that the best reason graduates have to join the Army is the difficult job market that is keeping nearly half of all recent graduates from the jobs they really want. The Army should not be content to be a fallback position for underachievers. The modern Army must focus on more than advertising, and structure its compensation plans and personnel management to attract intelligent high-achievers into its formations.

Soldiers already in the Army may likewise be wary of extending their contracts for several years. This was my own experience when I left active duty for the National Guard. I was not willing to commit to another two or three years with little idea what that would mean when Operation Iraqi Freedom ended. I probably would have stayed indefinitely if I could have done so with some measure of control over my immediate destiny. As Secretary of Defense Ashton Carter told an audience at Syracuse (N.Y.) University, “People today want to think about their futures. They don’t like getting locked into anything.”

Portents for Quality of Service

Enlistment contracts not only make it harder to attract or keep qualified soldiers, they also prevent the Army from releasing low-performing soldiers. This occurs for two reasons. First, soldiers who have already decided they will not extend their contracts and have no major mission in their future—but have several months left before their term of service ends—have little incentive to excel in their job. While pride will often prevent these soldiers from failing minimum standards, the Army cannot complete its mission on minimum standards. The situation is complicated when soldiers at the end of their contracts are leaders passing their complacency and lack of enthusiasm on to junior enlisted soldiers at their most impressionable moments.

Military historian B.H. Liddell Hart argued for the end of conscription: “Efficiency springs from enthusiasm. … Enthusiasm is incompatible with compulsion,” and “skill and enthusiasm [are] becoming ever more necessary” for winning on the battlefield. The sentiment has not changed, and it must be understood to apply to those soldiers who signed up willingly but are now unenthusiastic. To again quote Hart, “every unwilling man is a germ carrier, spreading infection to an extent altogether disproportionate to the value of the service he is forced to contribute.” Whether he was once willing is irrelevant if he is unwilling now.

If good soldiers become mediocre, bad soldiers become a cancer. Leadership delays kicking these soldiers out even when regulations require beginning the separation process, such as for multiple physical fitness test failures. This inaction is because leaders know that eventually, the soldiers’ contracts will run out. Maybe their sergeants can turn them around before then.

Commanders must take action against incompetent or unruly soldiers and subordinate leaders. Otherwise, these bad apples could be around forever, failing basic standards, complaining constantly and devaluing the training of good soldiers by taking disproportionate amounts of their leaders’ time and energy. Without enlistment contracts, toxic soldiers would mostly kick themselves out, and commanders would no longer have an excuse to wait to take action against those holdouts who refuse to either meet the standard or move on.

Allowing soldiers to resign would also help supervisors rate their subordinate leaders. Where disproportionate numbers of soldiers are resigning or threatening to resign, higher commanders can track what is likely an issue of ineffective leadership and correct the problem before it becomes even more harmful to mission readiness.

This would require commanders to understand the difference between a toxic leader who causes good soldiers to hate their jobs; a demanding leader under whom sham artists suddenly realize that the Army is no longer the closest thing to a free lunch; and a soft leader whose mediocre performance is just good enough to keep anyone from feeling uncomfortable.

What About the Cost?

The cost of initial as well as some specialized training cannot be dismissed and provides a good reason for maintaining contracts. The first two years of service could remain at a lower level of pay with a significant jump or a bonus for completing two years in good standing, rather than simply for showing up the first day. In addition, the eight-year mandatory service obligation should not be altered; soldiers resigning sooner would still be liable to be called up in time of war.

Certain schools or MOSs—for example, the Special Forces Qualification Course, Ranger School or the new cyber warfare school—could require a commitment to serve a certain time after completion. If acting Under Secretary of Defense for Personnel and Readiness Brad R. Carson is serious about making a change, however, the end of compulsory service should be part of the revolution.

Enlisted men and women are no longer conscripts awaiting their first chance to bolt. They are, or ought to be, willing and committed volunteers who are expected to be capable, agile leaders. The line between commissioned and noncommissioned officer duties blurs in the face of increasing firepower and the increased need for initiative at the lowest levels.

In 2014, a Harris Poll found that military officer is considered the second-most prestigious occupation in the nation. That same year, a CareerCast survey found that enlisted personnel had chosen the third-worst profession. It is time for the Army to start treating its NCOs like the professionals it expects them to be. Getting rid of service contracts, and being more selective about who we keep in the ranks, is a step in the right direction. 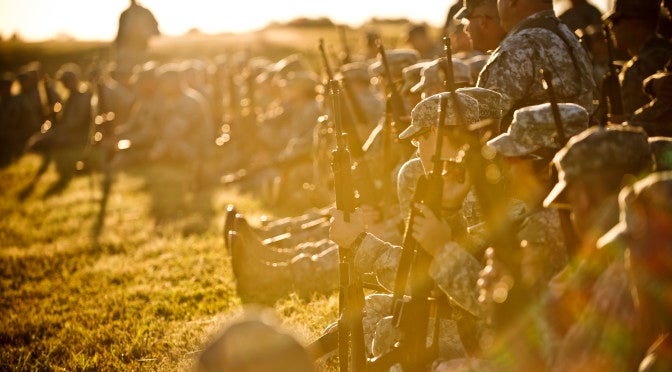