Before the anger and the divorce, before four tours to Iraq and Afghanistan, before the explosions and the pain, Staff Sgt. Daedan Jackson had been just a kid planning to go to school.

“It just sort of happened,” said Jackson, now 34, on joining the Army. His girlfriend at the time was in ROTC, and the plan was that she would join while he went to school. “The next thing I knew, I was the one at the MEPS [military entrance processing station] taking the oath.” That was in August 1999. “I didn’t think it would be a good career choice. I didn’t like people telling me what to do, but when you have one child and another on the way, you figure it out,” Jackson said.

Next came deployments: two each to Afghanistan and Iraq, not to mention many more temporary duty assignments to Southwest Asia. His marriage failed. His children, the ones he worked so hard to provide for, didn’t even know who he was anymore. 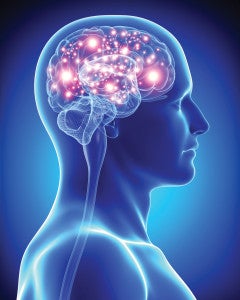 Then there were the explosions. “I was in quite a few and close to many,” said Jackson in his brusque Boston accent. He was never officially wounded. He doesn’t have a Purple Heart on his DD-214 or walk with a limp. There are no scars or tattoos that read, “Insert shrapnel here.”

That’s not to say he wasn’t harmed. After redeploying, Jackson began drinking to excess and getting into trouble with the law. Despite his reservations about the military, he had blossomed into too good a soldier for the warning signs to tip off his superiors.

“There were never any consequences for what I did,” Jackson said. “I did my job so well and was so well-liked by the chain of command that even when I had an encounter with the military police, nothing would happen. They’d just say, ‘Jackson deploys all the time and does whatever we ask,’ and it would just go away.”

It didn’t go away forever. In 2010, Jackson got into a fight. The police were involved, and they found he was carrying a pistol. He had been carrying the weapon for some time.

Signature Wound
Reluctantly, Jackson sought therapy within the VA under a court order and now receives care at its Translational Research Center for TBI and Stress Disorders (TRACTS), based at the VA Boston Healthcare System. He is one of many thousands of recent veterans to be diagnosed with a mild traumatic brain injury, or mTBI.

Often called the signature wound of Iraq and Afghanistan, mTBI occurs when a sudden trauma disrupts the brain and produces symptoms, which can include physical, emotional, behavioral and cognitive deficits. More often than not, TBI is diagnosed in veterans who also have post-traumatic stress disorder (PTSD) or other mental health conditions. The result is a complex constellation of symptoms.

When it comes to PTSD, the numbers are fairly well-defined. Roughly 11 to 20 percent of veterans who served in Iraq or Afghanistan have PTSD in a given year. TBI, on the other hand, is more elusive. A 2008 study by the RAND Corporation found that 19.5 percent of Iraq and Afghanistan veterans likely had experienced TBI during deployment. At the time, that meant some 320,000 veterans.

Those numbers are not without controversy, though. Part of the challenge lies in the way TBI is diagnosed. Typically speaking, soldiers exposed to primary blasts self-report their symptoms—such as any dizziness, memory lapses or seeing stars—to medical personnel.

“What we know about TBI in our veterans is based on what they can tell us—what they can self-report,” said Katherine Taber, assistant director of education at VA’s Mental Illness Research, Education and Clinical Center in Salisbury, N.C. “We’re asking for accurate reporting of an event that, by definition, changes or alters consciousness and that occurred under life-threatening and rather complex conditions. Human beings remember what is important to them. Under those conditions, I can really understand how some of the nuances of how you felt might not be the thing you remember.”

Countless Variables
Imagine an injury with no outward symptoms that could take years to manifest. Now imagine you don’t even know specifically how that injury occurs. When a bullet or a hunk of shrapnel enters the body, clinicians and scientists can track the path it took by studying the flesh. They can calculate the ballistics and the angle of entry, but what about pressure waves, which are essentially invisible?

“As far as mechanisms, a pressure wave going through the brain is different from an impact. The forces are different,” Taber said. “There are many possible injury mechanisms in addition to stress and sheer waves. The variables of what is really happening inside the brain are very great.”

Add to that the fact that soldiers don’t all start with a blank slate. Childhood traumas, sports injuries and blast repetition have been proven to affect a person’s resilience to mTBI.

“Every patient has a different pattern,” Taber said. “All our research techniques are based on group comparisons, but what do you do when the group, while they might all have TBI, doesn’t all display the same anatomical signature?” 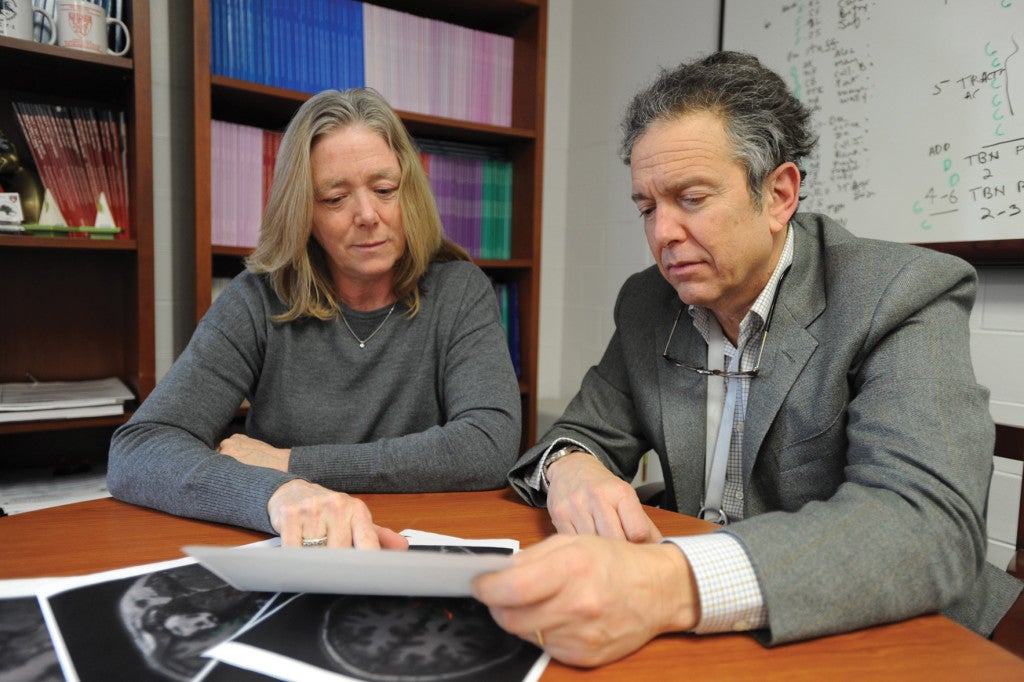 Blast Dynamics
Then there are the dynamics of the blast itself, said Dr. Robin Hurley, associate chief of staff for research and academic affairs at the Salisbury VA Medical Center and a professor at Wake Forest School of Medicine. “It’s where you were. Were you in a vehicle? Were you on the road? How far from the explosion were you? Where were you facing? Was your head turned to the right or to the left? How tight was your helmet? Was there a wall behind you? The factors that can complicate this are almost unfathomable in number.”

At TRACTS, where Jackson is a patient, researchers are working to sort out the minutiae in order to better understand and therefore better treat veterans who have been exposed to blasts. Given all the clinical mysteries, it’s easier to understand how soldiers like Jackson, who didn’t necessarily experience typical concussive symptoms as a result of combat explosions, could slip through the cracks. 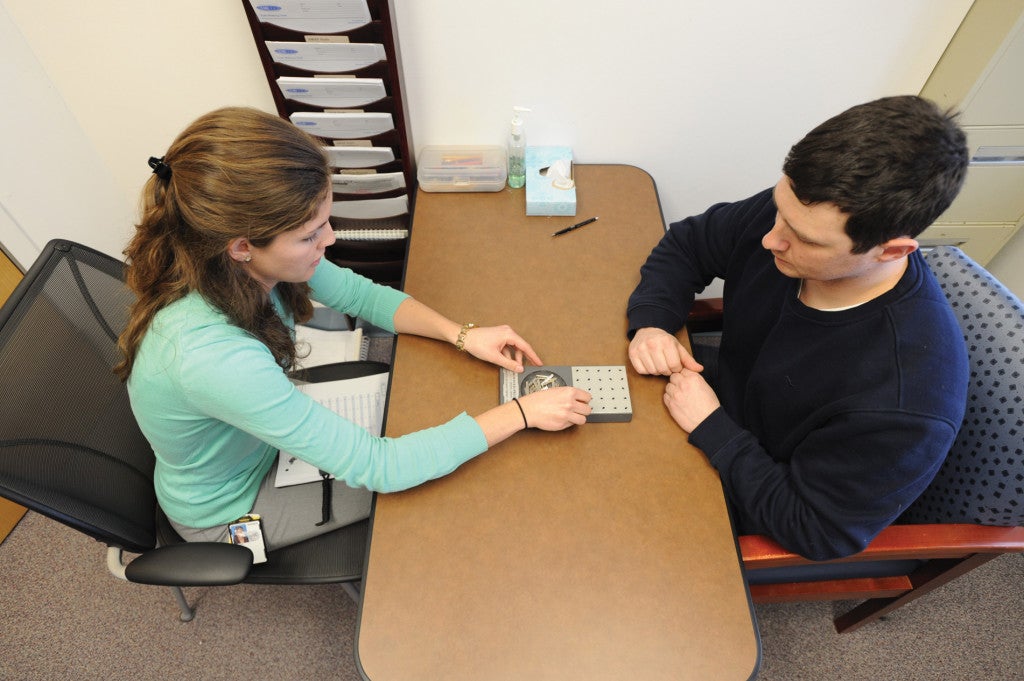 “These soldiers are coming back with lots of co-occurring conditions, so what we’re doing is trying to find out as much as possible about all the different problems in these veterans: their psychiatric issues, their neurobiological issues and even their physiological issues,” said William Milberg, director of TRACTS and a professor of psychology at Harvard Medical School.

“This is really the first time in American history where we’ve seen so many veterans suffering from both mild traumatic brain injury and PTSD at the same time, and this reflects the nature of blast injury,” said TRACTS director Regina McGlinchey, associate professor of psychology at Harvard. Both Milberg and McGlinchey are also with VA Boston’s Geriatric Research, Education and Clinical Center.

That’s not to say explosions are unique to Iraq and Afghanistan. Armies have been blowing each other up since the advent of gunpowder. “What’s different now is that soldiers are surviving blasts that previously would have killed them,” said Meghan Robinson, a health science specialist at the VA Boston Healthcare System who recently authored a study with Milberg and McGlinchey on the effects of close-range blasts on the brain.

3-D Brain Mapping
For those veterans who do have confirmed mTBI, there’s little debate about the presence of certain changes in the brain. Though sometimes subtle, these changes can affect the brain’s structure and function and, as a result, the mind and emotions.

In one study conducted at the VA Puget Sound Health Care System in Seattle, for example, researchers compared 12 Iraq War veterans with mTBI to 12 community volunteers. Both groups underwent a form of 3-D brain mapping and neuropsychological assessments. Researchers found the veterans with mTBI had decreased metabolic rates in parts of their brains. They also scored lower in verbal fluency, cognitive processing speed, attention and working memory than the control group. In fact, their results were similar to patients with cerebellar lesions.

The injuries don’t stop there, though. With mTBI, veterans face an injury that is part physical, part mental. The resulting injury is something that, to quote Winston Churchill, is somewhat of “a riddle wrapped in a mystery inside an enigma.” 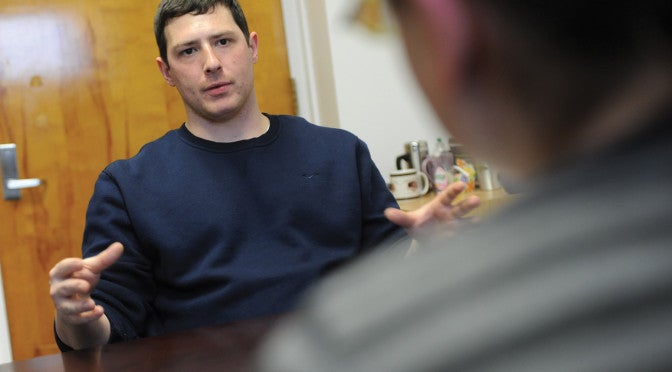 “Because these injuries have to do with blasts, people are witnessing traumatic and horrifying events that would have killed them in the past,” McGlinchey said. “They’re surviving physical injuries but are receiving psychological injuries as well. That’s why we see such a high rate of co-occurring TBI with stress-related disorders like PTSD, anxiety and depression.”

The answer, according to TRACTS investigators, is to not focus on one event but rather to expand the research approach to look at a lifetime of potential brain trauma, from brothers throwing rocks at each other when they’re kids to an explosion in Kandahar.

Jackson, meanwhile, has a girlfriend and recently passed the firefighter exam for the Brookline, Mass., Fire Department. Perhaps most notably, he’s halfway through a course of cognitive processing therapy, which he calls “torturous.”

“You rehash an event or series of events over and over and you write about them,” Jackson said. “They try and change your perception about the event. To me, it’s like I have to do homework and then I have to read it aloud. These are things I just want to avoid but I realize that avoiding it isn’t really that great either, because I end up dealing with it anyway.

“Sometimes I still have really hopeless days. I missed out on so much of my children’s lives. There’s stuff that bothers you and you don’t even know it. I mean, it’s a work in progress.”