The dual realities of an increasingly volatile Middle East and fiscal austerity after 13 years of war have led DoD and the military services to explore new initiatives on how to achieve security requirements outlined in the 2012 Defense Strategic Guidance and the 2014 Quadrennial Defense Review.

To better understand the great utility of the CF-J mission, it is useful to highlight and reference several of the current and relevant requirements set forth in the 2012 Defense Strategic Guidance. These include:

The 2014 Quadrennial Defense Review builds on these priorities and incorporates them into a broader strategic framework, emphasizing three pillars:

- Protect the homeland, to deter and defeat attacks on the United States and to support civil authorities in mitigating the effects of potential attacks and natural disasters.

The CF-J mission contributes in measurable ways to achieving these priorities while nesting into this strategic framework. 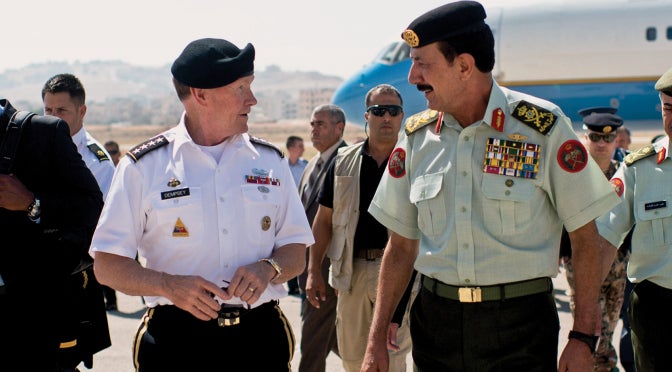 Defining CF-J
While the 1st Armored Division provides the core of the deployed regionally aligned force that initially consisted of approximately 100 soldiers, CF-J is made up of a mix of forces from all services as well as interagency and nongovernmental organizations. Additional joint enabling personnel complement the 1st Armored Division contingent to fill a variety of assignments and manage a wide array of responsibilities throughout the CF-J headquarters. In addition, U.S. Army Central Command (ARCENT) and its subordinate units maintain a significant presence in the headquarters.

The Army’s operational-level deployment of regionally aligned forces in Jordan provides the opportunity to seek a balance between the employment of operational-ready and Total Army forces and capabilities. The deft, light footprint of CF-J comes at a remarkably low cost to the American taxpayer. A small investment in the CF-J mission provides an outstanding return on investment in meeting the President’s strategic priorities.

CF-J’s comparatively compact size underscores the U.S.’ status as guest of the Jordanian government, operating within existing Jordanian bases to keep a light footprint. This provides the important message to the Jordanian population that U.S. presence is not meant to unduly influence the government or to somehow occupy their country, but that the CF-J mission stands as the hallmark of a voluntary, mutually beneficial partnership between close allies. 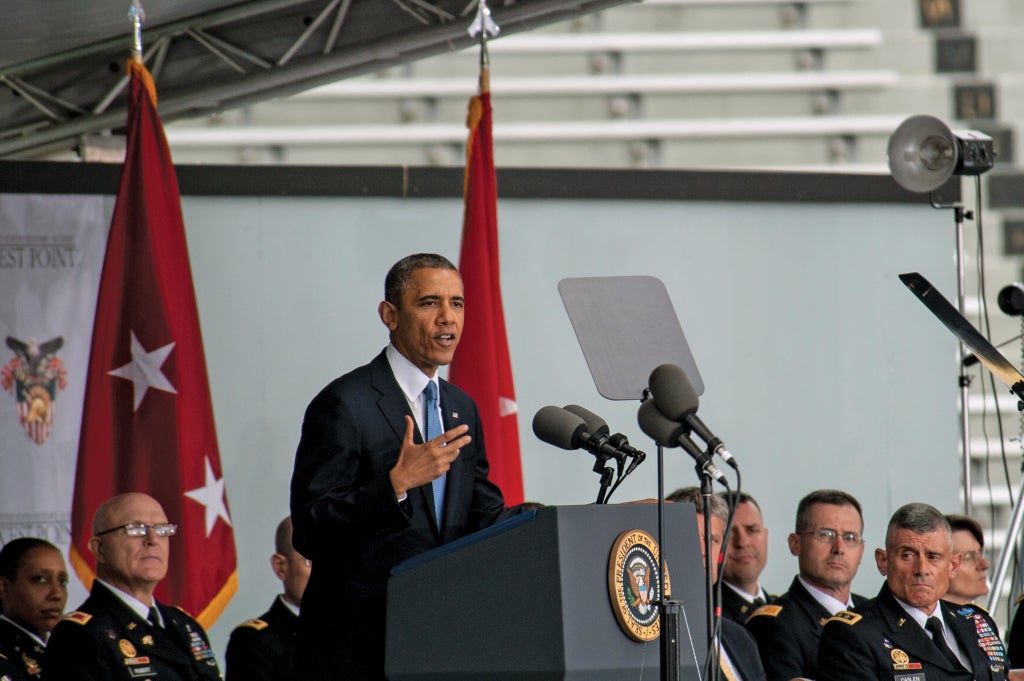 A Stabilizing Presence
At West Point’s 2014 commencement ceremony, President Barack Obama clearly expressed the integral role of the U.S. armed forces in providing security for the nation: “As the Syrian civil war spills across borders, the capacity of battle-hardened extremist groups to come after us only increases. Regional aggression that goes unchecked—whether in southern Ukraine or the South China Sea, or anywhere else in the world—will ultimately impact our allies and could draw in our military. We can’t ignore what happens beyond our boundaries. … The United States will use military force, unilaterally if necessary, when our core interests demand it—when our people are threatened, when our livelihoods are at stake, when the security of our allies is in danger.”

CF-J affords this kind of security for Jordan while also providing a stabilizing presence in the region. The U.S. presence in Jordan as manifested through the CF-J mission provides an important strategic mechanism to monitor the actions of the Islamic State group—one responsible for catastrophic political upheaval, immense bloodshed, and human suffering in Iraq and Syria. While the CF-J mission is not currently tasked to directly engage the Islamic State, the U.S. footprint in Jordan plays a critical role in observing and understanding its actions to provide critical strategic context to U.S. and allied decisionmakers.

Project Power Despite Challenges
CF-J is a prime example of how the Army can effectively maintain a responsive, forward-deployed force posture at a modest cost in terms of resources and staffing. CF-J’s configuration has been rapidly tailored to support a variety of capabilities, including air defense artillery elements, special operations forces and F-16 augmentation. CF-J achieves this “plug and play” model by tying into ARCENT’s robust backbone of enabling commands and theater architecture, leveraging the military partnership between the U.S. and Jordan, multinational exercise opportunities, and a comprehensive network of relationships and planning efforts.

Together, these mutually supporting efforts lay the groundwork for CF-J to support potential contingencies if required. For example, the 1st Armored Division and ARCENT work together in order to provide the Joint Force with critical enablers that are essential to operating in an expeditionary environment like Jordan. CF-J’s ability to reach back to 1st Armored Division, the Theater Intelligence Brigade and ARCENT provides the option to surge assets in response to strategic contingencies, all while fostering a synergistic relationship between conventional and special operations forces.

Refugee Crisis
Also in his West Point speech, Obama said, “America’s support for democracy and human rights goes beyond idealism—it is a matter of national security. … Respect for human rights is an antidote to instability and the grievances that fuel violence and terror.” The President’s statements directly reflect the third requirement in the 2012 Defense Strategic Guidance. Jordan faces a growing burden from the humanitarian crisis resulting from the overflow of more than 600,000 refugees from the Syrian conflict since 2011. Further, it now faces a very real threat from jihadi militants such as the Islamic State. The Sunni insurgent advance across Iraqi towns and cities has plunged the country into the worst crisis it has seen since U.S. troops left in 2011 and threatens to make the refugee situation in Jordan worse.

Emboldened by its gains in Iraq and eastern Syria, the former al Qaeda affiliate took to social media to announce that it would “soon bring the Islamic state” to “brothers in Jordan.” Cognizant of this threat, then-Secretary of Defense Chuck Hagel identified Jordan as “one of the most important U.S. partners in the region.” As such, the U.S. has a vested interest in sustaining its military presence in Jordan in order to foster continued contingency planning, improve joint readiness and prepare for a range of scenarios.

Since its inception, CF-J has actively collaborated with numerous U.S. government agencies, including the State Department and the U.S. Agency for International Development, to confront pressing humanitarian issues in Jordan. These critical CF-J relationships helped facilitate interagency cooperation and played an integral role in supporting U.S. diplomatic and developmental efforts.

Tangible Benefits
The Jordanian armed forces reap a number of benefits from having CF-J in close proximity. For example, U.S. air and missile defense assets are synchronized with the Royal Jordanian Air Force through linked radars to assist in controlling and monitoring airspace. U.S. F-16 pilots operate with their Jordanian counterparts, providing them with sound doctrinal foundations for interoperability. CF-J holds weekly meetings with the Jordanian armed forces in order to provide them updated situational awareness and intelligence. CF-J’s current structure is partnered with virtually all staff and command elements of the Jordanian armed forces.

U.S. special operations forces provide oversight and mentorship to their Jordanian counterparts when it comes to schooling and training. CF-J, with augmentation support from the 1st Armored Division, provides necessary manpower and resources for U.S. Central Command-partnered Jordanian-based exercises such as Eager Light and Eager Lion. These events influence how the Jordanian army conducts its tactical operations. The Jordanian army is learning the planning processes it needs to increase coalition interoperability during these multinational exercises. As a result, they are significantly better prepared for whatever contingencies they may face. 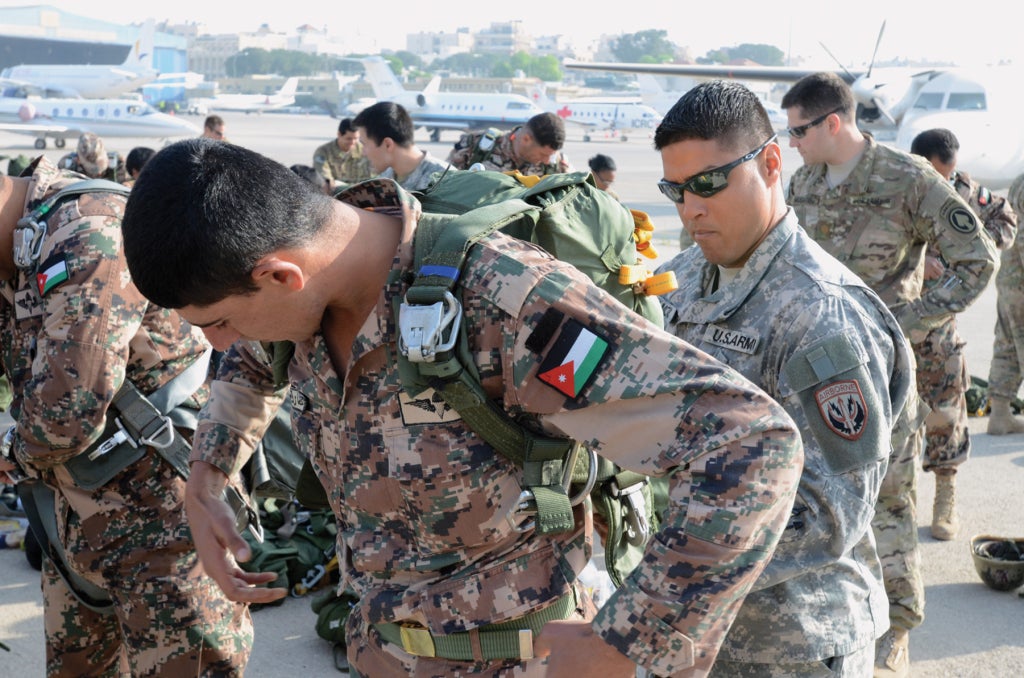 Intelligence sharing between Jordan and the U.S. is one example of the mutual benefits facilitated by their connection. CF-J stands as a significant contributor to the intelligence community of interest within U.S. Central Command’s area of responsibility. Given unavoidable regional intelligence gaps, the relationships CF-J maintains within Jordan provide key situational awareness to the intelligence community. Partnering with the host nation has enabled the expansion of information essential to the situational awareness along both the northern and eastern borders of Jordan, including southern Syria.

These relationships also fill intelligence gaps central to the operations of violent extremist organizations within the Levant region. CF-J’s ability to collaborate and coordinate with Jordan’s intelligence community greatly increases the information flow to both U.S. Central Command and the intelligence community at large. Information shared during numerous exchanges between the U.S. and host nations cannot be replicated by national or theater intelligence assets.

Always Adjusting, Adapting
The Army recognizes the threats and opportunities described by the President and outlined in our security strategy documents. Therefore, the Army has aggressively developed and implemented multiple ways for regionally aligned forces to meet these evolving security challenges in a resource-constrained environment. Obama has asked for a stabilizing presence, support for our allies, a projection of force and a willingness to act on behalf of human dignity.

CF-J achieves these objectives and much more. The planning teams have provided a foundation and blueprint of the area of responsibility, which will streamline any call for troops in response to direct threats to Jordan and, by extension, the region. The military partnership and training will continue even in the face of external extremist threats. The decision to sustain this regionally aligned force stands as a centerpiece in protecting American and Jordanian interests in the Middle East and is critical to building, deepening and sustaining the relationship between close allies.

The U.S. must therefore remain cognizant that while its presence cannot fully preclude any possible attack on Jordanian sovereignty, neutralizing any such threats remains critical to our interests in the region. Thus, CF-J is a force multiplier providing the U.S. military and its allies a full complement of the tools necessary to confront effectively the military, social, political and humanitarian challenges they face in this part of the world.

Brig. Gen. Joseph P. Harrington is a career field artillery officer currently assigned as the deputy chief of staff, operations, Allied Rapid Reaction Corps. He previously served as the director of U.S. Central Command Forward-Jordan (CF-J). He is a 1987 graduate of the Richard Stockton College of New Jersey.

Maj. John N. Dvorak is an FA-57 simulation operations officer and currently serves as the chief of exercises and simulations for the 1st AD. He previously served as an instructor in the Department of English and Philosophy at the U.S. Military Academy and as an Afghan Border Police Mentor.

Maj. Jason J. Main is the knowledge management officer for the Asymmetric Warfare Group at Fort George G. Meade, Md. He most recently served with the 1st AD and CF-J and is a former military police officer.