The Power and Pitfalls of Gender-Specific Mentorship

Mentorship is a critical investment tool that should be used to cultivate the strength and diversity of the Army. To sustain the talent of a workforce, organizations invest in their people through formal and informal mentorship. The Army thrives because of its diversity of talent, and mentorship is critical to ensure diverse leaders within the ranks.

The Army defines mentorship as “a voluntary and developmental relationship that exists between a person with greater experience and a person with less experience, characterized by mutual trust and respect.” Successful and experienced military leaders take time to personally develop subordinate leaders to ensure the next generation of leaders is ready.

Mentorship is not based on gender, but on experience and skills. This implies that mentorship is a tool that should be used for development that promotes continuity of an institution and values that transcend differences of gender, race and national origin.

Is there a need to have formalized female group mentorship programs in this era of the Army? In this article, we will discuss the pros and cons of gender-specific mentorship. The viewpoints are organized around three topics: gender-specific topics, inclusion and trust.

Women-specific issues are not the only basis for mentorship groups, but they can often take the forefront because it is much easier to address women’s issues with other women. There are issues men will never go through, such as menstruation, pregnancy, postpartum depression, hair regulations and others. New mothers have professional and personal hardships that are not easily understood by men. Intangibles such as postpartum depression or the changes the female body goes through after pregnancy might not be easy to talk about with men. Almost instinctively, women are able to help other women.

While gender-specific groups provide a safe space to discuss personal issues, they also promote segregation in the Army and allow soldiers to remain ignorant of others’ issues. Soldiers react to uncomfortable situations differently, and their reactions may cause a rift between them. Male and female soldiers should learn how to communicate with each other regardless of the topic. This is a must on the battlefield, in training and in everyday garrison operations.

If male and female soldiers do not build trust from the beginning, it can be disastrous in combat. Discussing topics that might be uncomfortable for the opposite sex can also be a great learning tool. The discussions will inform decisions in their present and future positions and build candor and empathy in senior leaders.

Women face unique challenges in the military and often have no one to discuss them with. Gender-specific mentorship groups provide an outlet for women who need assistance or guidance who don’t feel comfortable addressing their issues with men. Professionally, women in the Army are at a disadvantage because there are fewer women than men in almost every duty station and unit. Discussing hardships with someone who does not understand what you are going through can be tough. A woman might bring up what she perceives to be a sensitive issue and a man might brush it off as a minuscule issue. While neither side is at fault, there is a difference of opinion.

This difference could lead to more hardships for a woman. An example that many women have encountered is going back to work after having a child. There are many intangible issues that arise when a mother is separated from her child that men do not necessarily relate to. While this is a huge issue for women, men could easily brush it off because they might not understand. If the same issue was brought up in a gender-specific mentorship group, it could be discussed openly, and positive solutions could come out of the meeting. 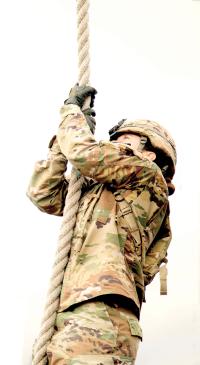 For some, there is a negative connotation surrounding the report of a Sexual Harassment/Assault Response and Prevention (SHARP) incident. By reporting, younger women might think they will be labeled in a negative way. Some of the biggest hurdles women face in the Army are SHARP- and equal opportunity-related. Women relate to women on these subjects because they have a basic understanding of how a situation is created and all the issues that surround it. Often, senior female leaders are able to use their experience and knowledge to influence how younger women think about how women are perceived. When it comes to sexual assault and harassment, women are capable of arming other women with tools to combat this type of behavior.

On the other hand, promoting gender-based mentorship groups implies women in the Army are not seen as equals or integrated. It is important to continue to push the limits of integration so women do not retreat into separation and segregation.

In 2015, a case study on gender integration by the U.S. Army Training and Doctrine Command Analysis Center concluded that women should be integrated into combat arms jobs and units. By 2016, women were integrated into combat arms jobs. The Army continues to move in a positive direction; separate but equal in actions and deeds demonstrates an antiquated mindset, promotes gender bias, and does not promote inclusion and togetherness, which ultimately undermines trust.

At times, men and women have different problems best addressed by someone who understands from their point of view. Gender-focused groups enable discussions to focus on the finer details of what it means to be a man or woman in the Army. For many women, it is much easier to discuss professional and personal issues with other women. No woman wants to portray weakness to the team, which makes female to female mentorship an absolute must for those who are looking for help.

While men and women fill the same positions in the Army, women make up just 15% of the service. Women in gender-specific mentorship groups can relate to each other’s professional and personal hardships and address gender-specific issues and perceptions that arise in the Army. In 2013, a brigade commander at Fort Bragg, North Carolina, started a gender-specific mentorship program because he felt more comfortable with women addressing women’s issues. This is a pragmatic way of mentorship. The brigade commander knew he wasn’t able to provide mentorship at the level the female soldiers needed, so he enlisted the assistance of female senior leaders. On the other hand, Army Regulation 600-100: Army Profession and Leadership Policy states, “Trust is the bedrock of our profession.” There are plenty of ways to develop leaders through mentorship, but an all-female or all-male group mentorship program might reinforce negative perceptions and biases of gender, hinder professional development and diminish trust. The exception to gender-focused group mentorship is for initial entry trainees. It is probable that their values and norms may not initially align to Army organizational culture. Gender-based mentorship helps inculcate and transition young soldiers into the Army. Without trust, there is no profession.

The Army must have a progressive mindset and a culture of trust to win our nation’s wars. In 1948, President Harry Truman’s Executive Order 9981 integrated military services based on race. That same year, Congress passed the Women’s Armed Services Integration Act granting women permanent status in military service. These presidential and congressional initiatives required racial and gender barriers be removed within the American military. To promote gender-based mentorship groups implies we are no better than we were before 1948. It is important to continue to push the limits of integration so the Army does not retreat into separation. The Army must see women as equals and allow people to choose how they want to be mentored.

All soldiers and leaders need access to professional and personal support in order to advance their professional and personal goals. This support may be tailored as a group for a gender or other specification such as race or national origin. Mentorship is a personal topic, and it’s not “one size fits all.” As your career progresses, you will have different needs, and the way you receive and give mentorship will change. The time and resources you commit to gender-specific groups, or not, is up to you.

Being part of a mentorship group is an individual choice and must be treated as such. Friends and colleagues will most likely have a different perspective on mentorship, and that is OK. Mentorship is about developing yourself and those around you. The goal is to ensure both men and women have a safe space to discuss issues, challenge critical thinking skills and progress as leaders.

Regardless of your choice to join or not join a gender-specific mentorship group, it is your choice.

Maj. Kristyn Felix is a logistics officer with Headquarters, U.S. Army Combined Arms Support Command, Fort Lee, Virginia. She has deployed to Iraq, Afghanistan and Africa. She is an ROTC graduate and holds a master’s degree in operational studies.

Maj. Ebony Thomas is a logistics officer with the U.S. Army Ordnance School, Combined Arms Support Command, Fort Lee. She has deployed to Bosnia, Afghanistan and Iraq, and has been stationed in Korea. She is an ROTC graduate and holds an MBA with a focus in public administration.