First a U.S. Soldier, Then an American Citizen

It might be difficult to find someone more aware of the significance of the Soldier’s Creed than Army National Guard Sgt. Abbas Mousa, who has been a U.S. soldier longer than he has been a U.S. citizen.

“America gave me peace, opportunities, freedom and dignity,” Mousa said. “I wanted to be part of this country. I wanted to learn how to fight because I was afraid of losing my new, safe home—America—like I lost Baghdad.” 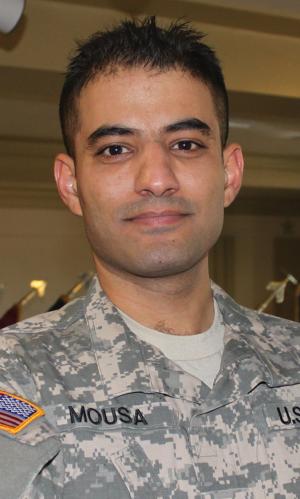 Mousa was born and raised in Iraq’s capital city. His connection with the U.S. Army began in March 2007, about a year after he graduated from Al-Mamon University with a computer science degree. Mousa moved to Contingency Operating Base Q-West in Northern Iraq, where he worked for nine months for a company that supplied sandbags to the base.

“Before I accepted the job, I was very nervous because we had heard bad things about the American soldiers from the media, especially after the Abu Ghraib prison scandal,” he said. “I was afraid that the soldiers might hurt me. But I was surprised. They were normal people, not evil.”

English is taught in Iraqi elementary and secondary schools, and Mousa’s college courses were taught in English. When soldiers discovered how fluent he was, he was tapped to become an interpreter and translator.

The soldiers “were like one big family,” he said. “They took me in like one of their own.”

His family in Baghdad knew what he was doing, but they kept it a secret. “Once you work for the U.S. military, you will forever be an al-Qaida target,” he said.

Mousa’s mother is Lebanese and Argentinean, and the family had already faced threats. “My family wanted to leave Iraq so bad since 2006,” he said. Two of his siblings had immigrated to the U.S. in 2007 and 2008 and after a kidnapping attempt, Mousa knew he had to leave, too.

Through a special immigrant visa for translators and interpreters, Mousa arrived in the U.S. in July 2009. (A sister came with him; his parents and four remaining siblings emigrated in 2013 and 2014.) He settled in Oak Creek, Wis., where his siblings lived, and began working on a master’s degree in economics at the University of Wisconsin-Milwaukee. He also worked full time for an internet retailer, but something seemed off.

“Living on a military base for 2½ years made me learn about the military culture before the American culture,” he said. “I missed working with the military.”

Mousa enlisted in the Wisconsin Army National Guard in June 2011. In May 2012, he became a U.S. citizen. He finished his master’s degree in 2015 and, eager to escape the Midwestern winters, focused his job search on the Washington, D.C., area.

“I visited D.C. for the first time back in 2010 and fell in love with the city,” he said. “I was fascinated with all the history that I learned just from visiting the sites and museums.”

He was offered a position with the Bureau of Economic Analysis in the U.S. Department of Commerce and moved to the D.C. area about a year ago. He is a human resources specialist with the D.C. Army National Guard.

Mousa is writing his memoirs and has told an abbreviated version of his life story through The Moth, a nonprofit group that holds storytelling events in U.S. cities that are broadcast on National Public Radio. He said there are some things he misses about Iraq, including “sitting on the banks of the Tigris River and throwing little rocks with my friend, talking about what we wanted to be when we grow up.

“But I do not miss anything from the period when the terrorists entered Baghdad and started bombing us left and right,” he said. “I also don’t miss living on the edge and being worried that I might be killed. I know how it feels living under terrorism, and I never want to experience that again.”

As for his adopted country, “So far I have been to 24 states, not counting layovers or drive-throughs,” he said. “I love how you can be at minus-20 weather in Wisconsin in January, yet you’re only a five-hour flight from 80 degrees in Miami. I love how different our big cities are. And American people in general are good people. They are smiley, and nice.”

“Today, I’m reaching mine,” he said, “and I hope you’re reaching yours.”