The U.S. Army that has been fighting desert wars for at least 15 years—25 years, if you look back as far as the First Gulf War—has finally created a training course for this arid environment. The three-week Desert Warrior Course at Fort Bliss, Texas, focuses on lessons about surviving in blistering hot sun and frigid nights that are well-known to Iraq and Afghanistan veterans. It also includes vitally important lessons in small-unit tactics and leadership.

The training course was launched last summer under the auspices of the 1st Armored Division’s Iron Training Detachment. It is modeled on the Army’s other environmentally themed training courses: the Jungle Operations Training Course in Hawaii, and the Cold Weather Leaders Course in Alaska.

“Courses like this are aimed at the most important leaders we have in the Army right now: the team leader, the corporal, the sergeant,” Plumb said. “The purpose of this course is really to create the next generation of leaders.”

Underlying that purpose, he said, is a recognition that the constant, years-long churn of deployments focusing on counterinsurgency has eroded basic combat leadership skills at that critical ground level.

“All we’ve done is deploy,” Plumb said. “We haven’t had home-station time where we really focus on and try to refine that level of leadership.”

Spc. Dylan Pike, a licensed vocational nurse with the 31st Combat Support Hospital at Fort Bliss, went through the most recent Desert Warrior Course. He admitted to having a bit of an edge coming in; he served as a staff medic for a previous course run.

“So I sort of knew what to expect,” he said with a laugh. Still, “they definitely hit that on the head,” he said of the concentration on small-unit tactics and leadership. “You really had to work as a team.”

Pike called going through the course “a really good experience. It made me think of those cool Army promo videos, all the stuff you never get to do while you’re busy with inventory and supply.”

‘All Soldiers Are Riflemen’
“The jobs our soldiers are doing in Iraq and Afghanistan are MOS-specific,” said Sgt. 1st Class Bryant Woodberry, the Desert Warrior Course’s NCO in charge. “But all soldiers are riflemen, no matter what their jobs are. We’re trying to give them some of that, and also show them a few things they don’t normally learn within their units, like survival skills and combat tracking in the desert.”

“I was thinking it would be mainly a survival course, but it was much more about tactical movement and battle drills,” said Spc. Renee Castillo, a field artillery surveyor with Headquarters and Headquarters Battery, 4th Battalion, 27th Field Artillery Regiment at Fort Bliss.

“But in that sense, I guess it was a survival course, surviving tactically in the desert,” she said.

The course, which has been offered quarterly since last summer and wrapped up its fourth run in late April, is built on a “crawl, walk, run” model, with those descriptors pinned to the first, second and third weeks of the training.

The “crawl” phase is classroom instruction and practical exercises designed to get a student body with myriad job specialties “on the same sheet of music,” Woodberry said.

The second, or “walk,” week gets into what one student called “the fun stuff,” when the course moves onto the Fort Bliss range that covers nearly 1 million acres stretching into New Mexico. This phase kicks off with a live-fire exercise that gives the students’ marksmanship skills a workout, to include having them shoot with their nondominant hand.

“We want to familiarize them both ways, right-handed and left-handed, with a variety of firing positions they may have to use in combat,” said one instructor, Staff Sgt. John Dunham. “If you get hit, you’ve still got to be able to fight.”

GPS-Free Navigation
The next day, students board a helicopter and fly to a remote part of the range for advanced desert land navigation instruction—without benefit of that handy gadget called a GPS. 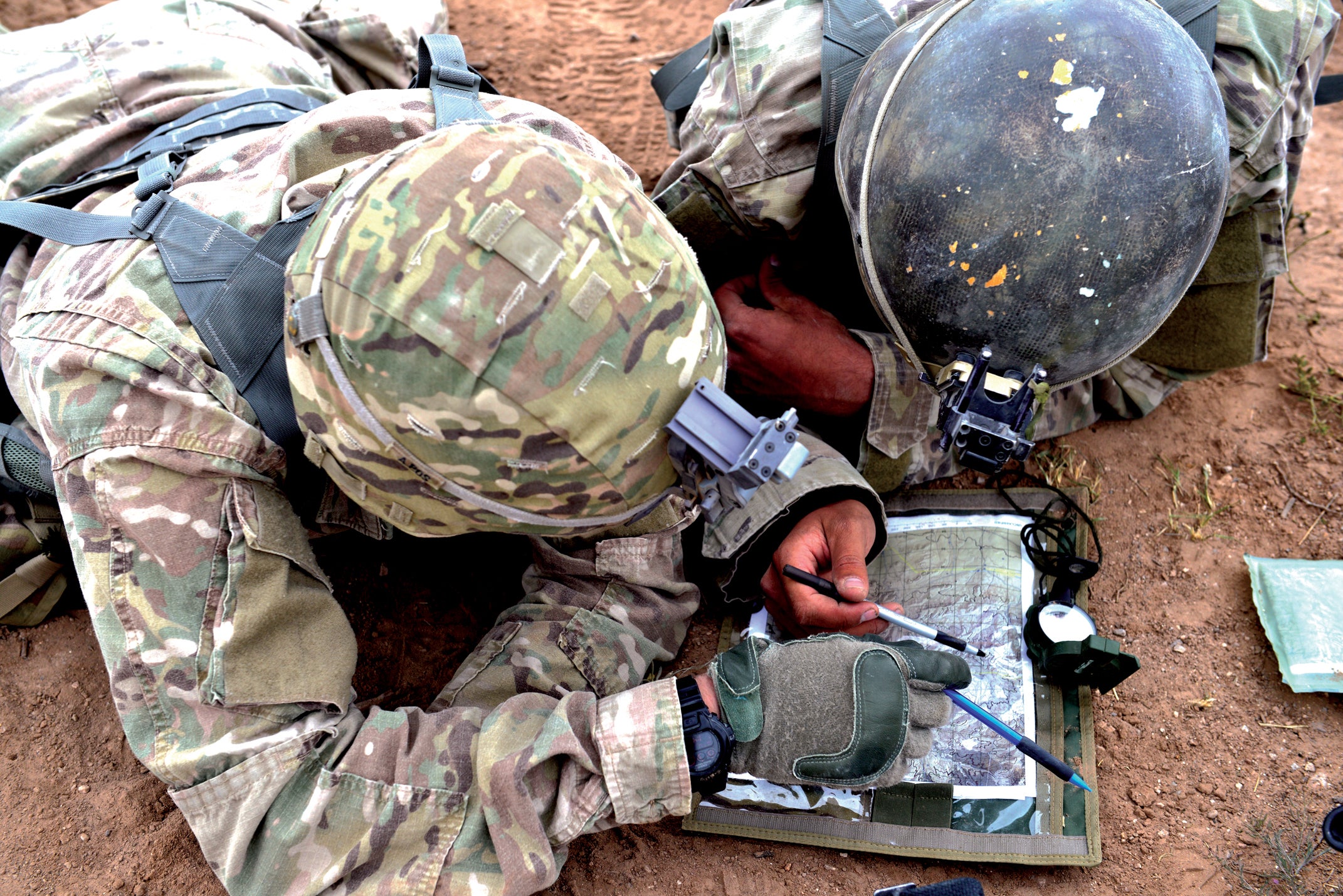 Students in the Desert Warrior Course are limited to simple tools to navigate.
(Credit: Chuck Vinch)

“We land them in a barren area; give them a map, a compass and a protractor; and tell them to figure out where they are and then move to a specified point based only on terrain association,” Dunham said.

The “no GPS” rule for that exercise is jarring for some students who have come of age in the era of technological proliferation. But Dunham, a veteran of two deployments to Iraq and one to Afghanistan, said going back to basics serves a purpose.

“In Afghanistan, even though I had GPS, I still had to pull out my map and get a fix on where” the enemy was, he said.

The second week also rotates students through multiple desert survival training lanes such as building shelters; starting fires; finding, collecting and filtering water; and setting snares and traps to catch food. They also are visited by staffers from the West Texas Regional Poison Center to be briefed on desert plant and animal life.

“They talk about what to do if you run into a rattlesnake, and the different kinds of spiders like the brown recluse,” Woodberry said. “They also go through quite a few of the plants: which ones are OK, which ones are dangerous and why. We let them eat cactus, and we tell them which bugs they can eat, if they want to. Most are like, ‘No,’ but you always have some soldiers who are like, ‘Yeah, let me have some of that.’”

The final week—the “run” phase—is dominated by a 72-hour field training exercise (FTX) that is largely free-form, with students divided into squads for clashes with an opposing force of troops from a permanent-party unit at Fort Bliss.

Sgt. Patricia Cisneros, an instructor, describes the exercise as “game-on. The students make the decisions. We basically just follow and monitor them to make sure no one gets hurt.”

Limited Resources
The exercise fully brings into play the survival training from the previous week, Dunham said. “The students are given limited resources” of food, water and ammunition, “and they have to figure out how to sustain themselves.”

That final training exercise “was a smoker,” Pike said. “We were split into two squads and basically told to survive for four days using what we had been taught earlier in the course, eating only one MRE a day. We were launching ambushes” and getting ambushed, with two or three contacts daily with the opposing force.

“I didn’t get very much sleep, since we were almost always on the move,” Pike said. “It was very intense, very challenging.”

Castillo agreed. “The FTX was definitely difficult,” she said. “Three MREs for three days; I definitely got hungry. But after a while, you don’t even notice how hungry you are anymore because you’re just constantly moving the whole time.”

“As soon as you get comfortable, here comes the [opposing force] attacking you,” she said, describing the experience as “pretty chaotic.”

Seasoned Instructors
The course’s 11 instructors are all well-suited to their training environment; each has notched multiple deployments to Iraq and Afghanistan. Instructors are hand-selected, “plucked out of their units because they’re intelligent and motivated,” Plumb said.

And there is no shortage of enthusiasm. “Being an infantry guy, I love this,” said Sgt. 1st Class Karl Christian, a Desert Warrior platoon sergeant who counts five trips to the Middle East and two to Afghanistan among nine total deployments in a career that recently passed the 20-year mark.

The instructors’ affinity for field training dovetails neatly with that of the students, who have embraced the unique aspects of the course, Woodberry said. 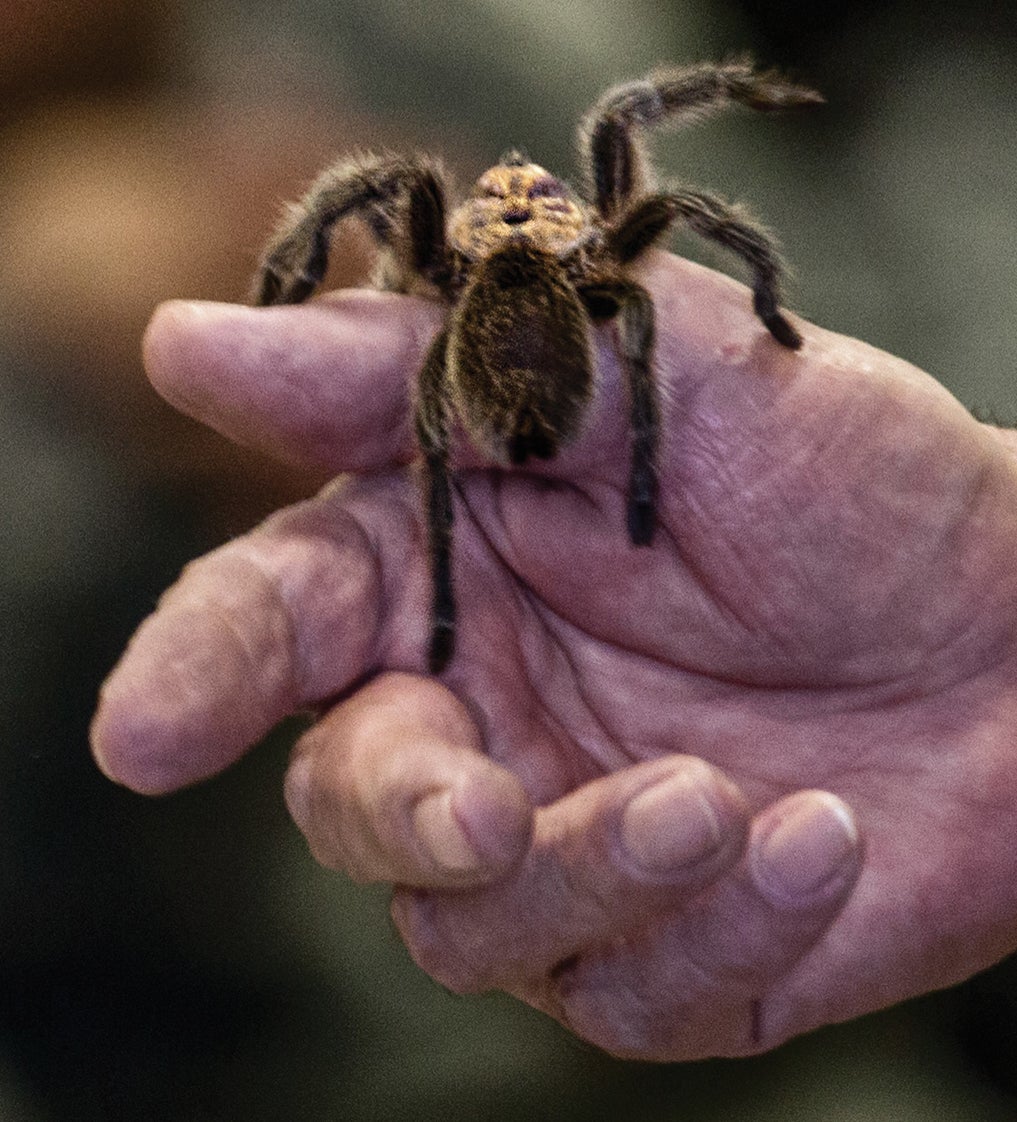 A session on animal and plant life includes a close-up of a tarantula.
(Credit: U.S. Army/Staff Sgt. Marcus Fichtl) 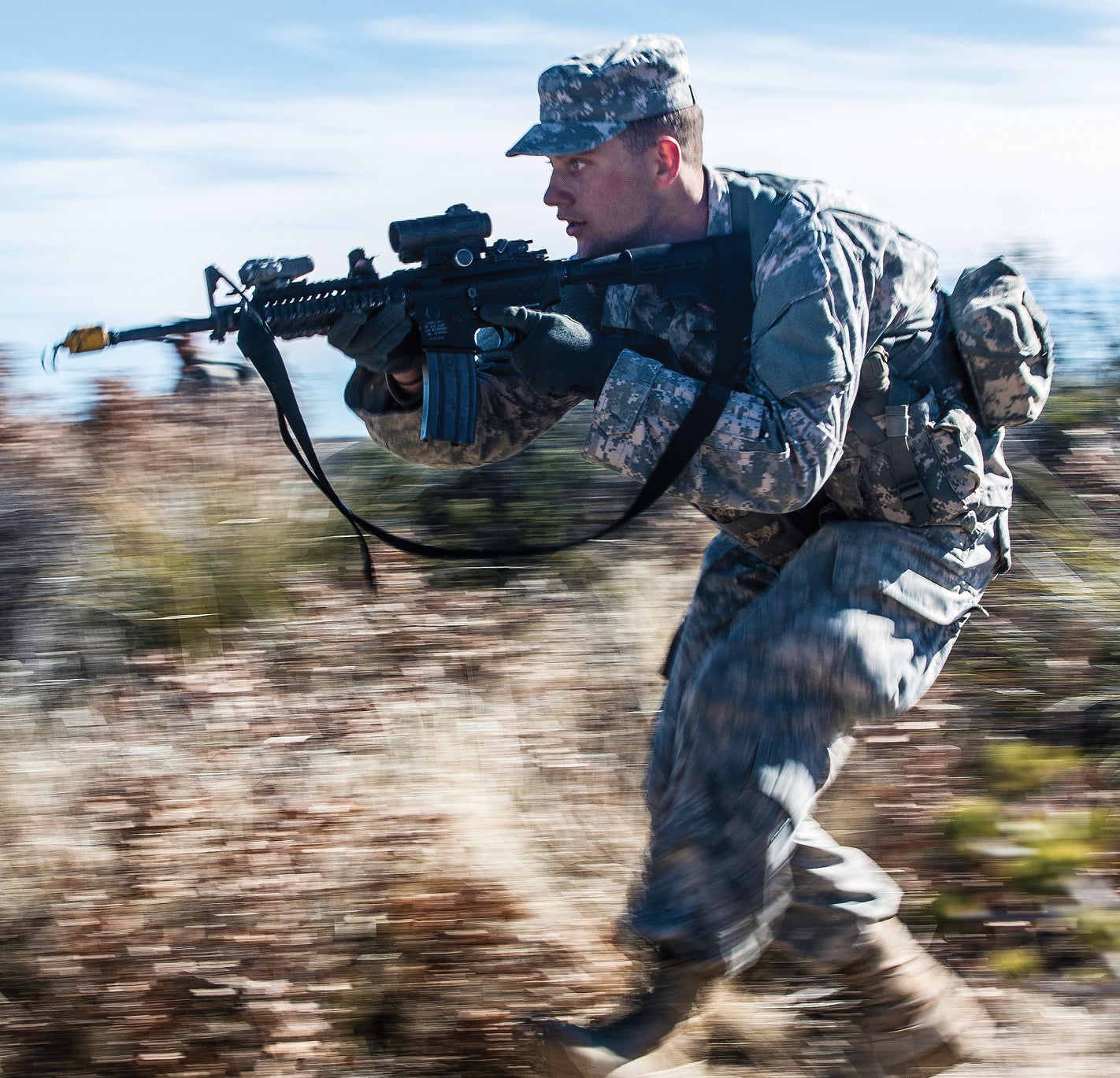 “Their favorite parts tend to be the combat survival and combat tracking, going out into the desert and hunting somebody down,” he said. “Few units in the Army do that kind of thing outside of Special Forces.”

“They also like trying to start fires, learning how to find potable water,” he said. “They love anything that’s not typical, everyday Army stuff.”

To drive home the small-unit leadership focus, students must take off their rank insignia while completing the training course. The idea is that during those three weeks, “all of them are serving in a leadership capacity,” Dunham said. “We want to teach them not only how to do it, but how to lead it.”

Building for the Future
The challenge now is to deepen the foundations and broaden the reach of desert training, which has strong backing from Maj. Gen. Stephen Twitty, commander of the 1st Armored Division and Fort Bliss, and Lt. Gen. Sean MacFarland, commander of Combined Joint Task Force-Operation Inherent Resolve in Iraq and III Corps and Fort Hood, Texas.

“The course is going extremely well and has proven very effective at enhancing the leadership skills, confidence and small-unit tactics proficiencies of our junior NCOs,” Twitty said.

However, Twitty is scheduled to depart Fort Bliss this summer, and the course still doesn’t have a dedicated funding stream. Instead, it is supported out of 1st Armored Division discretionary funds. Also, all students to date have come from Fort Bliss itself, in class sizes ranging from 25 to 32 soldiers although up to 56 can be accommodated.

Challenges Remain
Plumb believes the reach of the course can be expanded, but he acknowledged that challenges remain. For example, there’s no dedicated barracks space for soldiers who might come from other locations. “It’s not a ‘live-in’ course,” he said. “We’re trying to carve out barracks space, which will save a huge amount of money and time.”

Twitty said there are no plans to expand the course Armywide, but units nearby including Army National Guard and even Air Force outfits have shown interest. And he wants the course to evolve, mentioning plans to mix in an “even wider array of desert-specific material.” 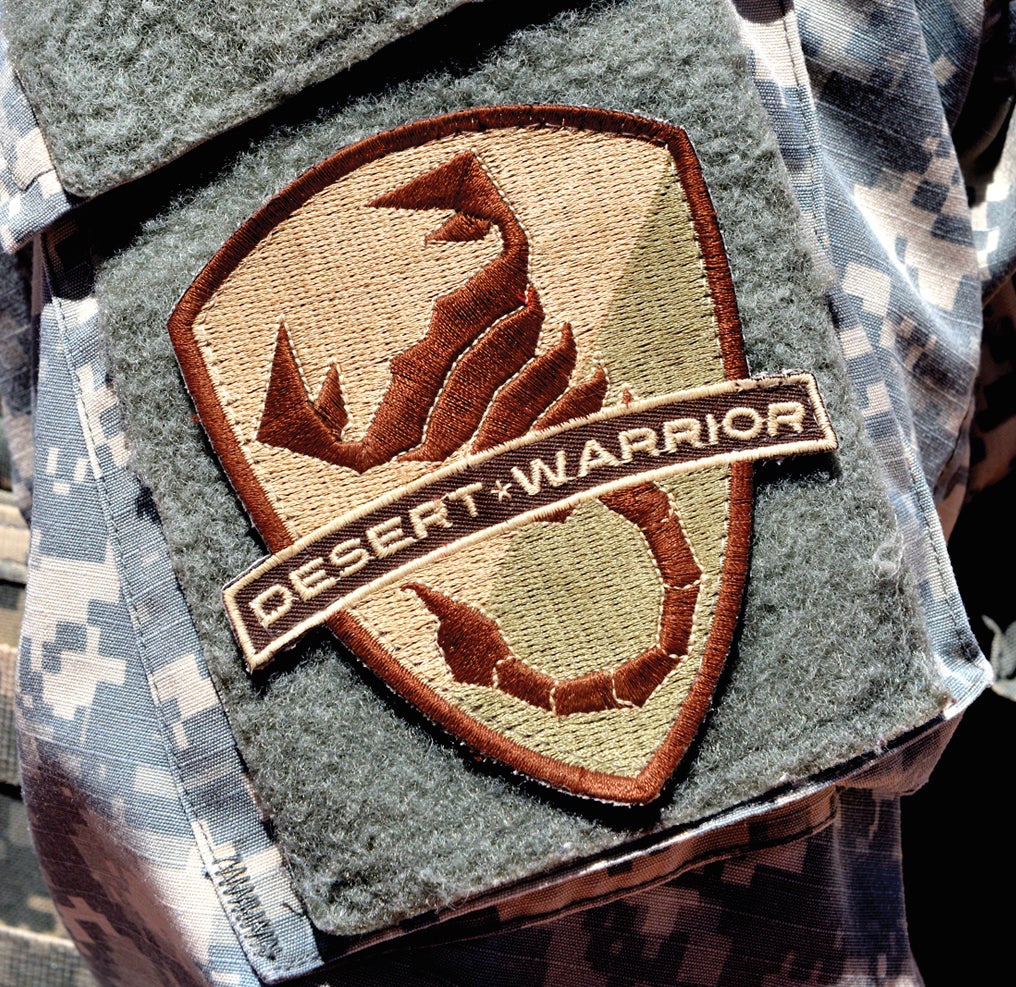 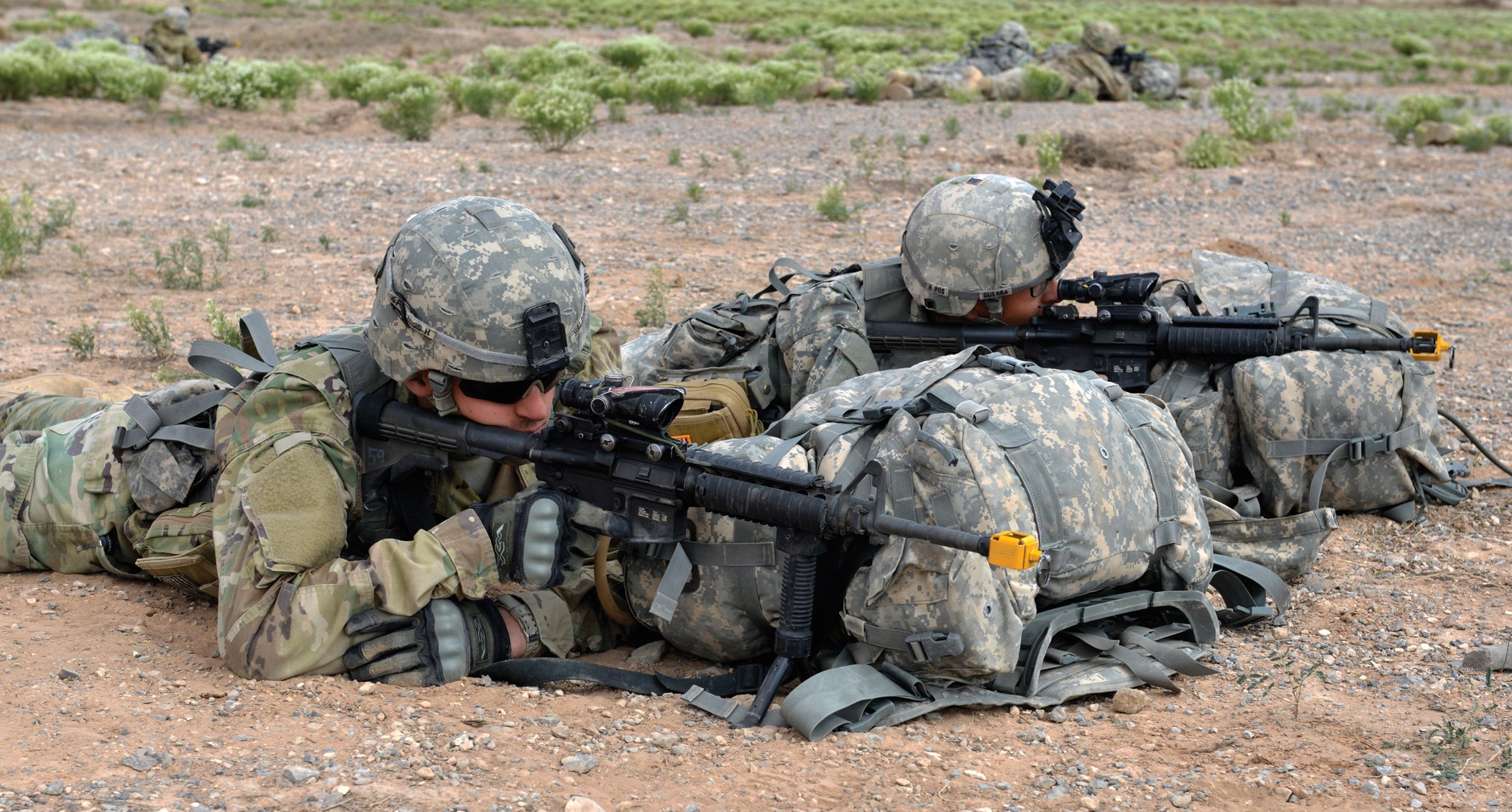 Plumb confirmed that the Arizona Army National Guard will send about 15 soldiers through the course soon. “We have the foundation laid. Now, it’s time to let people know the value of the course,” he said. “Send me your people, I will train them and return them to you better than when you sent them to me, and that will help you with your mission.”

Pike, who will make his first deployment in August to Kuwait, said he will “definitely take some things from this course on my deployment, starting with just being more aware of the desert environment. There’s a lot I didn’t realize about the effects of heat, sand and sun not only on people, but on equipment. I just feel a little more confident in case anything crazy happens.”

The ultimate selling point of the Desert Warrior Course is that it can give small-unit leaders a sharper, tougher edge in the harsh, forbidding environment that likely will remain the Army’s focus for a long time to come, Woodberry said.

“You’re going to find yourself out there in the desert with your team,” he said, “and you’ll need something from this course.”