Some 20,000 Chinese Americans served their country in World War II and were connected to the history of the Chinese in America in ways they might not have fully understood.

These young men and women were products of decades of struggles by their parents and grandparents to become American. Anti-Chinese sentiments in the U.S. were a constant reminder that Americans saw them as different and excluded them. Some enlisted, and some died, before the Chinese Exclusion Act of 1882 was finally repealed in December 1943.

But none of that mattered to these patriotic young men and women. When they saw the Stars and Stripes, they were filled with pride. They viewed it as a symbol of hope and a beacon of freedom to preserve and protect. Maybe they had something to prove: that they were more American than their peers, who took their nationality for granted. Being American was the core of their identity. It showed in their actions and in their numbers. The 20,000 Chinese Americans who served in World War II represented about 25% of the Chinese population in America. That was the highest percentage of service for any American ethnic community in World War II, according to the website ChineseAmericanHeroes.org.

Two young men who served the U.S. in World War II—one Chinese, one Chinese American—came from strikingly different, yet similar, backgrounds. Both were grandsons of transcontinental railroad workers, and both came from families that suffered in the 1880s from the effects of pervasive anti-Chinese attitudes and legislation.

In spite of this, both men performed heroically in different theaters in World War II, on opposite sides of the world. Both men were destined to receive Silver Star medals for gallantry in action within 10 months of each other.

After the war, the job of getting on with their lives, as well as their natural humility, pushed the Silver Stars into the background. One man never spoke a word of the medal, and the other never revealed the truth of his heroic actions. Yet both left clues that 80 years later led their sons to uncover the story of these brothers in arms. 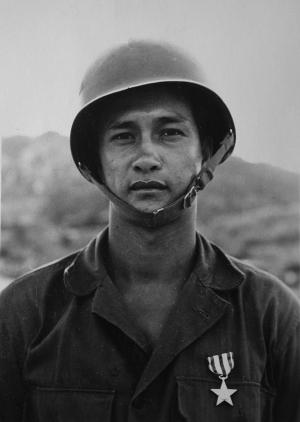 Loren Low was a third-generation Chinese American born in Salem, Oregon, in 1917. His parents were Low Sun Fook and Hong Kay. Loren Low was intimately connected to his family’s past in America. His grandfather Hung Lai Wah went to work on the transcontinental railroad in the 1860s. His grandmother was a rescued child slave, or mui-tsai, in San Francisco’s Chinatown.

The tremendous gender imbalance of Chinese men to women in the 1800s was, in part, caused by anti-Chinese legislation like the Page Act of 1875, which effectively prohibited Chinese women from entering the United States. Subsequent human trafficking of young Chinese women and girls gave rise to a generation of Chinese women rescued from lives of slavery, including Low’s grandmother Tom Ah Ying.

Low’s patriotism was defining. In his own words, he “got his flag a-waving and couldn’t wait to get into the fight.” He enlisted in January 1941, a full 11 months before the attack on Pearl Harbor, and was assigned to the 804th Engineer Aviation Battalion, 7th Army Air Force, based in Honolulu. The engineers’ mission was to accompany invading forces and build airfields throughout the South Pacific. Low took part in the invasion of Baker Island in the Central Pacific, arriving in September 1943, and of Makin Island in the Gilbert Islands, which was invaded in November 1943.

On June 15, 1944, U.S. forces invaded the island of Saipan in the South Pacific. The invasion was preceded by the largest mobilization of U.S. forces in history, with an armada of 535 ships carrying 127,570 military personnel converging on the tiny island located 4,600 miles from Pearl Harbor.

A key objective was to capture Aslito Airfield on the south end of Saipan, putting the Allies with their B-29 Superfortress bombers within reach of Japan. The Japanese were dug in, and over 30,000 Americans, Japanese and civilians died during the invasion.

On the night of June 27, as a platoon of American engineers was working on the Japanese aviation fuel system at the captured airfield, a Japanese bomber attacked what had been their own aviation fuel dump. The mission was to destroy Aslito Airfield. The bombs ignited barrels of aviation fuel and started a huge fire near a 500,000-gallon tank of aviation fuel. The men in Low’s platoon were pinned down by the raging fire and exposed to the enemy overhead.

From his bulldozer, Low sized up the situation and acted. With blade raised, he charged his bulldozer into the conflagration, risking his life to save the men in his platoon and preserve the vital airfield. Walking his “cat” directly into the inferno, Low scooped up earth and coral with the bulldozer blade and smothered the fire as the Japanese bomber circled overhead.

While Low’s assessment of his actions was “no big doings,” the Army Air Forces disagreed and awarded him a Silver Star. Low’s other wartime awards were the Asiatic Pacific Service Medal, American Defense Service Medal and Good Conduct Medal.

Sgt. Low served his country for four years and nine months. He was honorably discharged on Oct. 16, 1945.

In the following years, Low’s recollections of the events on Saipan were of a soldier doing his job. However, he left a tattered article from a 7th Air Force magazine dated Oct. 7, 1944, and headlined “Smothered Death with Bulldozer Treads.” His heroic actions were described in detail. He never showed the article to anyone, but left it as a clue for his family to find after his death on July 25, 2008.

On a photograph accompanying the article, he wrote “Loren Low” with an arrow pointing to the young Chinese American who walked his “cat” into the inferno. 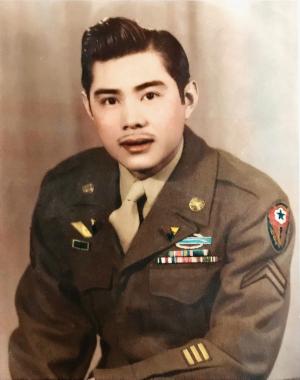 Lui Gain Thyn, also known as Sonny Leo, was born in Taishan in Guangdong Province, China, on Nov. 4, 1925. His parents were Fong Leo and Nagan Tan Lew. Leo’s father and grandfather had traveled to America; the latter worked on the railroads. Leo left China and arrived in San Francisco on July 18, 1938, and later moved to Rock Springs, Wyoming.

Sonny Leo and the entire Leo family were intimately connected to the town of Rock Springs and the anti-Chinese atrocities buried in its past. On Sept. 2, 1885, 28 Chinese miners were murdered by white miners there. Twenty-eight Chinese homes were burned to the ground, resulting in $150,000 worth of property damage, the equivalent of about $4 million today. Most of the Chinese miners at Rock Springs were from the Leo family. Thirteen of the 28 murdered Chinese were Leos, and ultimately, 158 miners from the Leo family claimed losses from the Rock Springs Massacre.

Over a half-century later, Sonny Leo attended Rock Springs Junior High School, completing the seventh grade. He started working at the New Grand Cafe, helping cook Chinese and American dishes during the day and attending a private school for two hours each night for two years.

On Feb. 24, 1944, Leo was drafted into the Army and entered military service at Fort Douglas, Utah. He was assigned to the 20th Armored Infantry Battalion and was involved in battles and campaigns in the Ardennes, the Rhineland and Central Europe.

As a rifleman and assistant squad leader, he supervised 12 soldiers. Leo was familiar with hand grenades, rifles, bayonets and trench knives. His knowledge of camouflage helped conceal his unit from the enemy. He arrived in the European Theater on Jan. 8, 1945, during the Battle of the Bulge. The 20th Armored Infantry Battalion was placed under Combat Command B (CCB) of the 10th Armored Division. 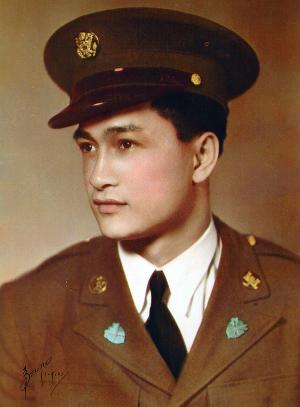 Between December 1944 and early May 1945, CCB traveled 900 kilometers from Bastogne, Belgium, through France, entered Bavaria in southern Germany, and eventually reached the Tyrol region of western Austria. On April 30, the convoy of Sherman tanks, tank-killers, half-tracks and infantry troops was headed south from Moosburg, Germany, toward Lermoos, Austria. Its goal was to cut off the mountain passes through the Alps near Innsbruck, closing the escape route for fleeing Nazis.

On April 30, 1945, at Lermoos, Pvt. Lui Thyn, assistant squad leader, braving intense enemy machine-gun and mortar fire, carried a wounded comrade over 500 yards of exposed terrain to safety. Because of his gallant achievement, he was awarded the Silver Star medal.

Leo became a naturalized U.S. citizen in 1959. He never mentioned the Silver Star to his family. However, for decades he kept a miniaturized copy of the Silver Star citation in his wallet, which, after his death on Dec. 25, 2006, allowed his son Ricky to uncover the truth of his father’s actions.

Loren Low and Sonny Leo never met, but they were cut from the same heroic cloth that had been woven from the decades of struggles of the Chinese in America. In spite of, or perhaps because of, these struggles, these men appreciated the gift of freedom. They were men of honor who, in a time of crisis, instinctively acted selflessly to save their comrades. They were among the best this country had to offer.

They should be remembered not only for their actions in a time of war, but also for the way they lived their lives and raised their families to be American once they returned home from war.

Russell Low is a physician, researcher and author of the historical novel Three Coins: A Young Girl’s Story of Kidnapping, Slavery, and Romance in 19th Century America. He lives in La Jolla, California. Loren Low was his father.

Ricky Leo is an electrical engineer for Teledyne Controls, the aerospace and defense electronics arm of Teledyne Technologies, El Segundo, California. Sonny Leo was his father.