Twenty-first-century warfare will force America’s soldiers into complex environments spanning bustling megacities to the freezing Arctic. They will operate in jungles too thick to penetrate with satellites, and on desert plains too open to hide. Peer belligerents possessing hypersonic and electronic weapons, lasers, artificial intelligence and advanced robotics will threaten to confuse and constrain soldier formations.

Further, multidomain operations will involve electronic warfare, cyber and space in ways that have not been seen in combat before. Army materiel modernization is not sufficient by itself to fight this type of war, which is why when the Army published its 2028 Vision, it focused on exceptional leaders, capable of applying modern lethality gained through the Army’s cross-functional teams on a diverse set of battlefields.

The synthetic training environment (STE) is one of the Army’s eight cross-functional teams. This team has a unique standing within Army modernization because it will connect two domains: leaders to tools. Despite a clear need to advance our materiel technologies and capabilities, it is soldiers and their leaders who will employ STE technology. The synthetic training environment is what connects the materiel solution to the warfighter by bridging technological innovation to exceptional leaders and soldiers who will employ those innovations on the battlefield.

From Novice to Expert

The constant challenge and necessary response between military aggressors demand near-constant change. As technology increases, innovation during times of peace coupled with adaptation during times of war ensure soldiers and leaders must adapt to new forms of warfare and, with that adaptation, they will be forced to relearn their craft within the context of their new environment. In addition, personnel shortfalls, personal biases and changes in the operating environment further drive the Army into a constant state of change.

Change, however, isn’t as simple as merely pointing in the direction of a young leader’s new objective or briefing them with a PowerPoint slide. Translating concepts into action is not an automatic process. It takes time and energy as the brain rapidly tries to process and group new information and determine an appropriate response.

When confronted with new information, a soldier has only two options: route actions through previously established neural pathways, or create new pathways. The former puts the brain at risk of wrongly categorizing what it perceives. The latter takes time and energy.

At its core, transition from novice to expert requires developing neural networks that enable the brain to work more efficiently and accurately. When soldiers are novices, they use a lot of energy as they try to decipher a new experience or task. As they train and learn, they develop a neural network that makes it easier for the brain to recall. The more they train, the more efficient the neural network becomes. Effectively moving from novice to expert is a function that shifts the decision-making activity away from substantial employment of executive functions in the frontal lobes and into memory recall from established expertise networks.

An excellent example of this process is learning to drive. When first learning, a driver’s frontal lobes are fully engaged as they try to figure out how much gas to give, where and when to turn the wheel, how frequently to check the mirrors, gauges, estimated closing distance and so on. Once a driver becomes an expert, the majority of these tasks are processed unconsciously. 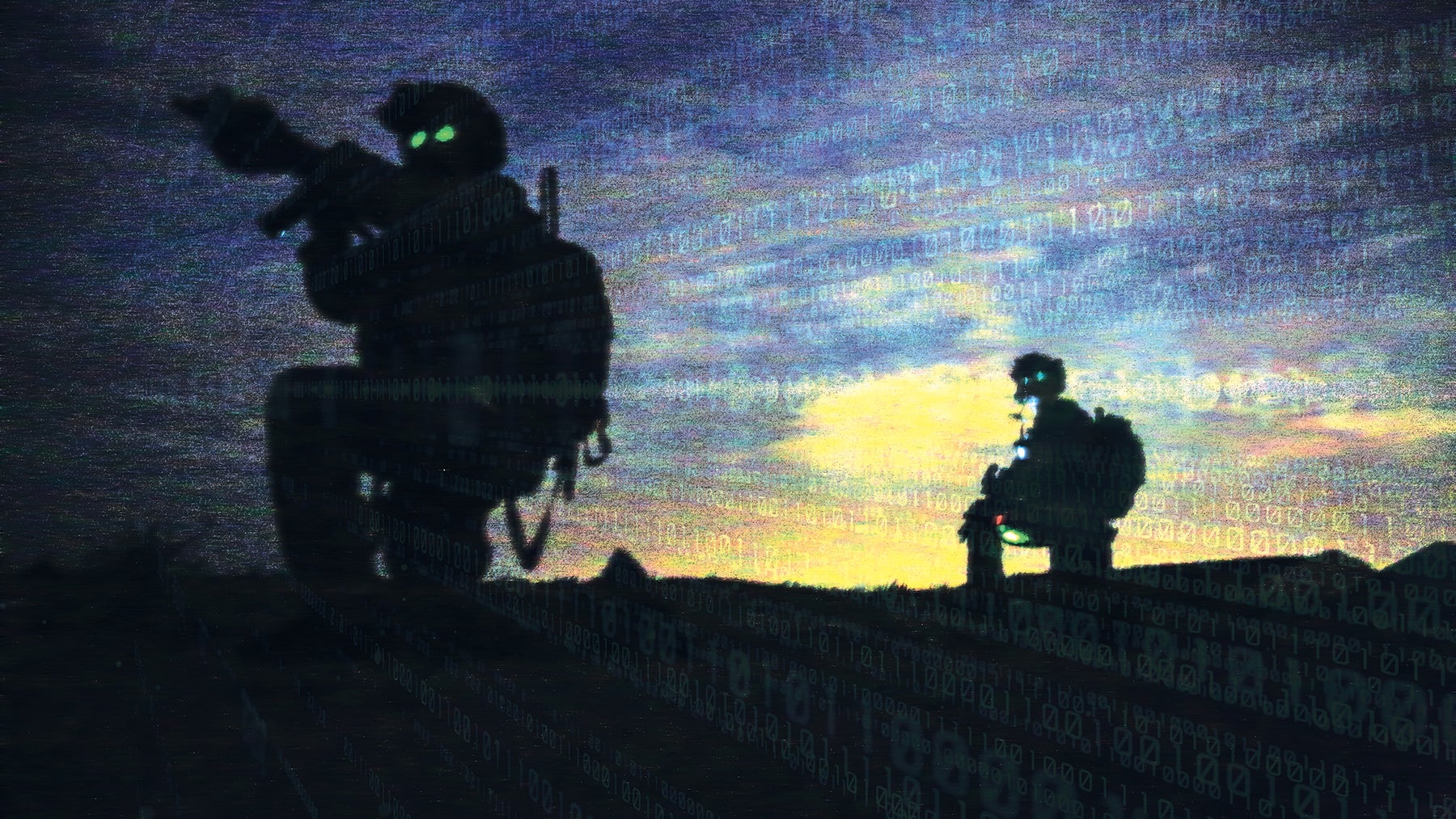 This should be the goal for Army training, and this is how soldiers become experts: repetition that enables soldiers and leaders to develop cognitive/experiential templates, save time and energy during decision-making and develop an instinctive intuition that only experienced warfighters can have.

In short, when recall and decision-making move from a conscious process to an unconscious one, the U.S. Army will see its soldiers outthinking their enemies on the battlefield.

The synthetic training environment is designed to provide a multiechelon training and rehearsal capability for the Army, allowing soldiers and leaders to train dozens of bloodless battles before the first round is ever fired on a real battlefield. To achieve this, the Synthetic Training Environment Cross-Functional Team is committed to modernizing Army simulations by taking advantage of the virtual and gaming industries. Further, the team leverages technologies such as cloud and edge computing, artificial intelligence and machine learning, and human performance tracking and metrics.

To compare the STE to a physical gym is not an understatement. A gym enables soldiers to focus training in a controlled environment. It has equipment and exercises geared to targeting muscular and aerobic capabilities. It provides different levels of stress to activate muscles through various weights and machines. Most importantly, a gym allows the trainer to better measure physical improvement and tailor programs to enhance performance in the needed area.

The STE is the Army’s future cognitive gym. Advances in neurocognitive sciences hold the promise to transform the current learning and training paradigm to a system that can directly target neural network development to achieve and sustain expert-level knowledge, experiential learning and instinctive decision-making. Like a physical gym, the STE will provide a diversity of training capabilities and environments that can be tailored to develop and sustain specific knowledge and cognitive capabilities.

Prior to live training, training within the STE offers the controlled environment necessary to target weaknesses for improvement, leverage strengths for overmatch and build leaders who can thrive in the cognitive ambiguity of the modern battlefield.

Drawing from an understanding of how the brain learns, six recommendations for how to leverage cognitive development within the STE follow:

1 The STE will facilitate multiple repetitions, allowing trainers to accelerate novice neural networks into expert neural networks. To retain this level of expertise, units must continually revisit training. Like a physical gym, the STE offers the ability to do multiple measurable repetitions both for individual and collective training without leaving home station. The STE will inform commanders where they need to focus their efforts based on the effectiveness of their units within the synthetic environment. The STE’s ability to leverage and evaluate myriad performance and training data also will help provide commanders with recommendations on when sustainment training is necessary and how to achieve that training to maximize time and effectiveness.

2 The STE can employ stressful diverse environments and situations that cannot be fully replicated in live training. The STE will not and should not replace live training, but it can produce immersive, complex and realistic environments that increase learning and allow for focused repetition on skills commanders want to train.

3 The STE must serve as an effective precursor to live training. Multiple studies across myriad disciplines prove the effectiveness of simulations to shorten a trainee’s learning curve. The Army has used simulations as gates to live-fire training for years as a way to effectively prepare units to qualify on ranges. The STE takes this concept and expands it to all warfighting functions. This repetition is especially critical for development of commanders and staffs before they move to combat training centers. Following a CTC rotation, the STE will enable units to relive battles to prevent the atrophy that occurs the further units move away from a training event.

4 Training in an STE must target multiple senses for learning. A virtual reality system that not only provides sight and sound but also smell and touch stimulation creates a near-real-life environment that engages and enhances development of expert neural pathways. Using avatars, a trainer can include important micro-expressions, create effects based on those micro-expressions, and enable trainers to evaluate the progress of a soldier’s and squads’ effectiveness.

5 Leaders should encourage use of human sensors to better measure cognitive development. Because STE systems operate in a controlled environment, trainers will be more effective in measuring how well a soldier is learning and adjust training to achieve greater effects.

6 The STE can be mobile and should be considered a mobile cognitive gym. Current simulations are limited to fixed locations and have a high overhead of system and contractor support. While the modern weight room can be containerized and deployed with units overseas, Army legacy simulations have not been as flexible. The STE will change that. Its reconfigurable virtual trainers allow units to conduct collective training on any of their vehicles and are small enough to ship with a unit’s equipment. The STE’s global One World Terrain relies on cloud and edge computing, allowing units to plug in and download relevant environments they will need to train on. Training simulation software will be able to be used on semi-immersive platforms such as tablets and smartphones and will scale to fully immersive virtual and augmented reality systems.

Complex and dynamic future warfare will require leaders who are adaptive and innovative and can think faster and broader than their enemy. Neurocognitive science, human sensors and training technologies advance the promise of a transformational approach to education and training efforts.

The STE is the Army’s vehicle to provide leaders the cognitive dominance to succeed in multidomain operations. While Army modernization is essential to ensuring a technological overmatch on the battlefield, the cognitive overmatch delivered by the STE is what will ensure leaders can appropriately apply their technology and formations to defeat any opponent.