It began as a cheap, off-the-shelf tactic.

Buy a commercially available drone, strap a bomb to it and let it fly.

It didn’t take long for the tactic to catch on, spreading across the battlefields of Iraq and Syria as the Islamic State group tried to hold onto its territory against advancing U.S.-backed Iraqi forces.

The homemade flying bombs were not the terrorists’ most effective tool—truck bombs were still far deadlier—but they achieved their intended purpose and drove the U.S. Army and other services to rush to find effective ways to counter this new threat.

“It’s the first time any military has ever had to look up since the Korean War, especially when the U.S. military’s involved, because we’ve had air superiority,” said retired Maj. John W. Spencer, chair of urban warfare studies with the Modern War Institute at the U.S. Military Academy at West Point, New York.

During the battle to retake Mosul, Iraq, in 2016 and 2017, “drones were part of the everyday threat, and … if you can get into the minds of soldiers and have them think they’re vulnerable from above, you’re effective already,” Spencer said.

The drone attacks, launched individually or in small numbers, represent just the beginning as drones become more prevalent both on the battlefield and in everyday life.

On Sept. 14, a pair of drone and missile attacks targeted the world’s largest oil processing facility in Saudi Arabia and a major oil field, The Associated Press reported. The attacks, which some news reports said consisted of almost two dozen drones, sparked huge fires, disrupted more than 5% of the world’s daily crude oil production, and ratcheted up tensions in the region. 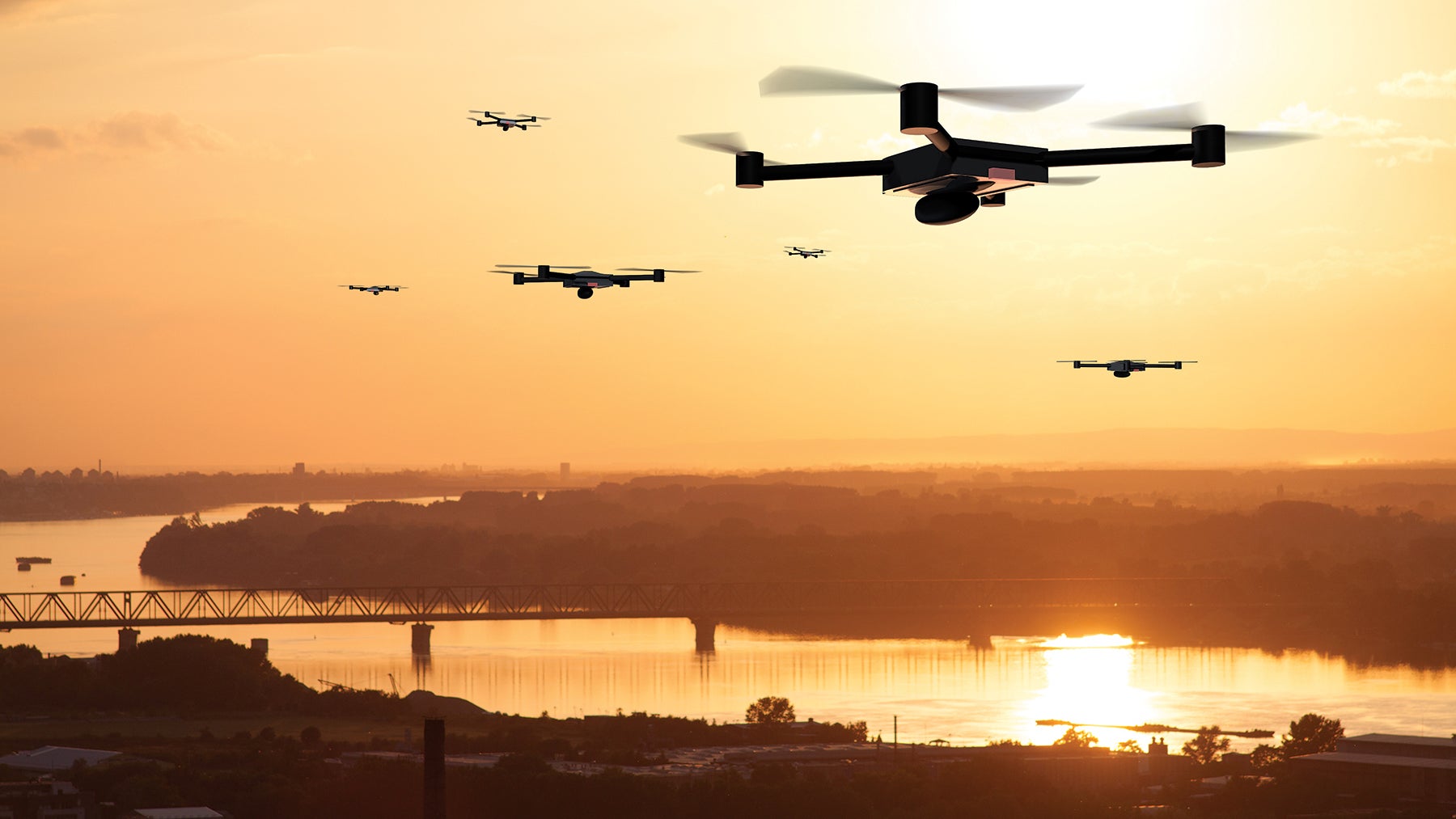 Venezuelan President Nicolas Maduro dodged an apparent assassination attempt, also last fall, when drones armed with explosives detonated while he was speaking to hundreds of soldiers in a speech that was being broadcast live on television, according to AP.

Drones also are seeing rising commercial use. In 2018, more than 1,200 Shooting Star drones by Intel put on a light show to open the 2018 Winter Olympics in Pyeongchang, South Korea. The performance broke a Guinness World Record for the most drones flown simultaneously, according to Intel.

Hundreds of those same drones had a prominent role in Lady Gaga’s Super Bowl halftime show in 2017, while the California State Fair & Food Festival debuted its own drone light show this year.

“We’re in a place today where it’s very easy to purchase small, commercial off-the-shelf drones and weaponize them,” said Paul Scharre, senior fellow and director of the Technology and National Security Program at the Center for a New American Security.

And while these drones, which tend to be cheap and relatively small, don’t pack huge “explosive potential,” they’re “certainly effective against dismounted troops,” Scharre said.

Their use on the battlefield took many by surprise, Spencer added. “The hobby drones really surprised people and kind of caught everybody on their back foot on what to do with it,” he said, prompting efforts to counter this new threat.

What’s coming next are attacks by groups of drones and—farther in the future as the technology develops—swarming drones. Groups of drones, like the 13 that attacked Hemeimeem air base last year, pose a complicated challenge, said Scharre, who wrote Army of None: Autonomous Weapons and the Future of War, a book that examines the role of autonomous weapons on the future battlefield and the legal and ethical issues surrounding their use.

What’s even more complicated are swarming drones, which are drones that cooperate and communicate with one another as they go on the attack. Therpe has been some debate among researchers about how to define a team of drones or a swarm, Scharre said, adding that he defines a swarm as when the drones have a “behavior of cooperation” and can adapt and move together as the mission unfolds.

“We’re not quite at the stage yet where that’s happening in [the] real world in military settings,” he said, “but there’s work in academia and the research world.”

Spencer agreed, saying when it comes to swarming drones, “the software is more important than the hardware,” adding that their eventual use on the battlefield is inevitable. “You’re seeing the start of future war, almost very Terminator, robot-on-robot war that some people believe is the future.”

The challenge for the military will be how to fight against swarming drones, a “very interesting and novel tactical problem” that’s very cutting-edge, Scharre said.

To start, the military has been investing in countermeasures to mitigate drone attacks, which already are “a real problem and have been for a couple of years now,” Scharre said.

The challenge is the military does not have readily available tools to counter drone attacks, Scharre said, adding that the military’s air defense systems, radar or tracking systems are not optimized to track drones.

“Sometimes it can be harder to find a drone,” he said, as they have a smaller signature and can fly closer to the ground. And once it is found, the military must neutralize it in a cost-effective way. In many cases, drones are shot down with surface-to-air missiles—an expensive solution for a cheap problem.

These challenges are driving the military to look for affordable and mobile solutions, from lasers to bullets, Scharre said.

Building a laser or directed energy weapon is expensive, but once it’s built, it’s inexpensive to fire a laser, he said. Bullets are cheap, too, so machine guns may be an effective tool even though there is always a concern about where a bullet that’s fired into the air might land. “In a combat environment, it may be an acceptable risk,” he said.

Jamming devices or high-powered microwaves that can fry a drone’s electronics are also attractive options, especially when dealing with large numbers of drones, he said.

“It’s too early to know exactly what the right solution is going to be,” he said. “It’s going to depend on the threat environment and whatever means you have at your disposal.”

As for when swarming drones might become a reality on the battlefield, Scharre predicted it will happen when more of the technology is incorporated into the civilian sector.

“Cooperative autonomy is something the Army will have to deal with in some time,” he said. “It’s likely to be something we’ll face in the next 10 years from now.”

In January 2017, the Defense Department announced it had successfully demonstrated one of the world’s largest microdrone swarms at China Lake, California, in what the department called “one of the most significant tests of autonomous systems under development by DoD.”

The test, conducted in October 2016, consisted of 103 Perdix drones launched from three F/A-18 Super Hornets. The drones then “demonstrated advanced swarm behaviors such as collective decision-making, adaptive formation flying, and self-healing,” according to DoD.

The demonstration was one of the first examples of the Pentagon using teams of small, inexpensive, autonomous systems to perform missions once achieved only by large, expensive ones.

In this latest experiment, the robots were tasked with locating and isolating a mock city hall building, locating and securing an objective inside, then securing the building.

As the U.S. military continues to work on new ways to target these growing and eventual threats, it—and militaries around the world, including those of China and Russia—is also investing heavily in how it can use drones to its advantage.

Global military spending on robotics and artificial intelligence reached $39.2 billion in 2018 and is projected to hit $60 billion by 2027, according to a March report by the Office of the Deputy Assistant Secretary of the Army (Research and Technology).

Many militaries are “investing in drones just as much as they are artificial intelligence,” Spencer said. “It’s almost like this secondary air force you can build at low cost. It’s scary. … I don’t know if the [U.S. Army] formations of today are prepared for what our competitors are developing.”

Another concern, in addition to how quickly the technology is advancing, is who this technology is available to, from terrorist groups to just about anyone with an internet connection, Spencer said. “They coin it an AI race, but I think there’s a robotics race and drone race as well.”

The Army has been “pretty innovative” in using drones over the past two decades, Scharre said, “in part because there aren’t the same cultural hang-ups as in the other services.”

For example, he said, the Air Force has a lot of “cultural baggage” when it comes to using unmanned aerial vehicles. In the Air Force, it’s important that drones are flown by pilots.

The Army, on the other hand, has been more forward-leaning in incorporating automation in its drones, and it has historically forward-deployed its drone operators. “For the Army, culturally, being boots-on-the-ground is very important,” Scharre said.

The service also is heavily investing in autonomy and artificial intelligence through the U.S. Army Futures Command and its cross-functional teams, Spencer said. “If you look at every one of the CFTs, they want them thinking autonomy, AI, robotics.” He added that the Army also is interested in drone resupply, drone lethality and “how those systems can assist in all the warfighting functions of the future.”

Army aviators have worked extensively to advance manned-unmanned teaming between AH-64 Apache attack helicopters and drones. Soldiers also have been using small, hand-launched drones. Most recently, paratroopers from the 82nd Airborne Division became the first to use the pocket-sized Black Hornet Personal Reconnaissance System in Afghanistan. The Black Hornet, which looks like a miniature helicopter, can fly for up to 25 minutes and provide almost real-time video and imagery of the battlefield.

What the Army needs next is the ability to conduct what Scharre called “autonomous indoor navigation.”

“Right now, the Army drones are being used to maybe look over the next hillside, which has advantages,” he said. “But it’d be really great if we could send a swarm of drones into a building to put eyes on everything in the building, or underground.”

Spencer agreed. “Drone doesn’t just mean a flying drone,” he said. “Drone could be a sea drone, sewer drones, underground drones. You could start to get the element of surprise on the enemy force if you could attack from the sky, from underground and through whatever the urban space is, which is a big challenge for us today.”

The technology is certainly there, Scharre said, and an advancement like that would be a game changer.

“We shouldn’t be sending troops ever, in the future, into a room that we haven’t sent a robot into first,” he said. “That’s a much better approach than having people charge through the fatal funnel.”

As the technology and artificial intelligence continue to move forward, Scharre and Spencer both said they believe there will always be a role for soldiers on the battlefield.

“We have a lot of autonomy already in the different systems soldiers use, but I don’t see soldiers being replaced by any of these systems,” Spencer said.

Soldiers are going to be needed to quarterback any fight, even as autonomous capabilities become more sophisticated, Scharre said. Using AI to play a game of chess or Go is one thing, he said. “But the real world is a lot more complicated. We’re going to want humans involved, making decisions tactically, reacting to the enemy in real time.

To not have that would be a major weakness.”

The Army must capitalize on machines and their capabilities or risk falling behind, Scharre said. “But at the same time, we shouldn’t sell short what humans can do in war,” he said.