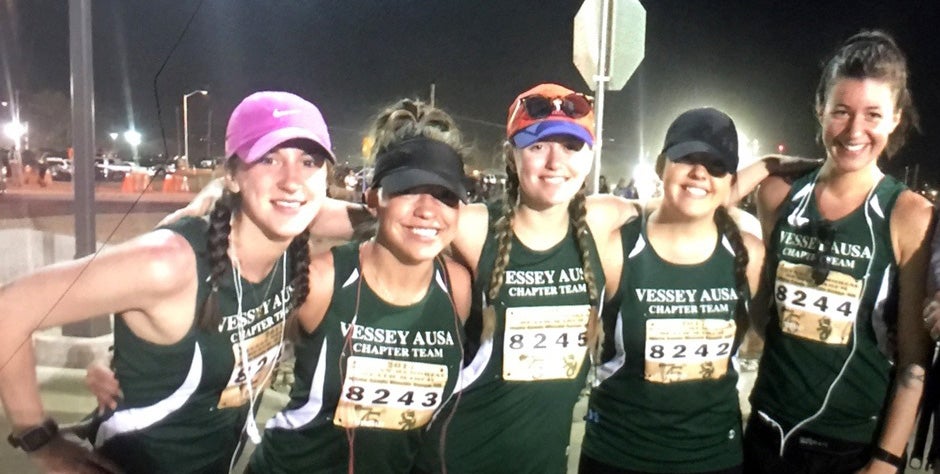 A five-woman team sponsored by the Gen. John W. Vessey Jr. Chapter of the Association of the U.S. Army finished second in their group at the 2017 Bataan Memorial Death March at White Sands Missile Range, N.M.

A team of Staff Sgt. Angela Posch, Cpl. Melissa Aune, Sgt. Emily Powell, Spc. Cheyenne Sybertson and Sgt. Kathryn Rush finished with time of 5 hours, 31 minutes, just slightly behind the winners in the civilian female light team class who had a time of 5 hours and 6 minutes. Teams in the light division do not have to carry the 35-pound pack required in the heavy division of the marathon.

Posch, age 30, is from Stillwater. Aune, 24, is from Motley. Powell, 27, is from Eagan. Syvertson, 21, is from Minneapolis. Rush, 28, is from Little Falls. The five women sponsored by AUSA’s Minnesota chapter are all affiliated with the Minnesota National Guard. In 2016, the Vessey Chapter team that included four of this year’s runners finished first in their grouping.

The 2017 marathon commemorated the 75th anniversary of the World War II atrocity in which American and Filipino prisoners of war were forced by the Imperial Japanese Army to march more than 60 miles with little food or water. More than 500 Americans and 5,000 Filipinos died on the march, although some reports put the death toll far higher.

This was the 28th year for the New Mexico memorial marathon. The 2017 event attracted what the Las Cruces Sun-News reported was a record crowd of about 7,200 participants. There are two courses: a 26.2 mile marathon and a shorter 14.2 mile track mostly on pavement.

Eight survivors of the 1942 death march were at the 2017 marathon, the newspaper reported. The oldest was retired Army Col. Ben Skardon. The 99-year-old who walked about 8 ½ miles of the course, his ninth consecutive year to complete that distance.