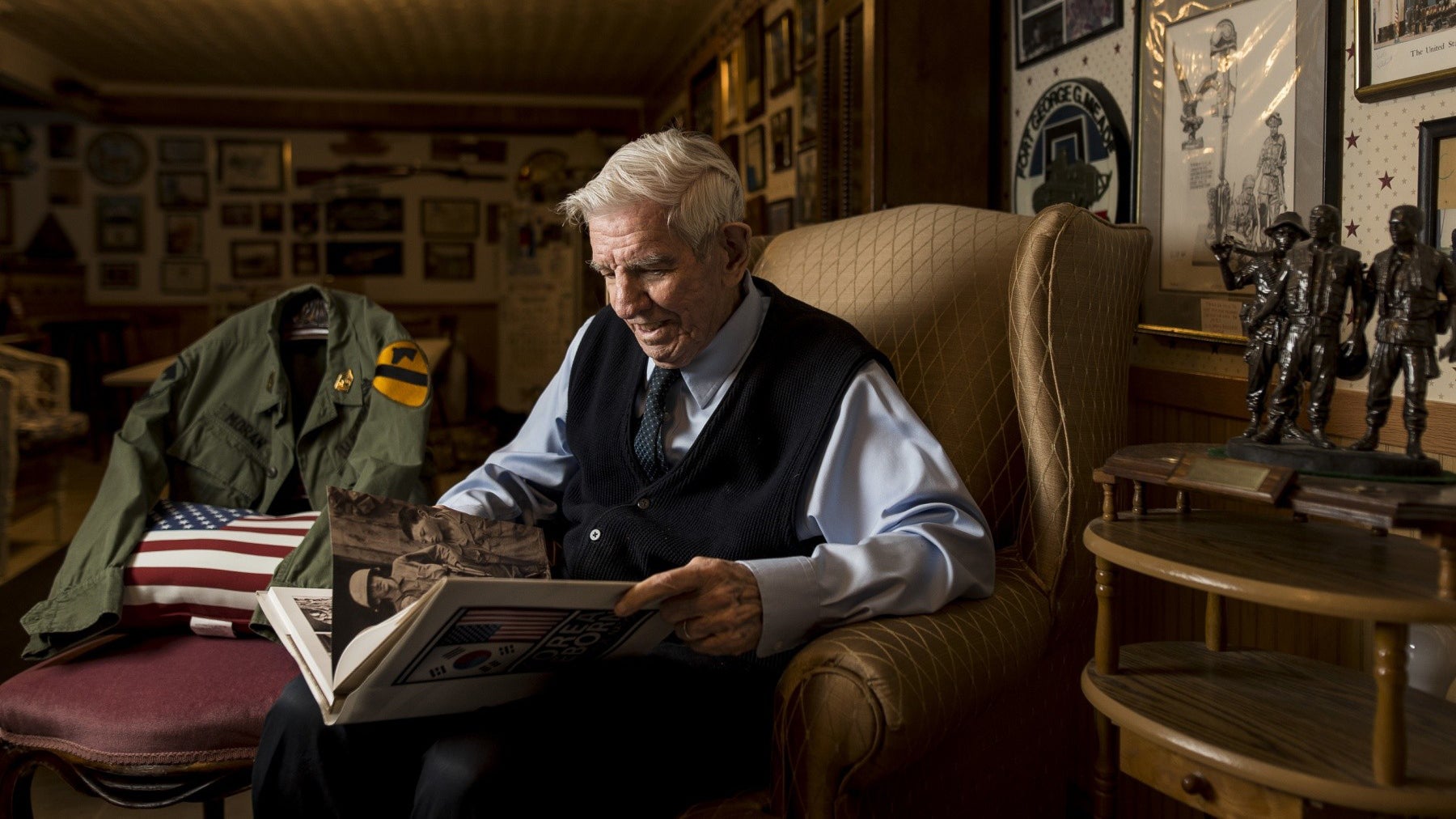 Retired Sgt. Maj. Raymond Moran, a longtime member of the Association of the U.S. Army affectionately known as the “Old Soldier,” was laid to rest March 9 at Arlington National Cemetery in Virginia.

The 2001 recipient of AUSA’s Sergeant Major of the Army William G. Bainbridge Medal for his contributions to the NCO corps, Moran served the Army in both peace and war for more than half a century, according to his obituary.

A combat veteran of the Korean and Vietnam wars and an Army recruiting icon, Moran died Nov. 3 at the age of 90. He was a Life Member of AUSA.

Moran enlisted in the Army in September 1948 and began his career with the 101st Airborne Division at Camp Breckenridge, Kentucky. In 1950, he was assigned to the 1st Cavalry Division in Japan, serving with Gen. Douglas MacArthur’s personal guard, according to his obituary.

He would go on to serve in Korea, fighting in the Pusan Perimeter and the counter-offensive into North Korea to the Yalu River and earning the Combat Infantryman Badge and Bronze Star Medal.

After returning from Korea, Moran became an Army recruiter in Washington, Pennsylvania, where he met his future wife, Barbara, and discovered a love for recruiting. Moran spent the next 12 years rising through the recruiting ranks, serving in Pittsburgh and Germany before becoming the first sergeant and then sergeant major of the recruiting battalion in Boston.

Beginning in 1969, Moran served two tours with the 1st Cavalry Division in Vietnam and Cambodia, earning a second Bronze Star, the Purple Heart, the Air Medal, the Vietnam Cross of Gallantry and the Vietnam Armed Forces Honor Medal 1st Class, according to his obituary.

When he came home, Moran became the operations sergeant major for Army Recruiting Command and played a pivotal role as the Army transitioned into an all-volunteer force.

He retired in 1978 after 30 years of service and became a civilian recruiter with the recruiting brigade in Baltimore, according to his obituary.

In 1991, during Operation Desert Storm, Moran volunteered to return to active duty.

Moran, then 61, had been retired for 21 years, but he convinced the Army to allow him back on duty in uniform, according to a 2018 Army news story.

“The age cutoff was 63, and he was just a few months shy,” his son, Ray, said in the story. “He volunteered again later at age 74 when Operation Iraqi Freedom kicked off. The Army sent him a very nice, ‘Thanks, but not this time,’ letter.”

He served for 18 months as a casualty assistance sergeant major supporting the families of fallen soldiers. One of his most difficult tasks was taking wedding rings off the bodies of soldiers after a scud missile attack killed 13 from an Army Reserve unit in Greensburg, Pennsylvania, which was about 10 miles from hometown of Latrobe. He had recruited soldiers into the unit.

After completing his Desert Storm service, Moran returned to his work as a full-time civilian Army Reserve recruiter until the Army ended the civilian recruiter program in 2012, according to his obituary.

To honor his contributions to the Army, Moran Street on Fort Meade, Maryland, is named after him, as is the Army Recruiting Command and Retention Hall of Fame. The command also presented him with a Lifetime Service Award in 2017, according to the Army news story.

“I loved it. Enjoyed every minute of it,” Moran said in the news story as he recounted his career. “Never complained at all any time that I served in uniform. It was just an honor for me to serve.”

Moran and Barbara, his wife of 67 years, were laid to rest together at Arlington National Cemetery.