Striking the Right Balance With Soldiering

Striking the Right Balance With Soldiering

U.S. Army soldiers have masterfully executed a delicate balance of looking ahead to the next challenge while also preserving Army history and honoring those before them who have sacrificed and served.

Noncommissioned officers built their organizations on a foundation of lineage and tradition. Each recruit and new member of a unit is indoctrinated with unit history and learns quickly what it means to be a soldier. We regularly test each other’s knowledge and skills, and we never forget about those who were lost on the battlefield. We cherish our history and take pride in it.

However, it is absolutely essential to our way of life and Army culture that we not allow soldiers and leaders to compromise tomorrow’s fight. NCOs must find that right balance and strive to remain current and relevant globally.

President John F. Kennedy once said, “Change is the law of life. And those who look only to the past or present are certain to miss the future.” This is as true now as it was during the Allied invasion of Normandy, France, or any other conflict in which our nation’s military has taken part. In our case, missing the future could be detrimental to our national interests and security.

Soldiers today accept this responsibility. They manage to absorb doctrine, establish procedures, and execute in highly complex environments with amazing success. It’s remarkable how soldiers navigate between what I observe as the Army of today and the Army of tomorrow. We don’t know what the fight may be, but we will no doubt be ready for it.

Do we cling to tradition or push to modernize? Do we do what we know works, or do we innovate? Is the reward worth any or all of the risks? Is the challenge something we want to take on right now? As we carry out our daily missions and tasks, these are the tough decisions that we, as soldiers and leaders, often face.

The answers may never be clear. One aspect or another may suffer, or a detail might be overlooked. As the saying goes, hindsight is almost always 20/20. We must maintain a solid balance among our experiences, the foundation for which we have established as soldiers and what we think the future requires from our force.

Our proficiency will always depend on how well we master the basics. If we cannot execute simple tasks, we certainly will falter with the tough ones. The ability to apply basic doctrine allows us to always be ready to think outside of the norm and operate outside of what is familiar and routine. We train to standards, but we execute well beyond the minimum standards.

Recall how often Army artillery soldiers have fired their big guns since 9/11. Compare that to how many raids or dismounted patrols have been conducted by soldiers branched as field artillery. How many food service specialists or mechanics in recent years have filled fighting positions or led convoys in combat? 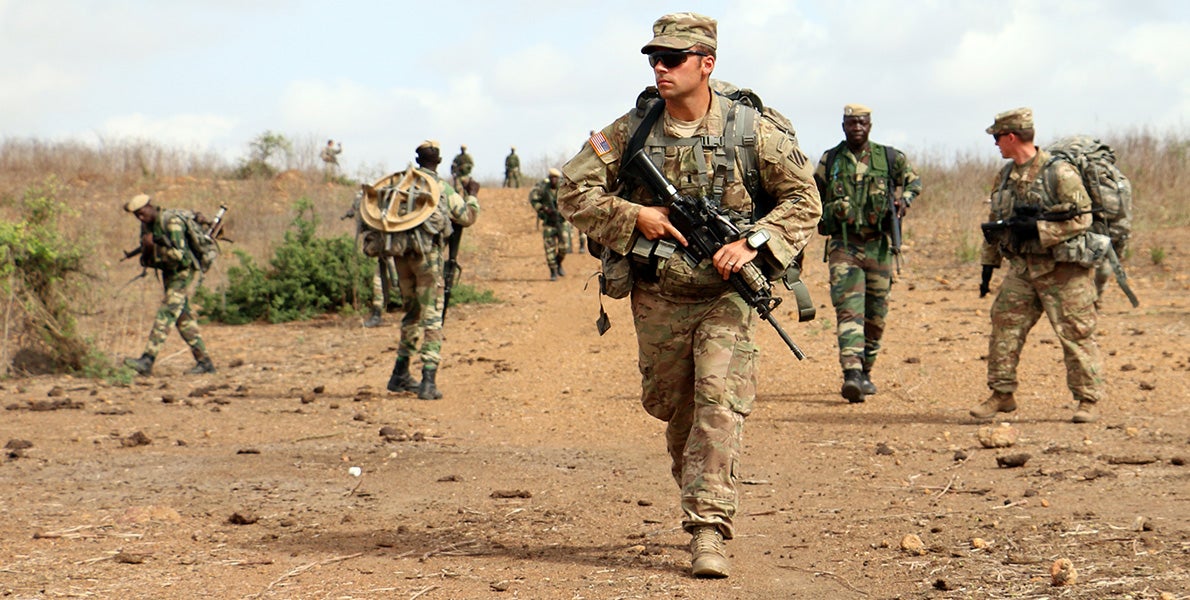 At least two female soldiers have earned the Silver Star since 9/11. Countless others have earned Bronze Stars and Army Commendation Medals for valor. Each of these is an excellent example of the type of adaptable, well-trained and ready soldiers leading the way throughout our active-duty Army, National Guard and Reserve formations.

I would argue that today’s soldiers are challenged and pushed to be innovative more than any other generation of Americans who have worn the uniform. The future operating environment continues to be more complex and uncertain than we’ve ever known. If the past 15-plus years have taught us anything, it’s that we must be adaptable, ready, and well-trained in our basic fundamentals and core competencies. We must also have the integrity and character to execute difficult tasks.

Likewise, there is more pressure now than ever before to get it right. Our margin for error is shrinking with our end strength, yet our overseas commitments continue to grow. More specifically, the demand from the combatant commands to conduct full-spectrum operations has increased. Still, our soldiers are prepared to fight in air, on land, at sea and in cyber domains in order to take on increasingly dangerous threats to national security. If anyone is capable of meeting these challenges, it’s the U.S. Army soldier.

As of today, the Army has more than 180,000 soldiers deployed supporting combatant commands in over 140 countries. Our Army is responsible for supporting 46 percent, nearly half of the requirements DoD has directed to those commands. That means half of the missions around the world that require military support are being covered by the Army. Many of those soldiers are in harm’s way. Others are strengthening relations through training and military-to-military partnerships.

It’s certainly not uncommon for a 20-something-year-old staff sergeant to lead a squad against enemy actions in Afghanistan while elsewhere, another young NCO is the primary trainer on a particular weapons system for a developing military in South America. Again, our soldiers are extremely adaptable, intelligent and capable. It’s something they’ve proven repeatedly in a variety of missions and environments.

Our missions will continue to change because we know that our world is a complex place that requires an Army that is able to adapt to the unknown. Remaining relevant and current can mean a lot of different things. For soldiers, we must be trained not only to fight and win, but also to make a difference and work with our State Department and civilian counterparts.

Every single soldier must be able to deploy. Our ability to take the fight to our enemies and answer the nation’s call depends on individual and unit readiness. Soldiers exist to fight and win the nation’s wars when asked to do so; that is something that is not going to change.

Another balancing act we attempt is managing today’s fight while looking for ways to make our soldiers successful after service. This is critically important to our mission for several reasons. Happy and successful veterans are advocates who educate Americans with their experience. We want veterans to share their stories and lend real substance and experience to future recruits. More than anything, however, we want to take care of those who have served, ensuring they have the tools to succeed in their communities long after their service.

Through Army University, expanding our fellowship program, and working with national credentialing agencies to certify our MOSs, we are changing the paradigm of how we groom our enlisted force. We’ve already reduced retention control points in our attempt to “right-size” our force and allow upward mobility through the ranks.

As a result, nearly 1,000 master sergeants and first sergeants were selected for the fiscal year 2016 Sergeants Major Academy select and train list, which was released in December. The selection rate was 28.4 percent, and nearly 400 more were selected than in the previous year.

This will have a positive effect on the subsequent selection boards for sergeant first class, master sergeant and sergeant major. We expect the trend to continue for several years until the growth stabilizes.

This was a risk, of course, but it is about making decisions from an enterprise perspective, and we’re talking 10, 15 and 20 years from now. We may save that future sergeant major of the Army from making a decision as a sergeant to leave.

We are investing in soldiers from privates to command sergeants major. Just like any other military training, education must be a continuing effort. We want to give soldiers skills to enhance their strength on the battlefield as well as in the job market back home. This is the real legacy of the Soldier for Life program. It’s not a bumper sticker saying; it’s tangible, and real.

Ultimately, we cannot predict where the next conflict is going to take us and what will be asked of our soldiers. What I’ve learned overseeing today’s force, however, is that a great deal can be accomplished with discipline and adaptability. Our soldiers—one conflict after another, throughout history—have succeeded because of their character. Today’s soldiers are no different, and they most certainly will instill the same values in tomorrow’s Army.