The Army is “healthier today” than it was a year ago and will continue to benefit from strong forward momentum, Army Chief of Staff Gen. Mark A. Milley says. That is, as long as readiness remains a priority, funding is steady and the effort to modernize the service as planned is given the opportunity to take hold.

The Army “has very good momentum right now,” Milley said. He predicted that with reliable funding and an international environment that “stays as it is,” the Army will be “in a much healthier place a year from now than it is today, as we are healthier today than we were a year ago.” 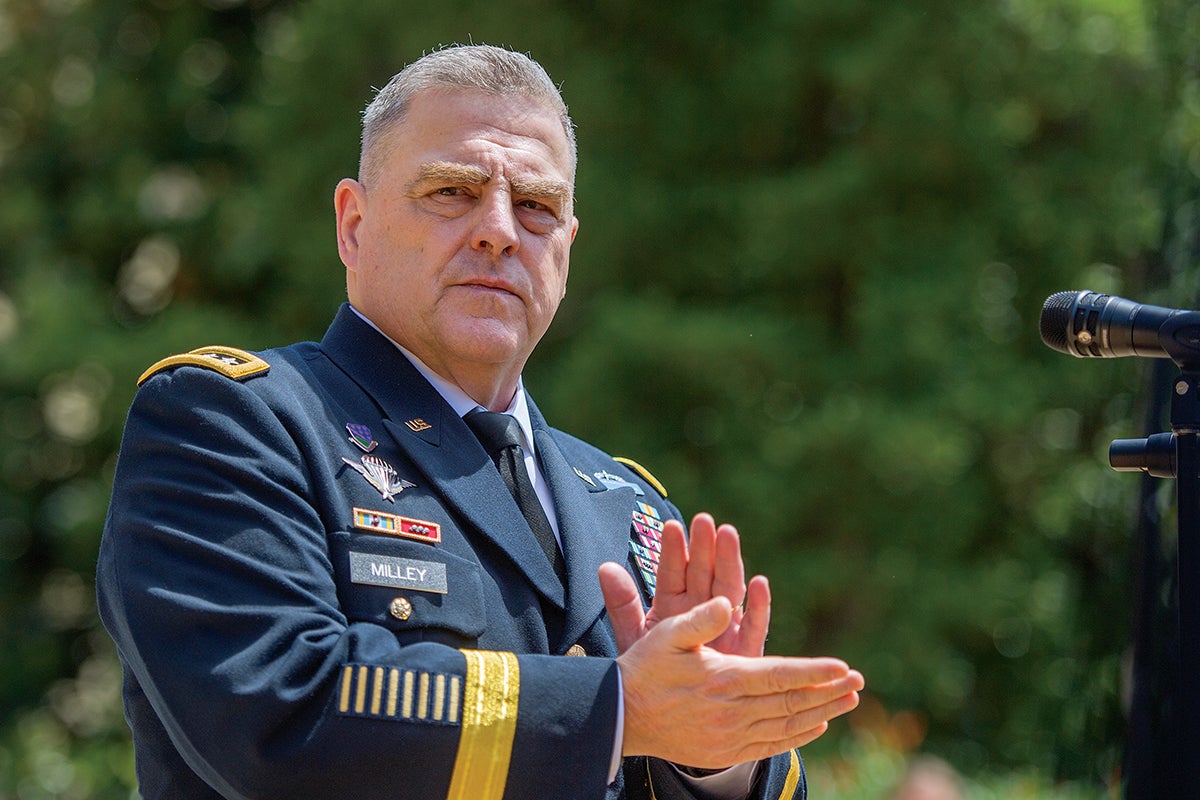 Following a year at the helm of the U.S. Army Forces Command, Milley took over as chief in 2015 at a time when the Army faced the cumulative effects of “negative downward pressure” he said were brought on by declining end strength, unreliable funding, a force under stress and equipment battered by more than 14 years of war.

The majority of service members killed or wounded since 9/11 have been soldiers, Milley said, asserting “that in and of itself creates a certain high degree of stress, not only on the force, but also on the families.”

As he worked with his predecessor and a transition team in preparation to become chief of staff, readiness popped up quickly as the issue most critically in need of attention. “There were two brigades at the highest level of readiness in the entire Army,” he recalled. He said that now, “the trend lines are in the opposite direction for the good.” He cited a reversal in fortune with more predictable funding and the authorization to grow the Army’s end strength, which is “having a positive effect on a host of activities, not the least of which is the readiness levels of the units.”

The urgent need to increase readiness was followed closely by the need to overhaul the Army’s arsenal of capable but aging ground, air and fires capabilities. Milley concluded it couldn’t all be done at once, so he focused his first two years on readiness. By August, when he hits the four-year mark as chief, he predicts the effects of his modernization efforts will be underway.

“We are on a ‘rise over run’ improving our readiness and our lethality and then we’ll be well situated to modernize,” Milley said. The effects of initiatives to reform and modernize the Army won’t be visible by the time he retires, Milley said, because those effects take years to play out. “But we will be set to achieve those effects, and that was my goal: to make sure that the institution was reorganized and positioned to effectively modernize the Army over the next 10 to 15 years.”

Confident that the Army’s top priorities are headed in the right direction, Milley asserted that the 66 percent readiness goal he set for the Regular Army is achievable across all unit types.

“Sixty-six percent is our mark on the wall. That’s where we’re marching to and given current trend lines and if all other variables stay steady, we should achieve that at our current pace,” Milley said. He projected the readiness goal for the Regular Army will be reached in roughly four years, and a 33 percent readiness goal for the Army National Guard and U.S. Army Reserve can be achieved in about two years.

His projection is based not only on the expected increase in manpower, but on the tectonic shift in the way the Army trains.

During more than a decade and a half of fighting a counterinsurgency, Milley noted, younger officers and NCOs weren’t required to develop their own training plans, the kind needed for effective home-station training. He described their only experience as one of getting onto a conveyor belt to Iraq and Afghanistan, coming back, refitting, being trained by others in a mission rehearsal exercise, then going back downrange to do it all over again. “It was a very quick operational tempo pace; there wasn’t any time for high-quality training by the unit’s own leaders,” he said.

The silver lining was the emergence of a generation of strong, small-unit tactical leaders who have experienced combat. But it also meant a lieutenant who was commissioned in 2001 and getting ready to go into battalion command knew only a single type of war: counterinsurgency.

Adding to the uptick in unit readiness is the strong interoperability with the Army National Guard and Army Reserve, two components that provide more than half the logistics and specialty capabilities the Regular Army depends on to go to war.

The higher rate of equipment usage for more-demanding exercises is also reinvigorating industry’s production of spare parts, which Milley said “lagged for years.”

And because of the slowdown in overseas rotations, units have more time to focus on fundamental tasks at home station.

As an example, Milley said when he took over in 2015, few armor battalions had done Table 12, the highest gunnery table an armor battalion can execute. Likewise, artillery units hadn’t been able to execute Table 18, the highest level of collective training in which battalions and batteries fire complex target arrays.

During the churn of rotations to Iraq and Afghanistan, he said, “they wouldn’t have had the time, but there wasn’t also the need because we were fighting terrorists and guerillas.”

Concurrent with his push for greater readiness, Milley undertook the biggest organizational change the Army has seen in decades, and over the summer shepherded the launch of the U.S. Army Futures Command.

Slated to be led by a four-star general, Futures Command is the result of more than two years’ worth of analysis of needed reforms and resources, and an in-depth study of the future operating environment. Informed heavily by Defense Secretary Jim Mattis’ National Defense Strategy, Milley’s team looked at the gaps between the U.S. and its near-peer adversaries, namely Russia and China, and came up with a list of six immediate priorities that are the first focus of Futures Command.

Organizationally, Futures Command is still in its infancy. But work has been underway for more than a year by six cross-functional teams charged with busting through bureaucracy and accelerating procurement to field needed equipment more quickly now and in the future.

Calling Futures Command “a major effort, the biggest restructuring of the Army in 34 years,” Milley estimated it will take six to 12 months to get the command up and running.

“That takes you to the summer of 2019 and whoever the next chief is has got to continue to follow through with all this momentum. Modernization has got to be followed through. If it’s not followed through then it will be all for nothing.”

A devoted student of history, Milley’s vision for preparing the Army for future warfare is grounded in understanding how the Army has fought small and large wars over time.

“You’re never going to be able to walk away from the American way of war because we’re Americans,” he said, highlighting the Army’s historic and exceptional use of fires, mobility, logistics, protection and ground maneuver.

“Our Army is built, organized and designed to accentuate those advantages. We’ve also had exceptional ability to conduct Mission Command, to communicate, to deal with the unexpected and to adapt.”

But the focus on future capabilities doesn’t mean other needs won’t get funded, Milley explained.

It just means that in the procurement and modernization portion of the Army’s budget pie, those are the things Army leaders are putting their money on.

“There’s no way that on one chief’s watch you’re going to modernize the Army,” he said. “But you set it up on the footing to do that, and that was my plan, that was my objective, and I feel very good about being able to do that.”