Standards enable the Army to function efficiently and ethically by creating shared expectations among soldiers, which is why Army leaders are charged with establishing, embodying and enforcing standards.

In high-performing units, leaders vigilantly enforce established standards. However, in units where explicitly stated standards are not enforced, a lower standard implicitly takes hold. After all, the true measure of any standard is its enforcement.

When leaders proclaim one standard but their units practice a different standard, shared understanding breaks down. Soldiers do not know which standard to follow; subordinate leaders do not know which standard to enforce. Moreover, a unit’s failure to enforce one of its stated standards undermines the authority of all its standards, as soldiers no longer trust their leaders’ words and instead wait to observe their deeds. The resulting uncertainty about standards is especially dangerous in the profession of arms, where adherence to ethical standards is the firewall between justified and unjustified violence. 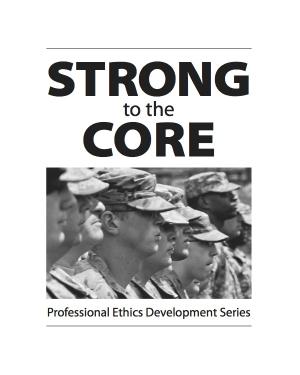 Unreasonable standards and limited resources are among the factors that impact adherence to published standards in Army units. For example, Army safety standards require soldiers to have their privately owned vehicles inspected by their chain of command and to complete online training before departing on personal leave. These are the same soldiers the Army trusts to drive multimillion-dollar government vehicles across treacherous terrain in limited visibility while being shot at. Making matters worse, units often do not allocate sufficient time for soldiers to accomplish these demeaning tasks in the hectic days before taking leave. Consequently, soldiers and subordinate leaders not infrequently “pencil whip” the pages of required documentation, violating their most basic ethical duty to be truthful.

I witnessed a similar phenomenon occur in a deployed unit during the Afghanistan Surge in 2009.

Leaders there were aware that falsifying documents violates a fundamental ethical standard. They felt justified in doing so, however, because their mission was to rapidly build the fighting capacity of the Afghan National Security Forces, which required them to literally build combat outposts for the Afghans. However, the only funding available had been allocated for other purposes. In military jargon, the money was “the wrong color.” So to accomplish their mission, leaders routinely signed documents stating the funds would be used to purchase firewood, which was permitted, when in fact the funds were used to purchase concrete and other materials to build fortifications.

The leaders understood the justification for their actions. “You gotta do what you gotta do to accomplish the mission,” one captain said. “You cannot allow the bureaucracy to cause mission failure.”

Remarkably, though, the leaders did not speak with one another or their chain of command about what they were doing. The routine falsification of purchase orders was an open secret. To borrow a phrase, they adopted a “don’t ask, don’t tell” approach to their violation of an important ethical standard.

The classroom solution to their predicament seems obvious. The leaders should not have falsified any documents. Instead, they should have reported the problem up the chain of command until someone with appropriate authority either provided them the right color funds or authorized them an exception to use the wrong color funds to purchase fortifications.

The leaders unanimously rejected the schoolhouse solution. They reasoned that their mission demanded immediate execution, so they didn’t have time to wait for higher headquarters to receive, understand and address their problem. They also feared that even if their request were heard sympathetically, it would still be rejected on legal grounds by those who felt no responsibility for their mission. Were that to happen, they would lose all freedom of ethical maneuver and be left unable to purchase the supplies they needed for their mission. Even worse, their efforts to address the problem aboveboard would likely draw high-level attention to their dilemma, inviting an audit of their previous purchases.

“Don’t ask a question unless you’re willing to accept the answer,” one leader said. “Sometimes, it’s better to let a sleeping dog lie,” said another.

I did not observe a decline in other ethical standards in that unit, perhaps because the unspoken practice of falsifying documents was mission-focused and widely recognized as a necessary exception. Still, the unwillingness of senior commanders to take ownership of the situation by explicitly authorizing the new standard imposed significant risk on their subordinate leaders. One captain conceded, “If we ever get audited, I’ll be screwed.”

Not all units can keep their justified unspoken exceptions to ethical standards from spiraling out of control. During the Iraq Surge in 2007, for example, a second lieutenant who had joined his unit mid-tour three weeks earlier mentioned to me a “platoon detention cell.” I asked how he could have a platoon detention cell when regulations permitted no detention areas below the brigade level, and even the brigade holding area could hold detainees for only 48 hours before turning them over to the Iraqi government. He explained to me what his platoon’s NCOs had explained to him upon his arrival at the platoon’s combat outpost—that the standards he’d been taught at Fort Benning, Ga., did not apply in Iraq. The inexperienced leader provided examples of unofficial differences in tactical standards, uniform standards and minor ethical standards to buttress his point. “Besides,” he said, “everyone is doing it.”

Isolated from peers and his commander, intimidated by his experienced subordinate leaders and unsure of which standards had been implicitly adjusted on that combat deployment, the lieutenant was failing in his duty to enforce a significant ethical standard.

When I informed him I had not seen or heard any indication that any other platoon in Iraq had its own detention cell—including the other platoons in his company—he became concerned and immediately resolved to correct the situation. Unfortunately, it’s likely the platoon’s illicit detention cell already had produced significant harm to Iraqis, to the American soldiers involved and to the allied coalition’s war effort.

War sometimes creates situations in which it is appropriate and justified for soldiers to adjust existing ethical standards. When these situations occur, however, it is imperative that leaders explicitly acknowledge the changes and explain the new standards to their soldiers. When leaders permit the changes to occur simply by implicit agreement, their soldiers are likely to become uncertain about which ethical standards are still in force.

Ethical ambiguity leads to ethical confusion, and ethical confusion sets conditions in which there is greater risk that unethical behavior will spin out of control. That is unfair to soldiers and dangerous for everyone involved.

Leaders can foster ethical climates by encouraging their soldiers to identify and bring to their attention any gaps between stated standards and enforced standards. Leaders and their soldiers should discuss any gaps as professionals to make a good determination about which standard—the stated one or the practiced and enforced one—ought to be adjusted.

Leaders should never abdicate their duty to explicitly state and take responsibility for their units’ actual standards—particularly when changes are needed—because soldiers deserve to know unequivocally what is expected of them, especially ethically. Soldiers have volunteered to fight, kill and even die for what is right, so they deserve to know with certainty what is right.