Abolitionist, dress reformer and suffragette, Mary Edwards Walker first strode onto a battlefield with her surgeon’s bag in 1862. She was a civilian volunteer who had been denied official Union Army enlistment again and again. But three years later, she became the only woman ever awarded the Medal of Honor.

She self-funded a medical school education. She was captured by Confederate soldiers after crossing enemy lines to treat wounded civilians, only to later be arrested as a spy.

She spent four months as a prisoner of war, performed countless field surgeries, and was frequently arrested for “impersonating a man” due to her lifelong rejection of skirts and corsets.

As Lt. Col. Nicolas Britto, president of the West/Central Alabama Chapter of the Association of the U.S. Army, learned more about Walker’s life, he realized she was the perfect lens through which to view the chapter’s 2018 Outstanding Women of the Year.

Britto planned the organization’s awards luncheon, held in a packed Tuscaloosa River Market and catered by The Pottery Grill on Feb. 28, around reintroducing Walker’s historic achievements to modern audiences.

“She is an inspiration to all women in our country,” Britto said, noting that while thousands of men had earned Medals of Honor, Walker was still the only woman so recognized.

“Her life and efforts to improve the equal rights of women should never be forgotten,” he said.

Her struggle for recognition is still fought by women leaders, as the story of one Outstanding Woman of the Year, the event’s guest of honor, demonstrates. 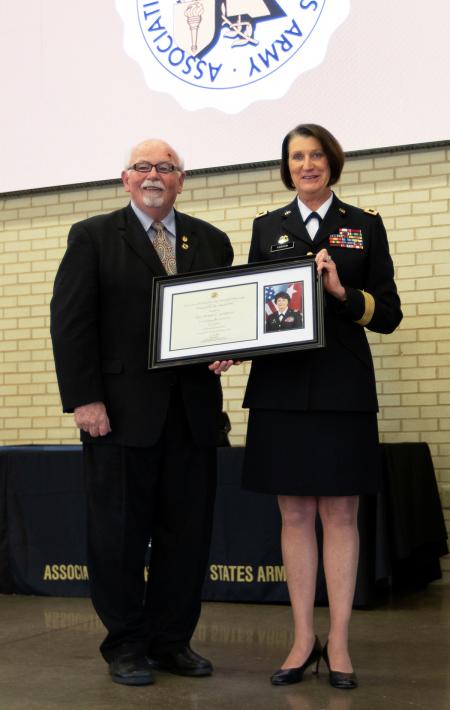 But the wait for recognition is not new in women’s history. Mary Walker’s wait didn’t end in her own lifetime.

She became a doctor in an era when few women earned advanced degrees, and her earliest practice failed in part because few people at the time trusted female doctors.

She was a strong advocate of women’s rights, refused to repeat the word “obey” in her wedding vows, and kept her own last name after marriage.

She strongly believed the long dresses and numerous underpinnings women of the era were expected to wear were unfairly binding and even unhygienic, and so she stubbornly insisted on wearing pants in public despite the frequent harassment she faced for doing so.

At the start of the Civil War, Walker served as a volunteer surgeon for the Union Army and was reportedly much appreciated by both wounded soldiers and fellow doctors.

She was hired at the pay level of a lieutenant in 1863 and captured by the South when she crossed enemy lines to treat wounded civilians in 1864.

After four months as a prisoner of war and a brief excursion to report her experience to President Abraham Lincoln, she returned to the field ready to serve again.

But decades after she earned her Medal of Honor, it was revoked in a sweeping 1917 readjustment that erased more than 900 honorees from the rolls.

Walker, however, believed it was her work across enemy lines that had earned her the medal, and she continued to wear it throughout her life.

Only in the 1970s, more than 50 years after her death, was the honor officially reinstated.

“It is women like Dr. Walker who inspire us to do better and to be better,” Gordon told award winners, event sponsors and Hillcrest High School JROTC cadets who had helped organize the program in Walker’s honor.

“She engulfed herself in her desire to help others, working for free for the Union Army as a medical doctor, because she knew well the importance of women in the military.”

Gordon herself grew up in a military family, surrounded by the seven Army Values of loyalty, duty, respect, selfless service, honor, integrity and personal courage.

She also completed advanced level military studies courses, and earned decorations and awards including the Distinguished Service Medal, Legion of Merit and the Meritorious Service Medal.

But she feels she worked her way up from second lieutenant and administration officer to liaison officer to assistant adjutant general-Army and, finally, to adjutant general of Alabama under greater scrutiny than a man would have had. She said it’s part of being a woman in leadership, in any field.

“We feel like we must be better, and we must do better, than our male predecessors,” she said in her remarks. “Otherwise, we’re just playing into the archaic stereotypes of women being the lesser of the sexes. We have to demonstrate to whatever organization we’re involved in that we are more knowledgeable and fit to lead than our male counterparts.”

Hillcrest High School senior and JROTC Cadet Battalion Commander Caitlyn Lewis, who helped organize the luncheon and introduced Gordon to the audience, said Gordon and Walker show her that women have something real to offer the military.

“Women may be less in number” in the military, she explained, “but we are equally as strong.”

As the state of Alabama’s adjutant general, Gordon is a visible reminder of that strength for female cadets like Lewis.

She said she hopes young women see her success as a realistic goal for themselves.

“When Governor Kay Ivey chose me to lead the more than 12,000 members of the Alabama National Guard, I was truly humbled,” she told the crowd. “She called me a trailblazer and said, ‘Sometimes, the best man for the job is a woman,’ and I think she probably knows a little bit about that.”

Along with Gordon, the AUSA Outstanding Women of the Year are Wendy Harris, PARA division manager and local sports historian; Jennifer H. Henderson, U.S. bankruptcy judge for the Northern District of Alabama, Western Division; and Dr. Cathy Randall, chair of the board of Pettus Randall Holdings, LLC, and former chair of the board of Randall Publishing Company.

The 2018 Veteran of the Year, Dorian M. Jenkins, who also is the congressional liaison officer for the Montgomery VA Regional Office, was also recognized.