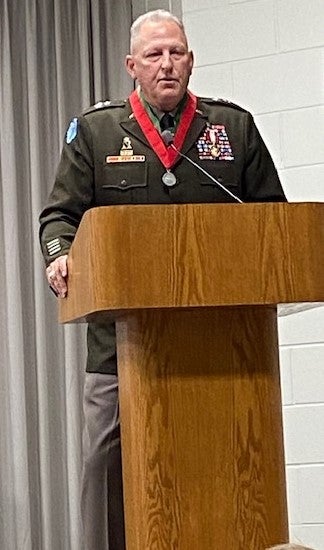 COL (Ret) Garry D. Patterson attended the retirement ceremony for Major General Patrick Hamilton on Sunday, 31 October 2021.MG Hamilton is retiring after a distinguished military career that spanned more than 35 years.  During the ceremony he was recognized for his dedicated and superior service as a commander at every level from platoon, company, battalion, brigade and division level.  He was truly a leader of the highest quality and served our State and Nation in an exemplary manner.    During his retirement ceremony he was praised for his self-sacrifice, service during four deployments, and caring for his soldiers.   He recently returned from a year long deployment to Kuwait as the Commanding General of Task Force Spartan.   He was awarded the Distinguished Service
Medal for his exceptionally meritorious service in a duty of great responsibility as the Command General of the 36th Infantry Division and "Task Force Spartan" in Kuwait.

Additional pictures in the Gallery