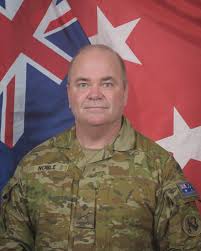 Throughout the period of 1989 to 2004, Major General Noble served in a variety of regimental appointments in cavalry, APC and tank units. He commanded at cavalry troop, squadron and regimental level within the 2nd Cavalry Regiment (ASLAV). Major General Noble has held a variety of non-corps postings. These appointments have included appointment as ADC to the Chief of Army, Staff Officer Grade 2 Operations at Strategic Command and SO1 Concepts in Army Headquarters. During 2002 he was seconded as the Defence Advisor to the Joint
Standing Committee Foreign Affairs Defence and Trade at the Australian Federal Parliament. He was promoted to Colonel and posted to Director of Studies - Land at the Australian Command and Staff College in Canberra in 2007. He was promoted Brigadier in 2010 and has completed appointments as Commander 3rd Brigade, Director Special Operations Capability in Special Operations Command and Director General Land Development, Capability Development Group. He was promoted to Major General in November 2016 and is posted as Deputy
Commander US Army Pacific with effect 1 Mar 2017.

Major General Noble has completed six operational tours of duty. In 1992 he deployed as a Team Leader in the Chemical Destruction Group operating across Iraq as part of the United Nations Special Commission. In 2001-2002 he was deployed to East Timor as the Operations Officer Sector West operating along the East Timor - West Timor border. In 2001 he was deployed as the first joint operations officer in the Australian National Headquarters supporting the initial Australian operations in Afghanistan. In 2005 he commanded the first Al
Muthanna Task Group cavalry battlegroup deployed to southern Iraq. From Dec 11 to Dec 12 he was deployed as the Deputy Operations and Plans Officer for the International Security Assistance Force, Afghanistan. In 2016 he was deployed with the US 101st Airborne Division as Deputy Coalition Land Force Commander, Iraq [DCG CJFLCC-OIR].

Major General Noble holds a first class honours degree in history, a Masters of Business Administration and a Masters of Defence Studies. In 2008 Major General Noble won a General Sir John Monash Award and the DFAT Fulbright Scholarship. He accepted the Monash Award and completed a Masters of International Public Policy (with honours) at the Paul H. Nitze School of Advanced International Studies, John Hopkins University, Washington, D.C. in 2009 (HDC equivalent). He commenced a PhD at ADFA in 2010 on Australian Military Strategy 1901-2006.

He was born in Cairns, Queensland and is a keen surfer, rugby player and fisherman. He is married to the American novelist Daniella Brodsky and they have two daughters Sylvia [4] and Alice [2].