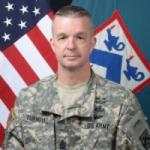 Command Sgt. Maj. Turnbull enlisted in the Army in August 1984 as an Infantryman from Boston, Massachusetts.

After completion of Basic Training and Advanced Individual Training at Ft. Benning, Ga., he was assigned to the 3rd U.S. Infantry Regiment (The Old Guard).