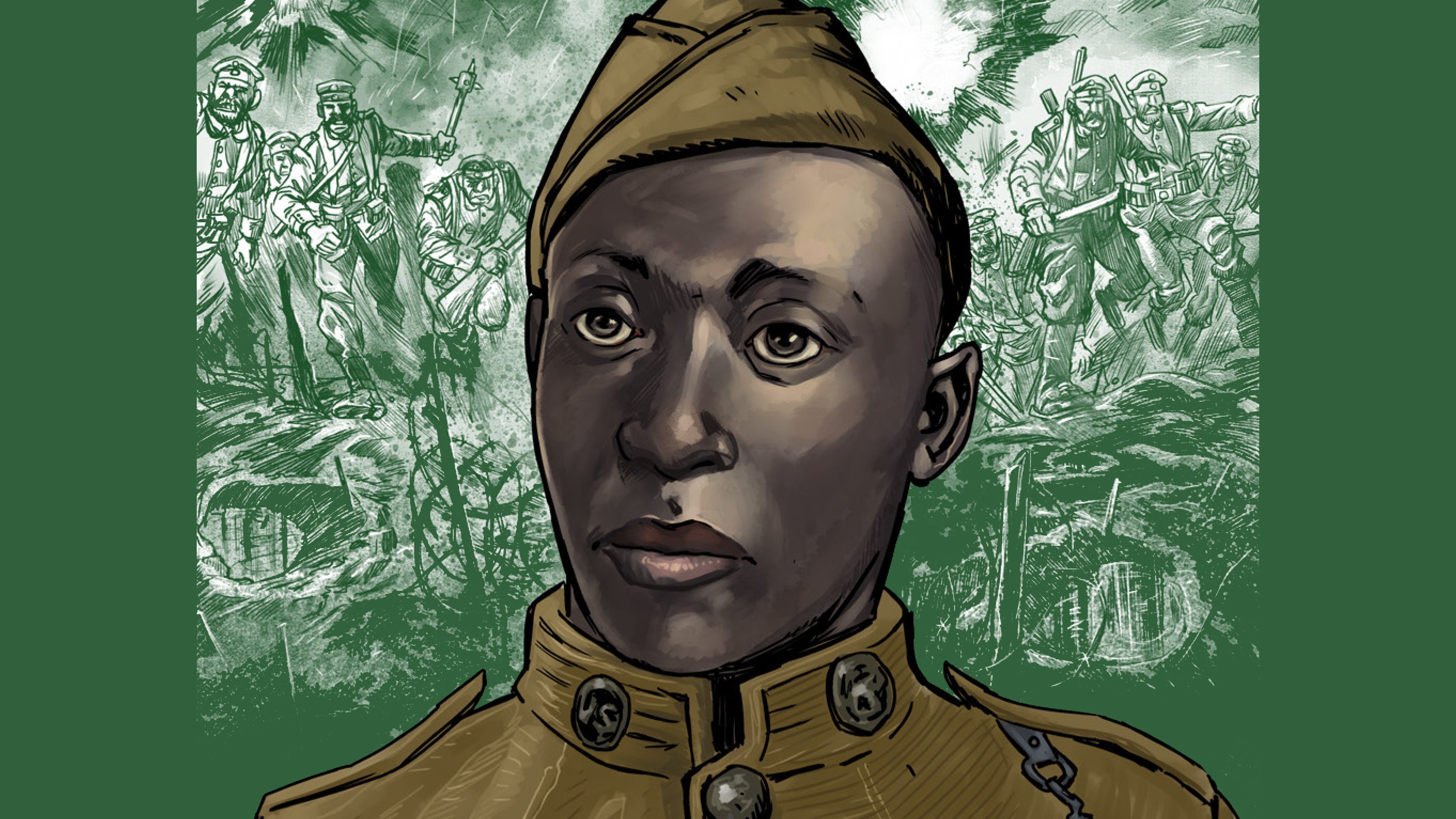 Sgt. Henry Johnson, a member of the famed “Harlem Hellfighters,” is the subject of the newest graphic novel in the Association of the U.S. Army’s series highlighting Medal of Honor recipients.

Medal of Honor: Henry Johnson features the story of Johnson, who served on the Western Front of World War I with the 369th Infantry Regiment, an African American unit that later became known as the “Harlem Hellfighters.”

While on sentry duty, Johnson fought off a German raiding party in hand-to-hand combat, despite being seriously wounded. He was the first American to receive a Croix de Guerre with a golden palm, France’s highest award for bravery, and became a national hero back home.

“Henry Johnson was a household name during World War I, but he has been largely forgotten since then,” said Joseph Craig, director of AUSA’s Book Program. “It took almost a century to recognize his remarkable deeds with the Medal of Honor, and we are excited to share them with a new audience.”

AUSA launched its Medal of Honor graphic novel series in October 2018, producing four issues and a paperback collection. Four new issues are planned for this year; the first, on World War II hero 2nd Lt. Daniel Inouye, was released May 28.

On May 15, 1918, Johnson, then a private with Company C, 369th Infantry Regiment, was on night sentry duty with fellow soldier Pvt. Neadom Roberts when they were attacked by a German raiding party of at least 12 soldiers, according to his Medal of Honor citation.

Under intense enemy fire and despite “significant wounds,” Johnson fought back and caused several enemy casualties. He also prevented a badly wounded Roberts from being taken prisoner by German troops.

Johnson then exposed himself to “grave danger” by advancing from his position to engage an enemy soldier in hand-to-hand combat.

“Wielding only a knife and gravely wounded himself, Private Johnson continued fighting and took his Bolo knife and stabbed it through an enemy soldier’s head,” according to the citation. “Displaying great courage, Private Johnson held back the enemy force until they retreated.”

After returning home from the war, Johnson was unable to return to his pre-war job as a redcap porter at Union Station in Albany, New York, because of the severity of his 21 combat wounds.

He died in July 1929 and is buried at Arlington National Cemetery in Virginia.

Johnson was posthumously awarded the Purple Heart in 1996 and the Distinguished Service Cross in 2002. The award was upgraded to the Medal of Honor in 2015.

This year’s two remaining graphic novels will highlight Dr. Mary Walker, a Civil War surgeon and the only woman to receive the Medal of Honor, and Cpl. Tibor Rubin, the Holocaust survivor who later fought in Korea.

Each graphic novel is created by a team of professional comic book veterans. The script for the graphic novel on Johnson was written by Chuck Dixon, whose previous work includes Batman, The Punisher and The ‘Nam. Pencils, inks and the cover were done by P.J. Holden, who has worked on Judge Dredd, Battlefields and World of Tanks.

Colors were by Peter Pantazis, who has worked on Justice League, Superman and Wolverine, and the lettering was by Troy Peteri, who previously worked on Spider-Man, Iron Man and X-Men.

To download Medal of Honor: Henry Johnson and for more on the series, visit www.ausa.org/moh.