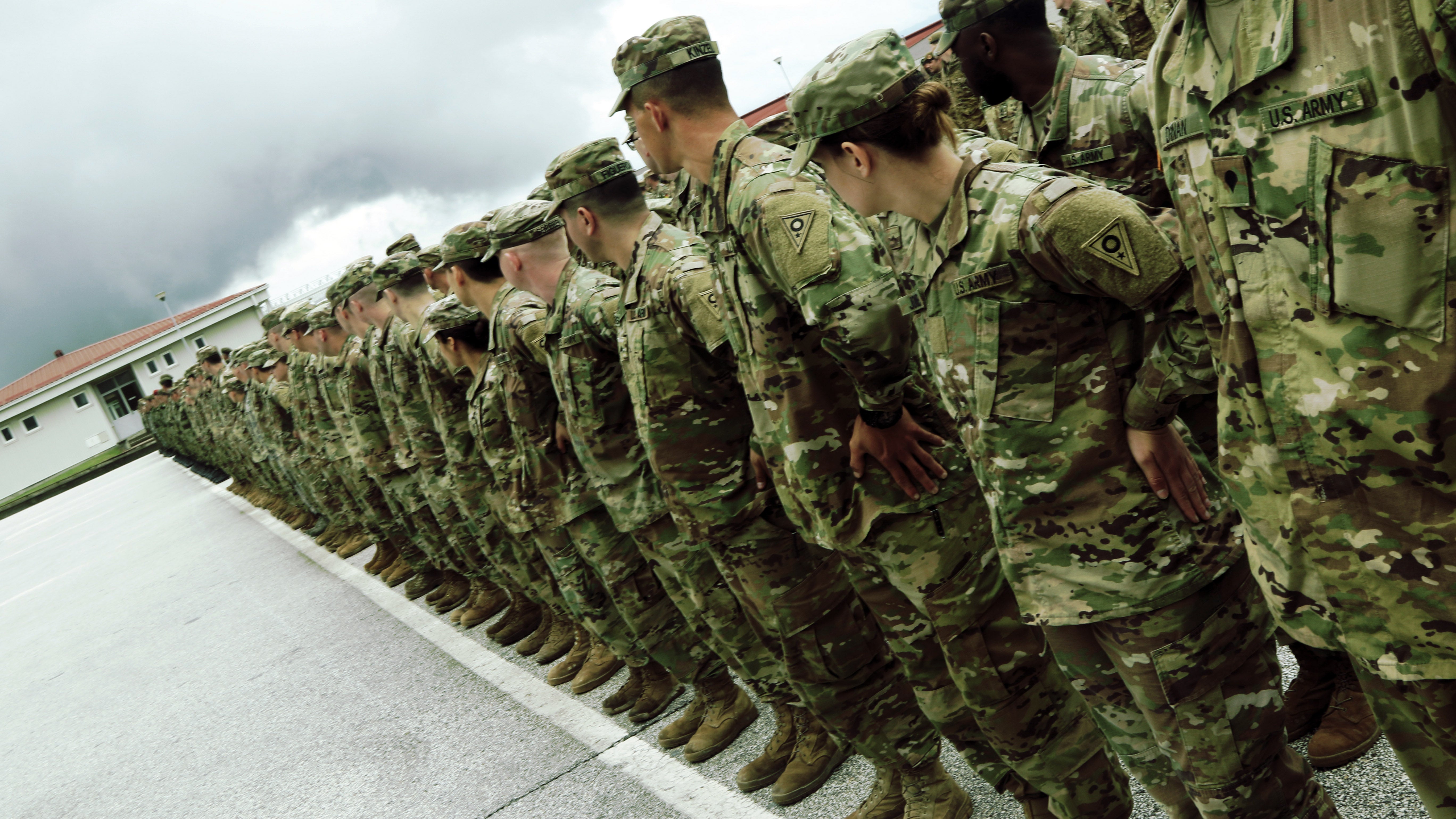 Being a leader in the Army has always been challenging, but this Commentary by retired Lt. Gen. James Dubik shows the daunting environment facing today’s soldiers. In my nearly 38 years of service, I faced many leadership tests but nothing so complicated as trying to modernize and prepare the Army for a complex future battlefield while facing the vexing problems of suicide, sexual assault and extremism in the ranks. Independently, each is a serious matter. Combined, they create a potential whirlwind of problems with no easy remedy. Dubik’s essay calls for firm, definitive and public stands by Army leaders at all levels to restore our values.

The size and number of far right and far left extremist groups are increasing. Army leaders need not question whether the number of such extremists in their ranks is also rising. The facts confirm it. Retired general officers inciting extremist groups, former and current officers and enlisted members participating in the Jan. 6 assault on the U.S. Capitol, and the need to “vet” National Guard soldiers securing the presidential inauguration of Joe Biden—all should give every senior Army leader pause. I am sure it does.

Former Defense Secretary Chuck Hagel wrote in a Jan. 19 Defense One article that “our most serious threats are internal, not external. Politically inspired armed insurgents, extremists, fascist groups and other active destructive forces are now part of the American landscape.” Membership in these groups associated with violence—whether white supremacist, anarchist, sovereign citizens movement, militias, anti-fascist, anti-government or anti-authority, gangs or some other still-emerging organization—pose a risk to Army values and to the reliability of the Army’s service to the nation.

Members of these groups insidiously infect a unit, and if left to spread like a contagion, will erode the Army’s credibility in the eyes of the American public and in the eyes of its elected officials. Officers, sergeants or soldiers who are members must be identified and challenged, for their loyalty to Army values and to their oath is in question. Association with these kinds of extremist organizations is inconsistent with selfless service to the nation.

Previous Army leaders have faced vexing societal problems, whether countering racism in the ranks, sexual harassment and abuse, gender and sexual orientation discrimination, or gang membership, but this may be the most challenging threat yet—for it involves potentially seditious and treasonous behavior.

Two points are worth remembering. First, the Army is people. So these kinds of problems are perennial. Matters such as these cannot be permanently eradicated from the human heart or from human behavior. Second, narrowly focused, short-term fixes won’t work.

Senior leaders—civilian, officers and NCOs alike; active, Guard and Reserve—must take a firm, definitive and public stand on this issue. They must act in concert, using all the command and leadership levers to ensure the priority of Army values, to emphasize the oath as members of the profession of arms and to secure the commitment of leaders at every level to those values and to their oaths. Social scientists as well as those who study violent extremism know that group membership, proximity to likeminded others and the digital echo chamber are the ingredients to accelerated radicalization. These conditions are already present in the Army. A clear, firm and comprehensive approach will affirm the Army’s reliability and reputation.

My expectation is that by the time this essay is published, such a campaign plan will already be in development or underway. Defense Secretary Lloyd Austin told Congress he intends to work to rid “racists and extremists” from the ranks of the U.S. military. After almost 20 years of dealing with jihadi radical extremists, the Army has learned a bit about the radicalization and deradicalization process. Unfortunately, it now must apply some of that learning to itself.

The plan should not be a witch hunt or a “just throw them out” approach. The Army has a lot invested in soldier and leader training and development. Whatever plan that emerges, therefore, must include some component of reeducation and deradicalization and should reflect the best of previous actions to address similar problems, a soup-to-nuts plan that focuses on a rededication of Army values and the oath to the nation. It starts with recruitment.

Recruiters provide the raw material for future soldiers and leaders. But are recruiters properly trained and equipped, and do recruiting policies and processes exist to weed out already radicalized citizens? Figuring out how to do this right will be a difficult challenge. The pool of potential soldiers is already dwindling. Adding one more filter in identifying a potential soldier may make an already dwindling pool even more shallow.

Next is basic training, where the initial education in Army values and commitment to oath begins. The Army will have to modify instruction to emphasize why violent extremism of any variety runs counter to service in the Army. Drill sergeants and other cadre will have to keep their watchful eyes and ears open to signs of extremism in the ranks.

The officer and NCO education program will also have to adapt. Leaders, especially at the squad through company levels where the soldier-leader relationship is closest, need to understand what to look for in conversations, in the barracks, on privately owned vehicles and on soldiers’ bodies. Tattoos say a lot.

The information provided in the schoolhouse will also have to be distributed to leaders throughout the Army for use in organizational professional development sessions. The Army has always relied on both institutional and organizational leader development. That will play an important role in addressing extremism.

More senior leaders—commanders and command sergeants major—also have important roles to play. First, they set the climate within their organization. How Army values are lived is an important part of any command climate. They also execute command inspection programs. Such programs are always adapting; the challenge is how to incorporate anti-extremism into the existing inspection programs.

Inspectors general throughout the Army can assist in helping senior commanders provide the right guidance and conduct follow-on inspections and interviews to identify strengths and weaknesses across major units and organizations.

Finally, a comprehensive approach to ridding the ranks of or deradicalizing extremists may require new, or modified, legal or regulatory guidance from the Army’s most senior leaders.

Such comprehensive action will not be easy. Some of what is needed falls into the category of enforcing good order and discipline; other actions are best understood as education and training. In the process of designing and executing its plan, the Army may find new organizations are necessary, such as when it created offices of equal opportunity, or modifications to current organizations like expanding the scope of responsibility for inspectors general.

Whatever ends up as the Army’s plan, this much is clear: Participation in domestic violent extremist groups is as incompatible with military service as is participation in foreign-rooted groups.

Though some claim First Amendment rights, this amendment does not protect criminal activity or anyone participating in groups that promote violence. No one has the right to be a member of a domestic violent extremist group—especially anyone serving in uniform.

Addressing this problem will take time; success will not come from merely issuing a directive. It will take sustained, focused leadership from officers and sergeants at every echelon of command and in every Army organization. “Not in my squad” should become the motto to the deradicalization effort.

The Army has helped build America before. The Army became a model for racial desegregation, as it was for incorporating women into the ranks and expanding their opportunities.

Helping America deradicalize is yet another chapter in the Army’s long history of not just reflecting America but building America. Deradicalizing must be done and it can be done. The Army and the nation will be better for it.

Lt. Gen. James Dubik, U.S. Army retired, a former commander of Multi-National Security Transition Command-Iraq, is a senior fellow of the Association of the U.S. Army. He holds a doctorate in philosophy from Johns Hopkins University, Baltimore, and is the author of Just War Reconsidered: Strategy, Ethics, and Theory.