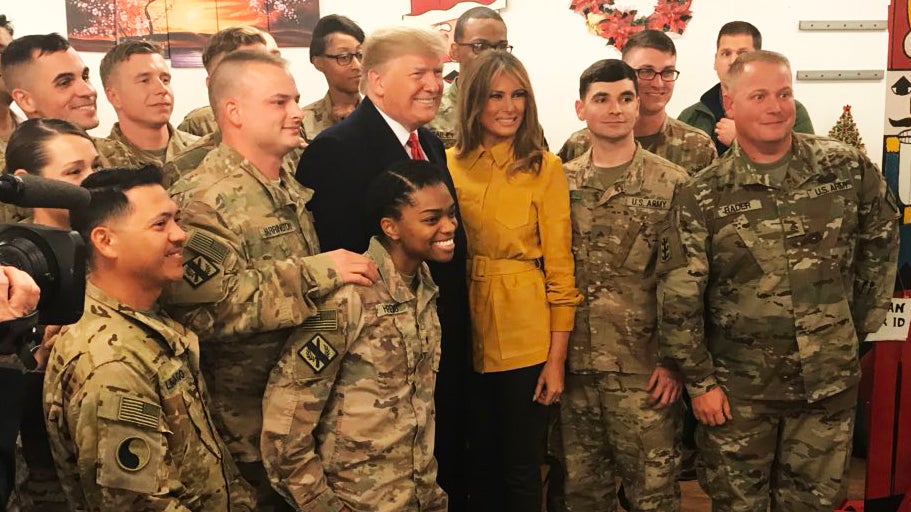 In a surprise trip to see U.S. troops in Iraq, President Donald Trump said he came to al-Asad Airbase “to personally thank you and every service member throughout this region for the near-elimination of the ISIS territorial caliphate in Iraq and Syria.”

“Great job,” he told them to cheers. “We will be watching ISIS very closely,” Trump said, referring to the Islamic militant group known as the Islamic State in Iraq and Syria.

First lady Melania Trump accompanied him on the trip.

Earlier, Trump had announced plans to withdraw U.S. troops from Syria but he made clear he was not cutting troops in Iraq and saw the possibility, if needed, of sending Iraq-based forces back into Syria. He called for a “strong, deliberate and very orderly withdrawal” of U.S. forces from Syria.

“If we see something happening we don’t like, we can hit them so fast and so hard they won’t really know what happened,” he said. “Men and women who serve are entitled to clear objectives and the confidence that when those objectives are met they can come home and be with their families.”

“I am very honored to be here tonight. I thank you for your service, for your sacrifice and keeping us safe and free,” he said. “Speaking for your families, they are missing you and they love you, and you know they are every bit a part of your success.”

“No enemy on Earth can match the awesome strength of American soldiers, sailors, airmen and Marines. Nobody is even close, and nobody is even close in terms of our equipment,” Trump said. “You strike fear into the hearts of our enemies and bring comfort to all of our allies and those who cherish peace. We want peace, and the best way to have peace is strength. When we are strong, we are going to have peace.”