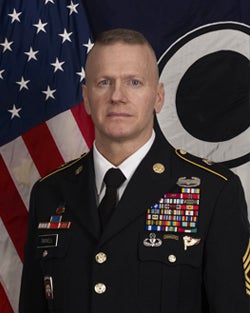 The next senior enlisted advisor to the chairman of the Joint Chiefs of Staff is an Army command sergeant major who is highly respected for involvement in joint and international operations.Command Sgt. Maj. John W. Troxell is a 33-year veteran currently assigned to U.S. Forces Korea who spoke in May at an Association of the U.S. Army-sponsored event about the importance of communication. "We are never going to face another fight alone, by ourselves,” Troxell said at AUSA’s LANPAC Symposium and Exposition in Honolulu, urging enlisted leaders to sharpen their communications skills so they can earn the trust and respect of other militaries. He provided an example, saying he uses a litter-carrying drill to build bonds even when soldiers don’t speak the same language. Ten men carrying a large American soldier over a long distance is a difficult task, he said, but “at the end, everybody feels part of the team.” Litter carrying is not his only drill. Troxell-led exercise routines can include tractor tires, telephone poles and heavy chains.Troxell will be only the third person to serve as the JCS chairman’s principal advisor on enlisted matters, but the second soldier. The first-ever person to hold the job was Army Command Sgt. Maj. Willian Gainey, who served from October 2005 to April 2008. Gainey was succeeded by the current advisor, Marine Sgt. Maj. Bryan Battaglia, who is retiring.Chairman of the Joint Chiefs Marine Corps Gen. Joseph Dunford described Troxell as “someone soldiers, airmen, Marines and sailors can look up to. He can inspire people, and he is someone I trust to tell me things straight.”A Defense Department statement says Troxell “will serve as the armed forces' most senior noncommissioned officer and the principal military advisor to the chairman and the secretary of defense on all matters involving joint and combined total force integration, utilization, health of the force and joint development for enlisted personnel.”Married with three children and two grandchildren, Troxell has five combat tours, including Operation Just Cause, Operations Desert Shield and Desert Storm, two Operation Iraqi Freedom tours and one tour in Operation Enduring Freedom.