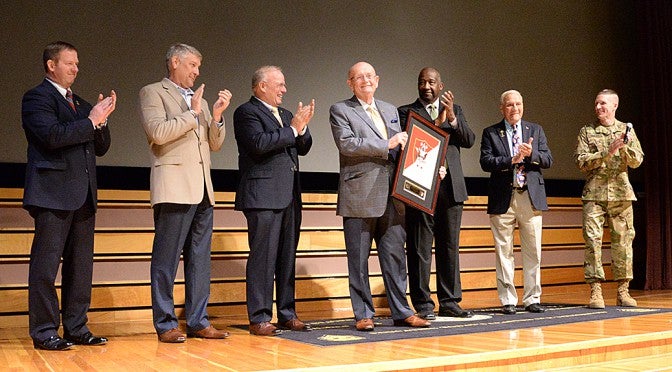 Retired Army Gen. Gordon R. Sullivan has been named the first honorary Sergeant Major of the Army. Sullivan, the Association of the U.S. Army’s president and CEO, received the honor during an April 12 ceremony at Fort Bliss, Texas. The 32nd Army Chief of Staff, who retired in 1995 after 36 years of service, described NCOs as both the backbone of the Army and people he admire from his earliest days of service. The NCOs and former NCOs who taught basic Army skills to him at Fort Knox, Ky., when he was attending the basic course for Army officers, reminded him of the older construction workers who helped him during summer jobs. “I liked those guys,” he said. “The glue that connects all of it together is the noncommissioned officer,” Sullivan said. “We have a world-class Noncommissioned Officer Corps, and we’re very fortunate to have it.” Sergeant Major of the Army Daniel A. Dailey said Sullivan deserves the honorary award for being “a great mentor, a great leader and a great soldier, through his entire life, who still to this day represents who we are and what we stand for.”