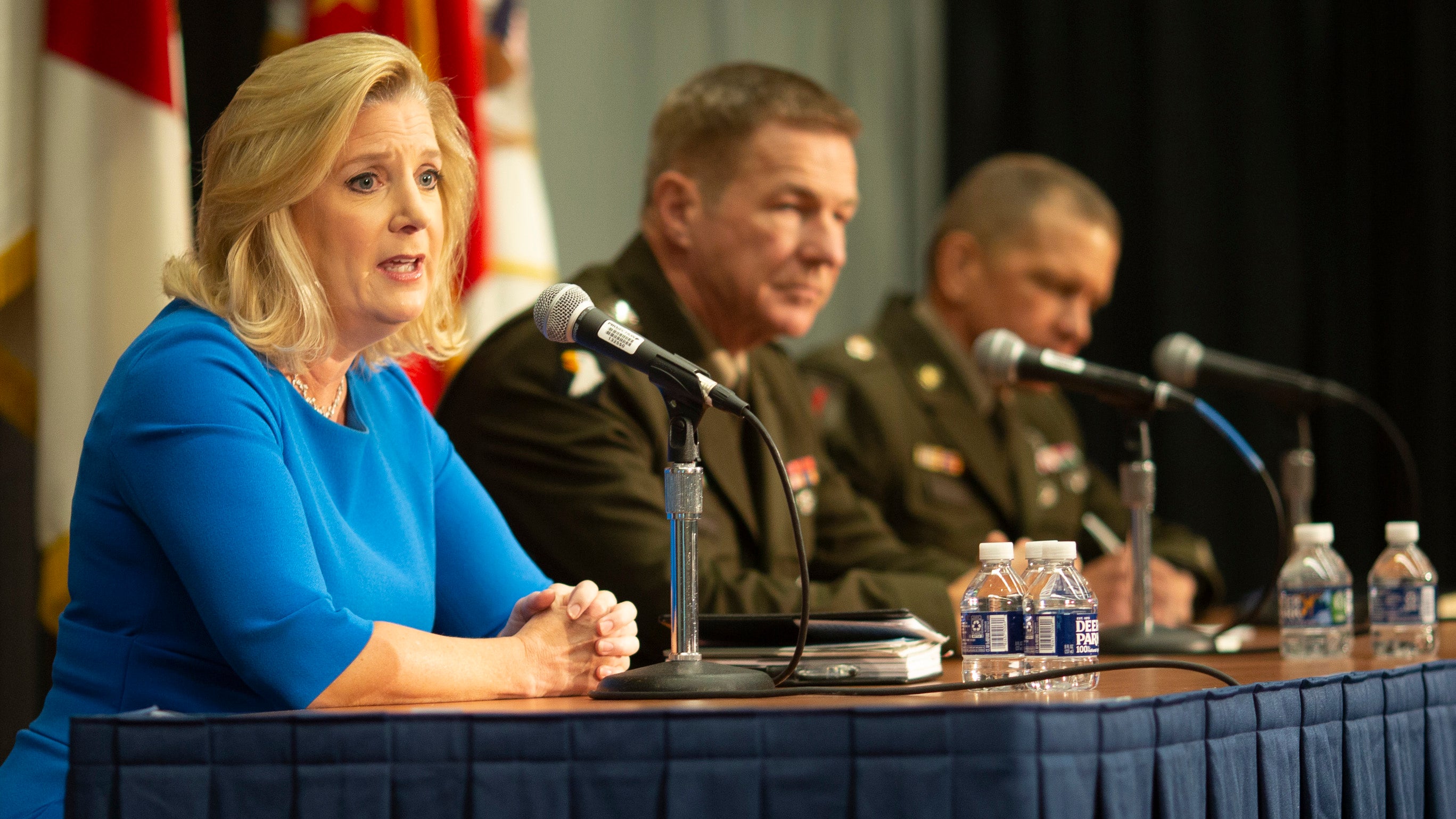 Early results of a preparatory program for Army recruits “look pretty promising,” and the effort will soon be expanded if more progress is made, according to Army leaders.

“Depending on how that plays out in the next month or two, I think we will look at expanding that to some additional training sites, which would obviously help us,” Army Secretary Christine Wormuth said Oct. 10 during a press conference at the Association of the U.S. Army’s 2022 Annual Meeting and Exposition.

“The early results of [the program] look pretty promising,” she said.

Aimed at giving new recruits a leg up to meet the Army’s rigorous academic and physical standards, the three-week Future Soldier Preparatory Course was launched Aug. 8 at Fort Jackson, South Carolina. It is the Army’s hope that the course, and other initiatives, will help break the recruiting slump that has resulted in massive shortages in end strength.

If the program is expanded, it would be established at the Army’s other basic training locations at Fort Benning, Georgia, Fort Sill, Oklahoma, and Fort Leonard Wood, Missouri, and will focus on academics, according to Lt. Col. Randy Ready, a spokesman for the Center for Initial Military Training.

The Army and the other services are facing a recruiting crisis after the COVID-19 pandemic forced recruiters to miss out on almost two years of face-to-face contact with high schoolers, and an uptick in the cohort of young people who are either unfit or unwilling to serve. There is also a low unemployment rate and competition from the private sector.

In addition to the program, Wormuth said the Army is using data-driven analysis to increase marketing, and she pinned hopes on the new Recruiting Task Force to come up with “the next big thing,” such as the prep course, to help attract young people to the Army.

The secretary also noted that five active-duty divisions have been partnered with the Army’s five recruiting brigades since the summer to lend support in planning and analysis and tap into the expertise of former recruiters who are now assigned to the operational formations.

Pointing out at the press conference that more than 80% of soldiers come from military families, Army Chief of Staff Gen. James McConville emphasized the importance of veterans, families and communities taking opportunities to educate the public about the Army through their own experiences.

“We think that’s really important. We also think it’s really important to get our soldiers who are very successful in the Army to go back to their high schools and their communities and talk about what a difference it has made their life,” McConville said. “We’ve opened up our gated communities so people can see the life of a soldier.”

McConville said the initial results of the Future Soldier Preparatory Course “may fundamentally change the way that we do recruiting,” by giving young men and women who may not test well on the Armed Services Vocational Aptitude Battery a chance to demonstrate their commitment—or lack of commitment—to serving as soldiers.

“We think this is very, very valuable because we can do this right up front before we invest a lot of resources in what it takes to go to initial entry training,” McConville said.

Recruiting challenges are not unique to the Army, said Sgt. Maj. of the Army Michael Grinston, who added that as the largest of the military services, the Army has “a larger accessions mission” in an environment where everyone is “trying to get the best talent.”

“We all need to get out there and talk about our Army. Everybody,” Grinston said. “We are your Army, we’re not somebody else’s Army, we are the American people’s Army, and we serve to defend our country. That is a respected profession.”