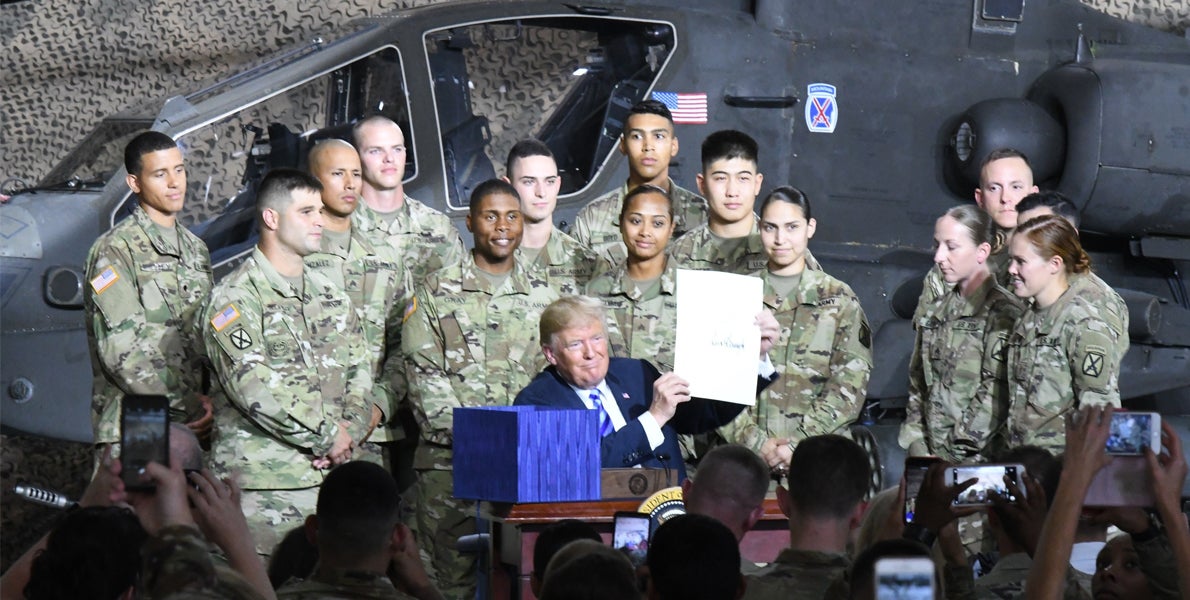 President Donald Trump praised the 10th Mountain Division during an Aug. 13 visit to Fort Drum, N.Y., and joked with the crowd.

“Nobody stands a chance against you folks,” Trump said to a packed house of soldiers who watched him sign the 2019 National Defense Authorization Act, a measure that includes a 2.6 percent raise, the biggest pay increase for the military in nine years.

“America will always rise to every challenge and overcome every danger, because we are backed by the strength and power of the American soldier,” Trump said, noting the bill he signed “will give America’s warfighters the firepower they need to win any conflict quickly and decisively.”

The president joked about the raise. “I know you don’t want it because you are very patriotic. You’ll say just save the money,” Trump, asking for a show of hands of soldiers who didn’t want the pay increase. He laughed, as did the crowd. “What’s going on here? Are these real patriots?” he said, appearing to address the questions to Maj. Gen. Walter E.  Piatt, the 10th Mountain Division commanding general.

Trump also recognized Spc. Michael Lima, an infantryman from the 3rd Squadron, 71st Cavalry Regiment, 1st Brigade Combat Team, who is the 10th Mountain Division’s Soldier of the Year, and Ashley Shepard, the wife of Sgt. 1st Class Ian Shepard, a family readiness group volunteer. Trump asked Lima if the specialist was interested in working for the president. Trump said Ashley Shepard “supports military families in every way you can imagine,” and thanked her and her husband for their service.

He ended the afternoon surrounded by soldiers as he signed the bill.