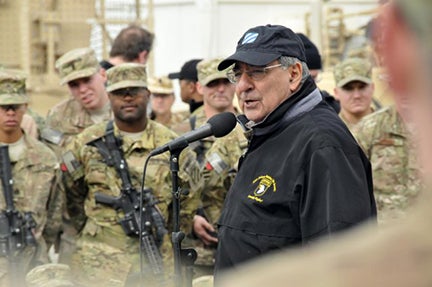 Former Secretary of Defense Leon Panetta will receive the 2015 George Catlett Marshall Medal, the highest award presented by the Association of the United States Army.Awarded annually to an individual who has exhibited selfless service to the United States of America, the medal will be presented to Panetta by the Association’s Council of Trustees.He will be recognized for his contributions to the United States of America as a strong supporter of national defense and his devotion to those men and women who have served or are now serving in our armed forces to protect our freedom and liberty.“His service exemplifies his unique and patriotic commitment to the highest American ideals,” an AUSA official said.The award presentation will take place Oct.14 at the George Catlett Marshall Memorial Dinner, the final event of the Association’s three-day Annual Meeting and Exposition at the Walter E. Washington Convention Center in Washington.“Leon Panetta is a shining example of selfless service. He has almost 50 years of service to our nation, as an Army officer, a member of Congress, the 23rd Defense Secretary, CIA Director, White House Chief of Staff and one of our nation’s top minds on the federal budget,” Gen. Gordon R. Sullivan, USA, Ret., AUSA president and CEO, said.He added, “The son of Italian immigrants, he has often spoken of living the American dream and giving his heart and soul to our nation.“Our award is a sign of our gratitude to him.”Panetta, a Monterey, Calif., native, joined the Army in 1964 after graduating magna cum laude from Santa Clara University with a degree in political science and from this university’s school of law as a Juris Doctor.He then served two years as an Army military intelligence officer.Panetta came to Washington, D.C., in 1969, serving in the Nixon administration then launching his own political career in 1971 when he ran for and won a seat in Congress representing California’s 16th congressional district.He remained in Congress until 1993, becoming an expert on the federal budget, eventually serving as a member and later chairman of the House Committee on the Budget.He was also vice chairman of the Vietnam-Era Veterans Caucus.He left Congress to become director of the White House’s Office of Management and Budget during the Clinton administration, and later became Clinton’s chief of staff.Panetta retired to his California walnut farm at the end of the Clinton administration, but returned in 2009 to be director of the Central Intelligence Agency for President Obama.In 2011, Panetta replaced Defense Secretary Robert Gates – a holdover from the Bush administration – as Pentagon chief.Presiding over a Defense Department in a time of war, Panetta used his expertise on the federal budget to argue that cutting the military’s budget and risking sequestration if Congress couldn’t reach agreement on spending priorities was a danger to national security.He had several rules for budgeting, including one that said the nation “cannot hollow out the force.”He explained that after World War II, the Korean War, Vietnam and the Cold War, “cuts were made across the board and it hollowed out the force, it weakened our military. …We cannot make that same mistake.”He also was responsible for overseeing implementation of the repeal of the military’s homosexual ban, and announced the Defense Department would allow women to enter all combat specialties after an assessment by the services.At a 2012 town hall meeting with soldiers and their families at Fort Bliss, Texas, Panetta said one of the toughest tasks he faced as defense secretary was writing condolence letters to families. “I extend my deepest condolences on the behalf of all of us, but in each note, I make the point that their loved one is a hero and a patriot because they were willing to put their life on the line and to die for this country, and that is what patriotism – that’s what heroism is all about,” Panetta said.Adding, “For that reason, we will never forget them and we will never forget you for what you do.”