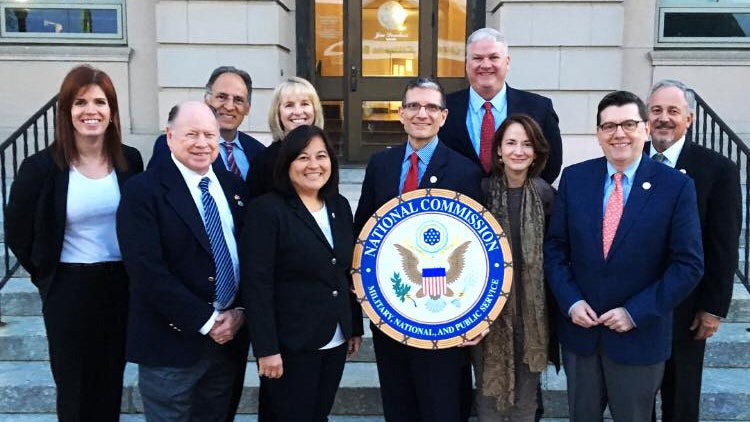 Photo by: National Commission on Military, National and Public Service

An interim report from the National Commission on Military, National, and Public Service says unfamiliarity with the benefits, opportunities and realities of military service present an obstacle that could be addressed with a nationwide campaign.

In a year of study, including meeting with a broad cross section of Americans, the commission headed by former U.S. Rep. and retired Army Brig. Gen. Joseph J. Heck discovered, as military recruiters have found, many service-aged youths don’t know much about the military and don’t know anyone who has served.

“We heard concerns from both military members and those who have not served in the armed forces that, as the gap between the military and the rest of the American public widens, the awareness of the military and its opportunities decreases,” says the interim report released Jan. 23. “This limits otherwise qualified young Americans from gaining the experiences and benefits of military service.”

Currently serving military members also raised concerns “about the false narratives or perceptions about the military from television, movies, the internet, and video games: depictions that tend to focus on the most dangerous jobs and can at times be inaccurate,” the report says.

Recruiters face some obstacles meeting students because of school policies, which means many people don’t know about the educational and vocational opportunities provided by the military, nor are they aware of how to apply for things like ROTC scholarships.

For a combination of reasons, many service-age youths don’t qualify for military service. “Medical issues, weight, body art, a history of drug use, educational attainment, or a criminal record may disqualify a person from military service,” the report says, adding, “Some of these barriers reflect major societal challenges, such as nutritional choice and lack of physical activity. Others result from changing attitudes. For example, more Americans have difficulty meeting the military’s eligibility standards because tattoos have become more commonplace and some states have legalized the possession and use of marijuana. Other barriers may be explained by increased rates of diagnosis and treatment of mental and behavioral health issues.”

The commission expects to make formal recommendations to Congress next year.

The interim report suggests it will propose a wider plan to promote public service, with a specific pitch toward military service.

Additionally, the commission wants to spend money educating parents, teachers and counselors about military service opportunities, to increase the number of high school students taking a military aptitude test that would identify their strengths and career interests, and to offer “new pipelines” to military service such as providing financial support for students getting civilian technical certifications in return for a service commitment.

The commission is also looking at the idea of opening draft registration to women.

The report is available here: https://www.inspire2serve.gov/NCOS%20Interim%20Report.pdf