McHugh on Budget: ‘We Need to Stop Talking, Start Acting’

McHugh on Budget: ‘We Need to Stop Talking, Start Acting’ 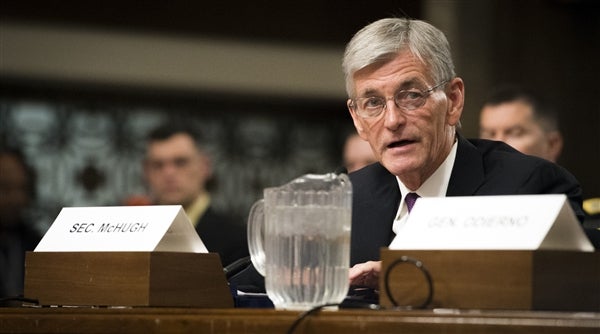 “We must have an end to sequestration this year,” Secretary of the Army John M. McHugh testified Tuesday before the House Armed Services Committee. “We need to stop talking and start acting.”McHugh and Army Chief of Staff Raymond T. Odierno testified along with other service leaders before the House panel that largely supports an end to sequestration and a rise in defense spending over the caps set in 2011. As they were speaking, negotiations were underway on the 2016 defense budget to, at a minimum, provide the $566 billion base budget requested by President Barack Obama, an amount greater that the $523 billion limit set in the 2011 law.The Army’s share of the 2016 budget is $126.5 billion.There is a push by the chairmen of the House and Senate Armed Services committees to increase defense spending to about $577 billion for 2016. One idea being considered to get around the budget caps would increase the $50.9 billion overseas contingency operating fund, which does not count against the caps. This budgetary gimmick could resolve the 2016 budget problems but is not a sure thing because it would pass only with bipartisan support.There is nothing new in an anti-sequestration message from Army leaders but the warnings are becoming more frantic. McHugh calls sequestration “an enemy here at home” and warns Army personnel levels, already considered by many to be too low, “will be reduced to unconscionable levels” if Congress fails to prevent or reduce the sequestration. Cuts, if they happen, would begin in January.“Our Army, your Army, faces a dark and dangerous future unless the Congress acts now to end these ill- conceived and inflexible budget cuts,” McHugh said. “I want to be very clear here: every installation, every component, and nearly every program will feel the brunt of these cuts.”The Army needs a minimum of 980,000 soldiers, McHugh said. That would be 450,000 active-duty troops, 335,000 in the Army Guard and 195,000 in the Army Reserve. Under sequestration, the Army could end up with only about 25 percent of the force considered combat-ready, down from already low 33 percent measured today, Odierno said. The Army needs to be 70 percent combat ready, a process that requires money for equipment and spare parts, and money and time for training, Odierno said.“If something bigger happens, we will not be able to respond in the way people expect of us,” Odierno said.