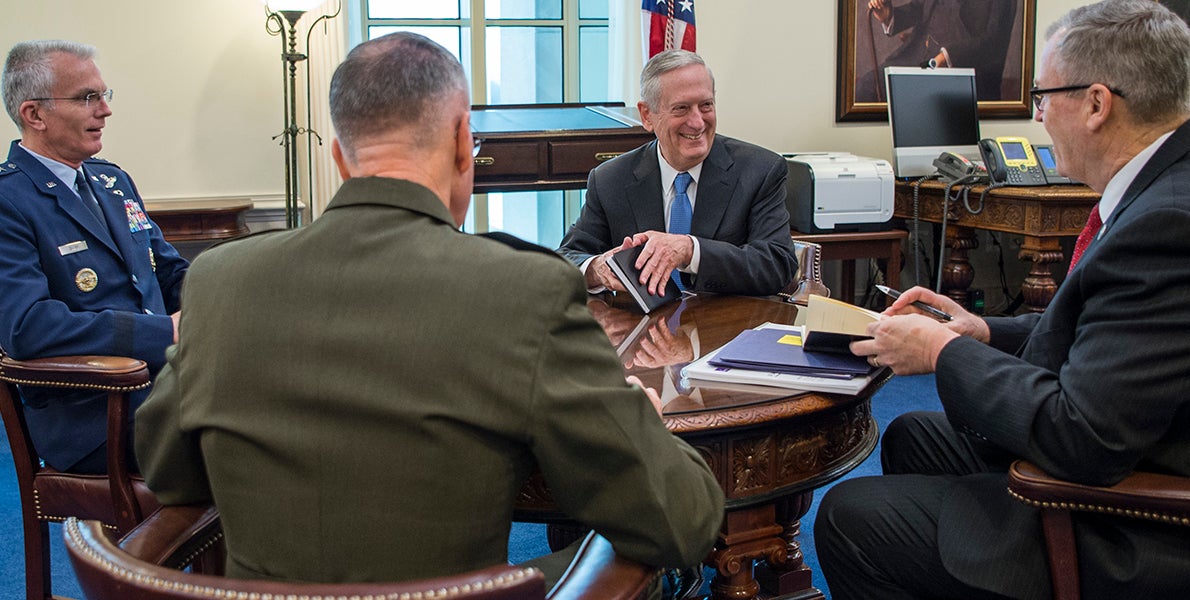 A message from the new defense secretary and a policy statement from the White House give an indication of changes to come.

Defense Secretary James Mattis, a retired Marine Corps general, issued this statement shortly after he was sworn in on Jan. 20: “It’s good to be back, and I’m grateful to serve alongside you as Secretary of Defense. Together with the Intelligence Community we are the sentinels and guardians of our nation. We need only look to you, the uniformed and civilian members of the Department and your families, to see the fundamental unity of our country. You represent an America committed to the common good; an America that is never complacent about defending its freedoms; and an America that remains a steady beacon of hope for all mankind."

“Every action we take will be designed to ensure our military is ready to fight today and in the future. Recognizing that no nation is secure without friends, we will work with the State Department to strengthen our alliances. Further, we are devoted to gaining full value from every taxpayer dollar spent on defense, thereby earning the trust of Congress and the American people. I am confident you will do your part. I pledge to you I’ll do my best as your Secretary.”

Shortly after President Donald Trump took the oath of office, the White House posted this statement on defense and foreign policy: “The Trump Administration is committed to a foreign policy focused on American interests and American national security. Peace through strength will be at the center of that foreign policy. This principle will make possible a stable, more peaceful world with less conflict and more common ground.

“Defeating ISIS and other radical Islamic terror groups will be our highest priority. To defeat and destroy these groups, we will pursue aggressive joint and coalition military operations when necessary. In addition, the Trump Administration will work with international partners to cut off funding for terrorist groups, to expand intelligence sharing, and to engage in cyberwarfare to disrupt and disable propaganda and recruiting.

“Next, we will rebuild the American military. Our Navy has shrunk from more than 500 ships in 1991 to 275 in 2016. Our Air Force is roughly one-third smaller than in 1991. President Trump is committed to reversing this trend, because he knows that our military dominance must be unquestioned. Finally, in pursuing a foreign policy based on American interests, we will embrace diplomacy. The world must know that we do not go abroad in search of enemies, that we are always happy when old enemies become friends, and when old friends become allies. The world will be more peaceful and more prosperous with a stronger and more respected America.”