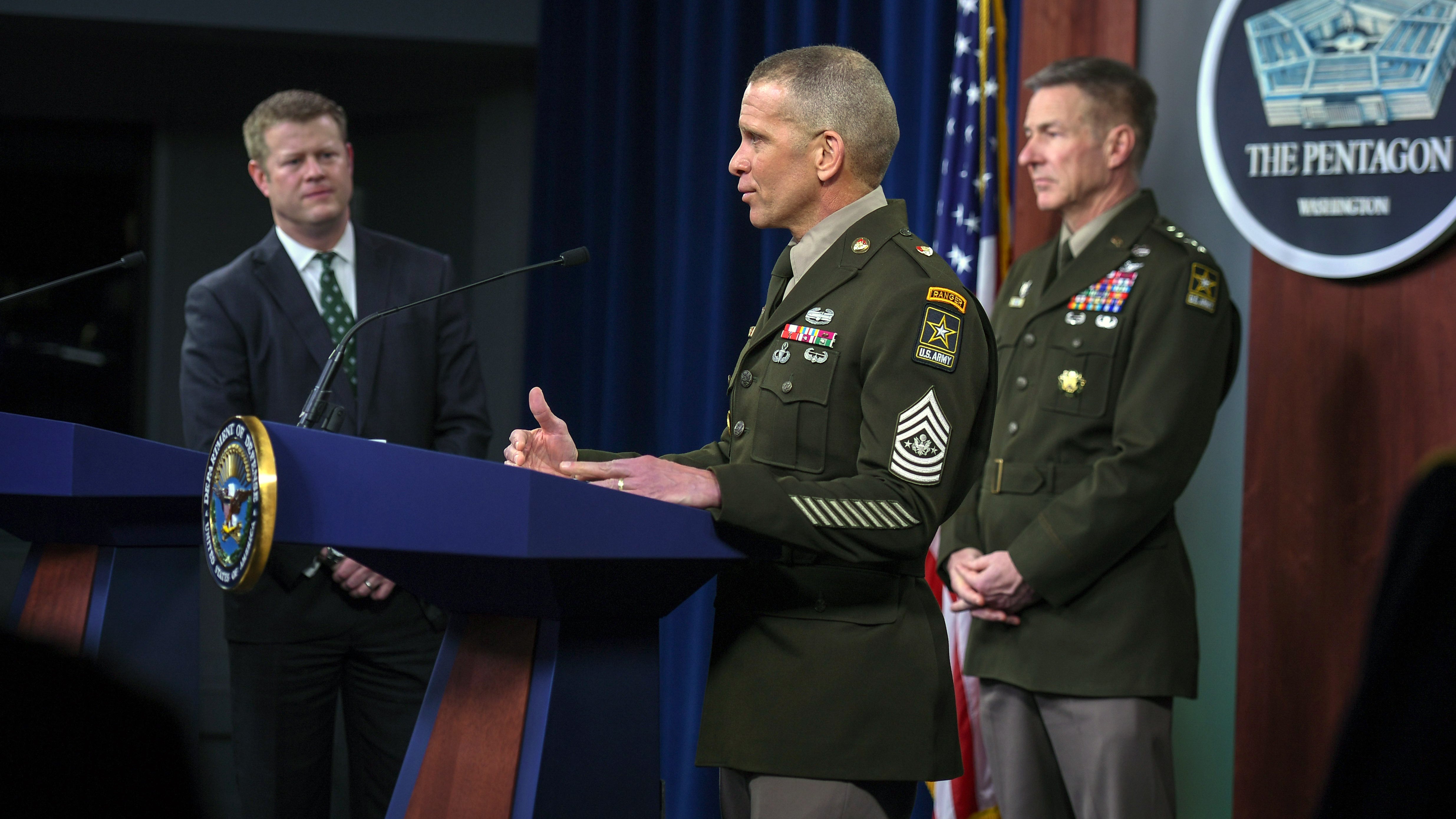 Senior Army leaders answered questions and sought to reassure the force during a virtual town hall April 7 as soldiers and families continue to grapple with the ongoing COVID-19 pandemic.

“Life threw us a curveball, but we’ve got the greatest Army in the world,” said Sgt. Maj. of the Army Michael Grinston. “This uniform means hope, and we will get through this.”

Grinston, Army Secretary Ryan McCarthy and Army Chief of Staff Gen. James McConville answered questions submitted by soldiers on issues including a two-week pause in shipping new recruits to basic training, a halt on permanent change-of-station moves, the delayed rollout of the Army Combat Fitness Test, grooming standards during the pandemic and testing for the novel coronavirus.

On April 6, the Army announced a two-week shipping delay for recruits who were getting ready to ship to basic training.

The same day, Gen. Paul Funk, commander of Army Training and Doctrine Command, said during a news briefing that there were 54,000 trainees and 46,000 permanent party personnel across the Army’s training base. Of those, 102 people had tested positive for the coronavirus; 12 have recovered.

“Parents are sending us their sons and daughters, and we want to make sure we’re providing a safe environment,” McConville said.

The 14-day pause will assist with minimizing the spread of the virus and also allow the service to implement testing capability at initial entry training sites.

“As soldiers come into initial military training, they will be segregated, they will be screened … we’ll be able to make sure there’s been no exposure to COVID-19” before proceeding with training, McConville said.

Recruiting stations may be closed, but the Army is still actively engaged in virtual recruiting, Grinston said. “If anybody that’s out there wants to join the Army, we’re still open for business,” he said.

The Department of Defense has halted PCS moves until May 11, McCarthy said, and the Army is in talks with the defense secretary’s office about how to execute a PCS season as safely as possible.

“We’re working on risk-mitigation measures to ensure household goods and individuals can move around the country and worldwide if necessary,” he said.

Some families have moved their furniture and vehicles and are stuck in temporary housing or hotel rooms, McConville said. Those experiencing unique hardship can request an exception to policy through the chain of command to allow them to move, or they may be eligible to receive compensation for funds used during this time.

McConville added that in the future, he’d like to see families more stabilized by remaining in one location for a longer period of time.

“We want to take care of our soldiers and families, their health and welfare,” McConville said.

Army leaders have delayed plans to start using the new Army Combat Fitness Test as the service’s test of record this October, but soldiers can still train and prepare for the new test while maintaining their current Army Physical Fitness Test score, Grinston said.

“If you have a current APFT, that will carry you until the conditions are set for us to shift to the ACFT,” he said.

Soldiers can still work out, and leaders want their focus to be on the ACFT events. “That’s the test that actually gets you ready for combat,” McConville said.

However, he said, until all units have the equipment for the new test and have had time to prepare for complete implementation, the APFT will remain the test of record.

With many barbershops closed, some soldiers are questioning whether the Army will change or relax its standards for grooming.

“I think everyone just needs to know what the standard is,” Grinston said. For men, that means hair that doesn’t fall to the eyebrows or over the ears, while women are restricted to a list of styles for short, medium or long hair.

“Don’t read into it, just follow that guidance and we’ll be fine,” Grinston said, adding that there’s no need to change the standards for either gender.

The Army has nine labs that can provide testing for COVID-19, and there are new machines coming on board, McConville said.

“What you really want is a lot of throughput,” he said, meaning the capability to test more people in a shorter amount of time. The new technologies should be able to increase that ratio.

The service also wants to implement a test to show previous exposure to the virus, since the machines in place now only test for current diagnoses.

“We may have had soldiers that already had [the virus] and had no symptoms, and we wouldn’t know,” McConville said. A test to show if a soldier has already had the virus would “significantly help us manage risk in the force,” he said.