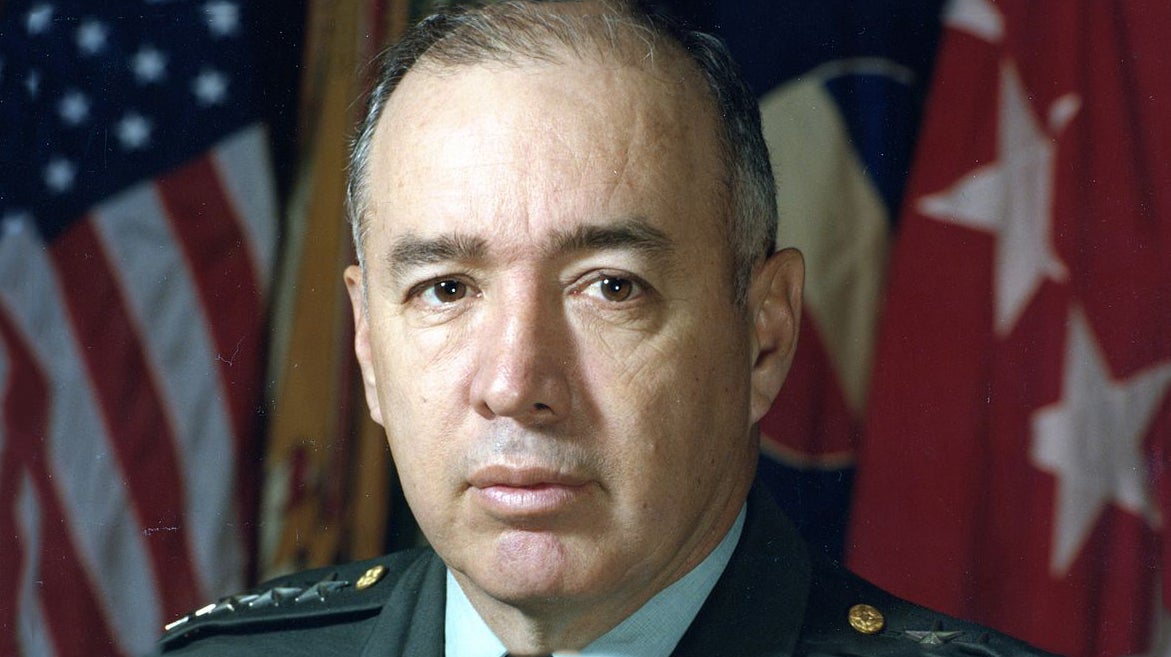 Retired Army Gen. Richard E. Cavazos, who made history in 1982 by becoming the U.S. Army’s first Hispanic four-star general, died Oct. 29 at the age of 88.

The San Antonio Express News reports Cavazos will be buried in the Fort Sam Houston National Cemetery in San Antonio on Nov. 14.

Commissioned in 1951 after graduating as the distinguished ROTC graduate from Texas Technological University, Cavazos saw combat in the Korean War and Vietnam. In 1976, he became the first Hispanic brigadier general in Army history. In his autobiography, the late Gen. H. Norman Schwarzkopf called Cavazos one of the finest division commanders he had ever served under.

“Many of my generation came to know him as the leading senior mentor for the Army’s then-Battle Command Training Program, where divisions and corps were rigorously trained and tested. Gen. Cavazos was truly a soldier’s soldier and he made everyone he encountered better. A legendary leader, a true patriot, all across our Army will miss him.”

Cavazos received both the Silver Star and Distinguished Service Cross in the Korean War, making him one of the five members of Puerto Rico’s 65th Infantry Regiment to receive the Distinguished Service Cross and one of 125 to receive Silver Stars during their service in Korea, according to the Army’s Center for Military History. The famed regiment was known as The Borinqueneers.

Cavazos’ citation says he showed extraordinary heroism in action near Sagimak, Korea, when he led his company through heavy barrages in three assaults on enemy positions. He was credited with braving hostile fire to locate and evacuate them one at a time, not stopping to have his own wounds treated until his men were all safely behind enemy lines.

He also was awarded a Distinguished Service Cross in Vietnam, where he was commander of the 1st Battalion, 18th Infantry. His citation says he exposed himself to hostile fire and exploding grenades while moving among his troops to direct a counterattack after his unit faced heavy fire while on a search and destroy operation. At one point, he led an assault on enemy positions that “was carried out with such force and aggressiveness that the Viet Cong were overrun and fled their trenches.”

Cavazos’ final military assignment was command of the U.S. Army Forces Command. “His early support for the National Training Center and his involvement in the development of the Battle Command Training Program enormously influenced the war fighting capabilities of the U.S. Army. General Cavazos' career exemplifies unparalleled devotion to duty,” according to an Army biography.

Cavazos retired in 1984 after 33 years of Army service, continuing to mentor young general officers. Among his many honors, he was inducted in 1993 into Fort Leavenworth’s Command and General Staff College Hall of Fame.

Retired Army Lt. Gen. Daniel P. Bolger, a senior fellow at AUSA's Institute of Land Warfare, said Cavazos “was a superb soldier in peace and war. He had a deep love for all in uniform, sterling bravery on the battlefield, and an unmatched understanding of how to fight and win.”