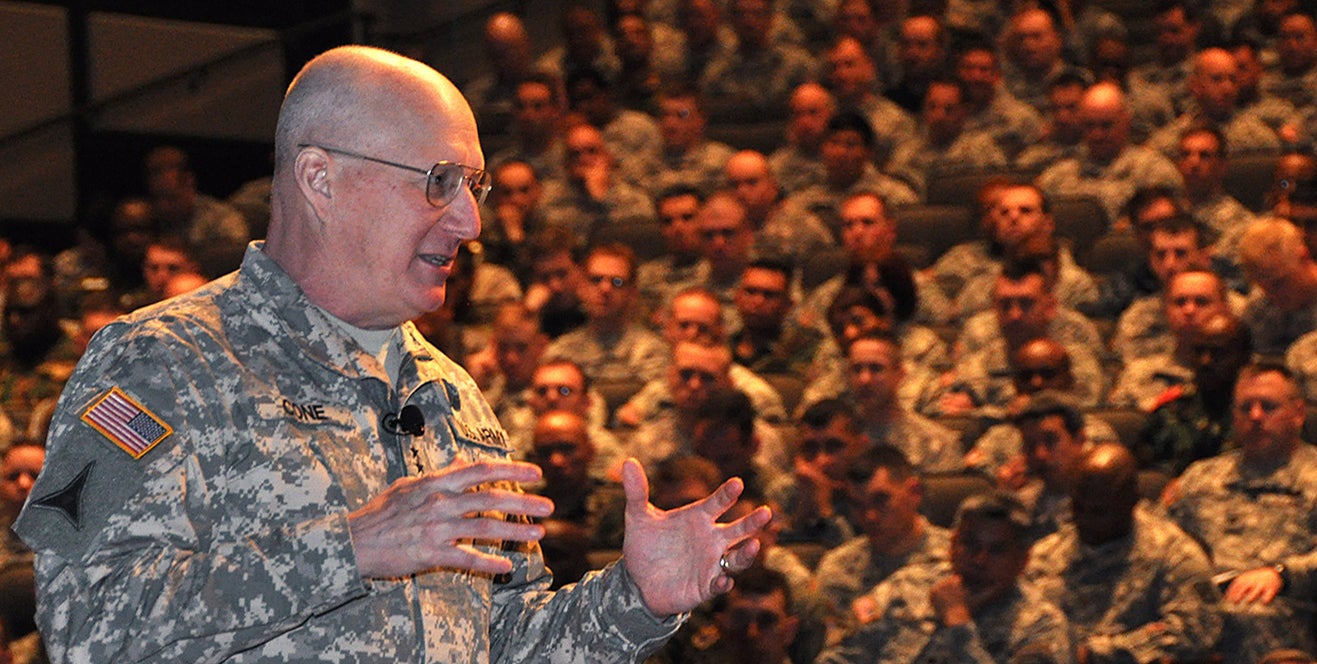 During his 35 years of service, the Manchester, N.H., native earned a reputation as a thoughtful leader who made major steps in shaping the future of the Army. This included overseeing the restructuring of Army leader development programs, accelerating digital learning programs and pushing the Force 2025 initiative that increased expeditionary maneuvering.

“He was a great friend, a brave warrior and a uniquely gifted Army leader. His loss leaves a big hole in our ranks and in our lives,” said retired Army Gen. Carter F. Ham, president and CEO of the Association of the U.S. Army.

Retired Sergeant Major of the Army Kenneth O. Preston, AUSA’s NCO and Soldier Programs director, said Cone “was a selfless and caring leader who always placed the mission and the welfare of his soldiers first; always focusing on what right looks like and teaching the standard. General Cone was a soldier’s soldier and a dynamic leader who inspired junior leaders and soldiers to be their best; we will miss him very much.”

At Cone’s 2014 retirement ceremony, then-Army Chief of Staff Gen. Raymond T. Odierno called him a “leader who lived our Army values, who always led from the front, and who dedicated himself to the profession of arms” and “one of the brightest innovators and leaders in our Army’s history.”

“His true legacy and reward will be thousands of soldiers and civilians whose lives he has touched over the span of his career,” Odierno said.

A 1979 graduate of the U.S. Military Academy, Cone also had academic degrees from the University of Texas at Austin and the Naval War College, and his ideas about leadership began forming early in his career.

Speaking at a 2012 Army Cadet Command George C. Marshall Awards and Leadership Seminar in Lexington, Va., Cone said his first assignment was to a platoon in which most of the NCOs and many of the soldiers had combat experience, a similar situation for many young officers. “I still had the high ground,” he said. “I was focused on standards and discipline. I was focused on doing things the right way. “

Cone recalled seeing soldiers asleep on duty. When he raised this issue with his platoon sergeant, the sergeant asked if Cone had been in Vietnam. “I said, ‘No I haven’t, but if this is what you guys did it really doesn’t work for me. You probably need to wake some guys up,'” said Cone, who was TRADOC commanding general when he addressed the cadets.

The lesson, he said, is “trust your instincts. You know what right looks like. The other thing I would tell you is you better be right. These sergeants, these soldiers look to you as a standard bearer and a standard setter.”

Cone assumed command at TRADOC after serving in combat in Operation Desert Storm, Operation Enduring Freedom, Operation Iraqi Freedom and Operation New Dawn, experiences that shaped his doctrine. "When American soldiers go into harm's way, they deserve the best training and the best equipment, and that will be job one,” he said at a 2012 forum sponsored by AUSA, expressing his deep respect for the profession and for soldiers.

Cone was commanding general of III Corps and Fort Hood, Texas, in 2009 when a U.S. Army psychiatrist killed 13 and wounded more than 30 people in the worst case of mass murder on a U.S. military installation. He’d only been in command for two months. At a 2015 awards ceremony, where Purple Hearts and Defense of Freedom medals were awarded to shooting victims, Cone said he was proud of how the installation and local community rallied after the tragedy. "What struck me most was the tremendous sense of purpose and resilience of the soldiers, civilians and first responders at the scene,” Cone said.

“At the moment of greatest need, these professionals were at their very best, using their combat training to respond to the crisis, to treat and evacuate the wounded, and care for each other,” Cone said. “That is what the Army is all about.”

Preston, who was Sergeant Major of the Army at the time of the shooting, said Cone showed himself to be a “caring and compassionate leader who masterfully took care of the victims and their families, pulled the communities together to focus their support where it was most needed and quickly returned the installation to a determined focus for the future.”