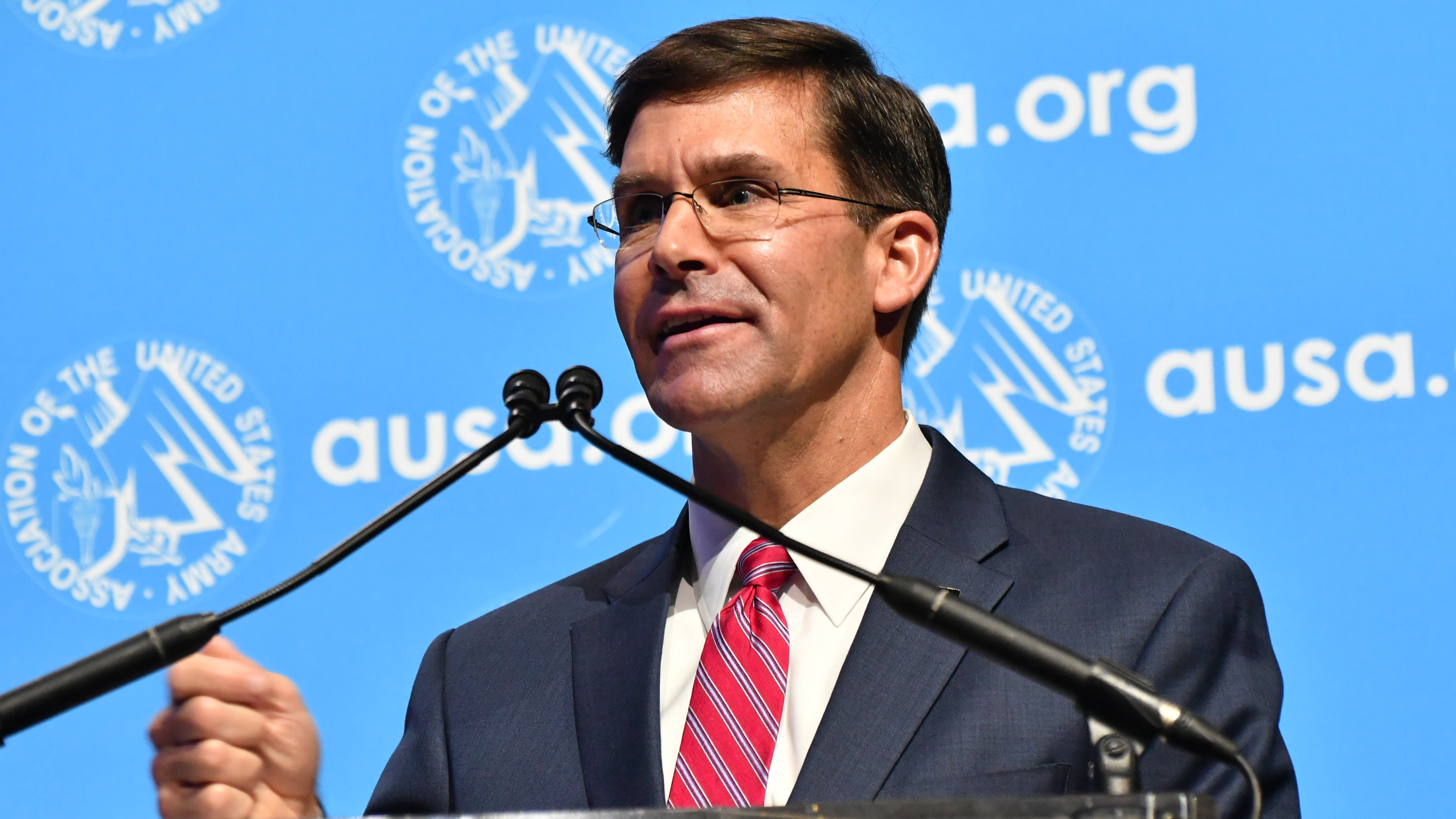 After years of tight budgets and advances by adversaries that have eroded the U.S. competitive advantage, the Army is “moving out” to reform itself and to modernize to be ready to fight and win any future war, Army Secretary Mark T. Esper said Oct. 8.

“These efforts amount to nothing short of an Army renaissance,” Esper told the opening ceremony of the Association of the U.S. Army’s Annual Meeting and Exposition in Washington D.C. “The time for change is now. We have the vision, strategy and leadership in place to ensure the Army remains prepared to deploy, fight and win our nation’s wars today and in the future.”

“We must act now to ensure that we are ready today and even more lethal tomorrow,” Esper said, echoing the theme of the 2018 meeting.

Answering questions from reporters after his speech, Esper elaborated on his theme of an “Army renaissance.”  “It’s an exciting time to be in the Army, a renaissance led by the chief of staff, Gen. Mark Milley and his focus on readiness in the past few years. Readiness and modernization are our guideposts  Change is under way and continuing reforms are vital to sustaining momentum."

Arguing that the changes must be comprehensive, Esper announced efforts to change doctrine, training, personnel policies, business practices and recruiting, that after the Army fell 6,500 recruits short of its recruiting goals in fiscal 2018. Answering questions after the talk, Esper said,  “TRADOC [U.S. Army Training and Doctrine Command] has been tasked with coming back with a holistic strategy of how to overhaul recruiting.”

Esper said he looks forward to ”expanding the number of recruiters” and promised “a lot more engagement with senior leaders.” “We can and will do a lot better” on recruiting, he said. Milley, speaking with reporters, added that the Army would “not sacrifice quality for quantity. We could have met the numbers if we were just after the numbers."

On doctrine, Esper said the rapid changes in technology and advances by potential adversaries make old doctrines obsolete, and they are being replaced by a new version of Multi-Domain Operations, which will be released soon. On training, he noted the addition of two months to infantry training. He described this as the “longest and most challenging infantry basic training in the world.” He said similar additions to training will be made for armor and engineers and, likely, other branches.

“We're also developing a new generation of weapons and equipment to guarantee overmatch for years to come,” Esper said, noting the “six modernization priorities” Army leadership had chosen “to put next-generation equipment into the hands of our soldiers. We expect to have prototypes for the next-generation combat vehicle; squad automatic weapon; mobile, short-range air defense system; and a strategic long-range cannon in the next few years.”

Milley, joining Esper to answer questions, talked about the Army’s investment in new infantry weapons as an investment of how the six priorities will increase readiness and lethality. “We are committed to a new rifle and squad automatic weapon. Right now, it looks like we will go to a 6.8 [mm] caliber round.” Milley considers the new weapon, “Entirely technically possible. This weapon has an accurate range far in excess of any military rifle today. Its muzzle velocity far exceeds the speed of any bullet today and will penetrate any body armor that will be developed in the next 25 years that we are aware of.” Milley said, “We are looking at buying 100,000 weapons, a number we may expand later, but will prioritize soldiers engaged in close-quarters combat.”

Guiding doctrine, modernization and other key initiatives will be in the hands of the new U.S. Army Futures Command, under its first commander, Gen. John M. Murray, he said.

Esper said providing the soldiers the future Army needs will require substantial changes in the personnel system to provide new career paths, among other modifications.

The secretary thanked Congress for the two years of substantial funding increases that will help in the urgently needed modernization, but urged the lawmakers to “please bring sufficiency, predictability and timeliness to our budgets so we can fully realize our vision. We need another budget agreement next year that puts national security above the budget control act,” he said, referring to the 2011 legislation that put limits on federal discretionary spending, of which defense is more than half.

And he promised Congress the Army would ensure every dollar it receives will be spent carefully to ensure the Army is ready today and more lethal tomorrow. That will require it to make major changes in the way it does business and “make hard choices” in programs and systems that must be cut and what new systems will be bought.

Finding funding for these priorities will require cutting back other spending, Esper said after his talk, that while  “the proposed budget needs to go through the OSD [Office of the Secretary Defense] process,” he and Milley have been  “going through programs and activities. We looked at each one and asked, is this more important than the NGCV [Next Generation Combat Vehicles]? Than long-range precision fires?” Esper warned that “reductions, cancellations and consolidations will result,” but that “where you put your money says a lot about your priorities.” And every soldier must ask if “there is a simpler, better or less expensive way to do this? If the answer is yes … ignore the skeptics and make the change,” he said.

Milley, striking a valedictory note, said that at his “fourth and last AUSA [Annual Meeting] as chief of staff of the Army,” he was ”proud of what the Army has done.” He said when he became chief of staff, “we were in a situation in respect to readiness that was on a downward slope.” Since then, he said, “we stopped the bleeding and are on an upwards swing.” But, he cautioned, the Army has “turned the corner but is not out of the woods yet” and that it will be “2023 when we should achieve our objective on readiness, on the glide path we are on now”.

Milley closed his comments with his perception that “we have been able to refocus our efforts and organize the institutional Army to enable more effective reorganization in the future.” He identified the means he was counting on to make the Army better in the future: “CFTs [cross-functional teams], Army Futures Command, strict priorities and putting budget money against those priorities.” He said these will help “reset the organization as we go into the future.” Milley said “readiness and modernization” were his priorities. “I am really pleased with what the Army has done.”