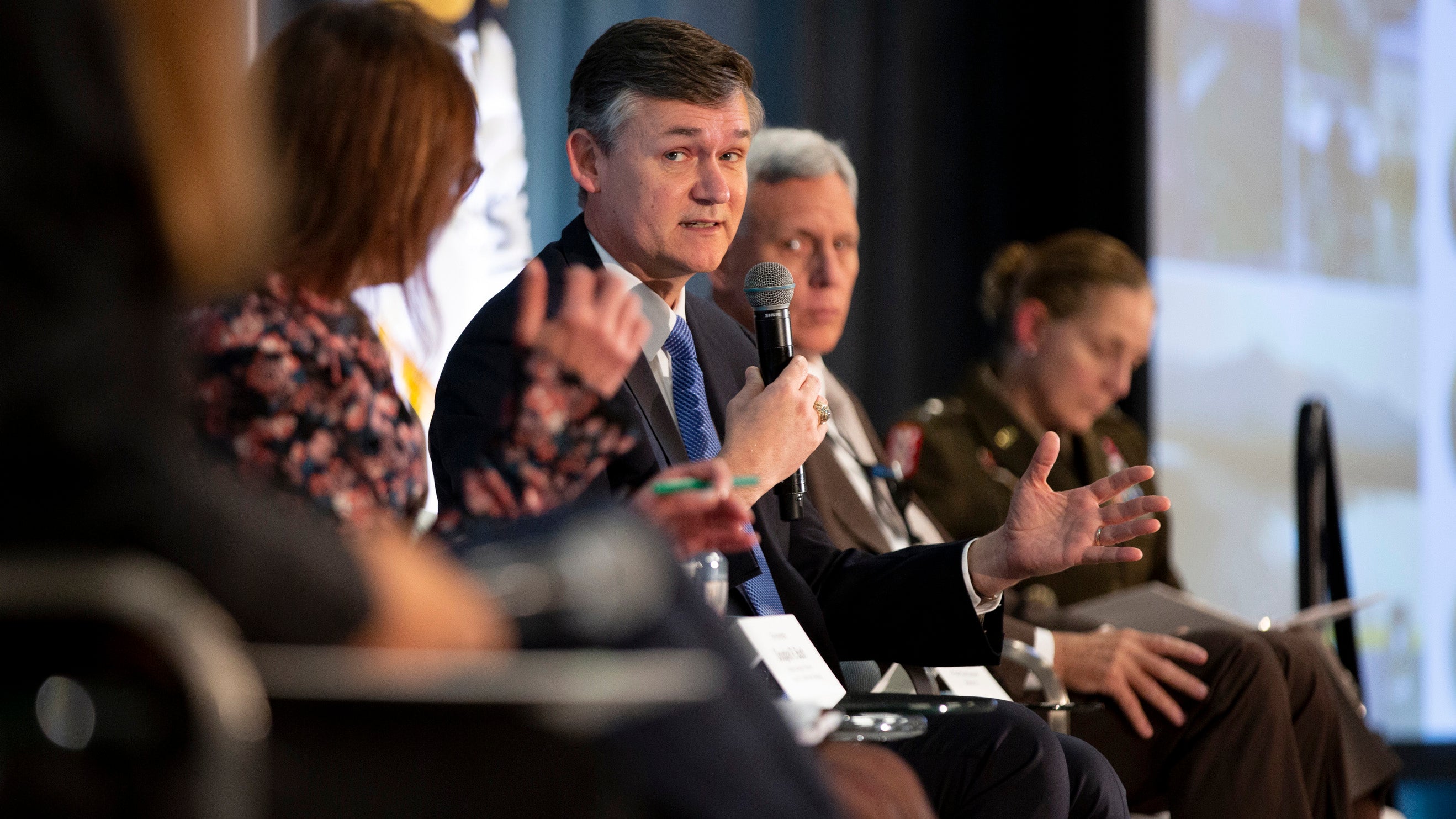 Photo by: Jen Milbrett for AUSA

But the Army’s top acquisition official says this move will also make soldiers more effective against the enemy.

Speaking Oct. 12 at the Association of the U.S. Army’s Annual Meeting and Exposition, Assistant Army Secretary for Acquisition, Logistics and Technology Doug Bush said future electric vehicles will create the opportunity to integrate directed energy weapons and other cutting-edge tools. That’s due not only to the hybrid electric engine, he said, but also the underlying energy power system that will enable that system.

“We’ll have the ability for the Army to [have] vehicles with enough electric power not just to be silent watch and use less fuel, but also to have things like directed energy weapons on them, lasers, high-powered microwaves and electronic warfare kits, all across the battlefield, Bush said.

“What you may have seen here on the [exhibit] floor and heard people talk about is the need to protect vehicles from a wide range of threats. People are seeing this in Ukraine. The only way to do that affordably is with directed energy systems, and you have to have electricity or power management on the vehicle that will enable those things to work.”

Also made possible through electric power are vehicle active protection systems that can shoot down attacking drones and missiles, Bush said, comparing the capability to having an “unlimited magazine,” versus a limited number of interceptors.

The advantage of silence should not be underestimated, said J.D. Johnson, a retired Army lieutenant general and vice president of business development for GM Defense.

“That advantage in the field, in the operational sense, can be huge,” Johnson said. “Silent ability, silent watch, to power sensors, to power weapons systems and power communications.”

Bush added that the Army is investing substantially in anti-idle kits that will reduce fuel waste in existing JP-8 powered vehicles and working to equip heavy armored vehicles with more efficient transmissions—updates that can reduce vehicles’ dependence on a logistics tail downrange.

At stateside installations, the Army is working to become more resilient against weather caused by climate change, using natural resources to create stormwater infrastructure as a barrier against flooding and working toward a 2040 goal to generate enough carbon-free energy to meet mission-critical requirements without depending on the local energy grid, said Rachel Jacobson, assistant secretary of the Army for installations, energy and environment.

Jacobson added that the Army is now building a barracks at Joint Base Lewis-McChord, Washington, using all-sustainable materials—an effort to make the service more resilient and less resource-dependent.

“Everything we are doing on the climate front will make us better warfighters while reducing our carbon footprint,” she said.