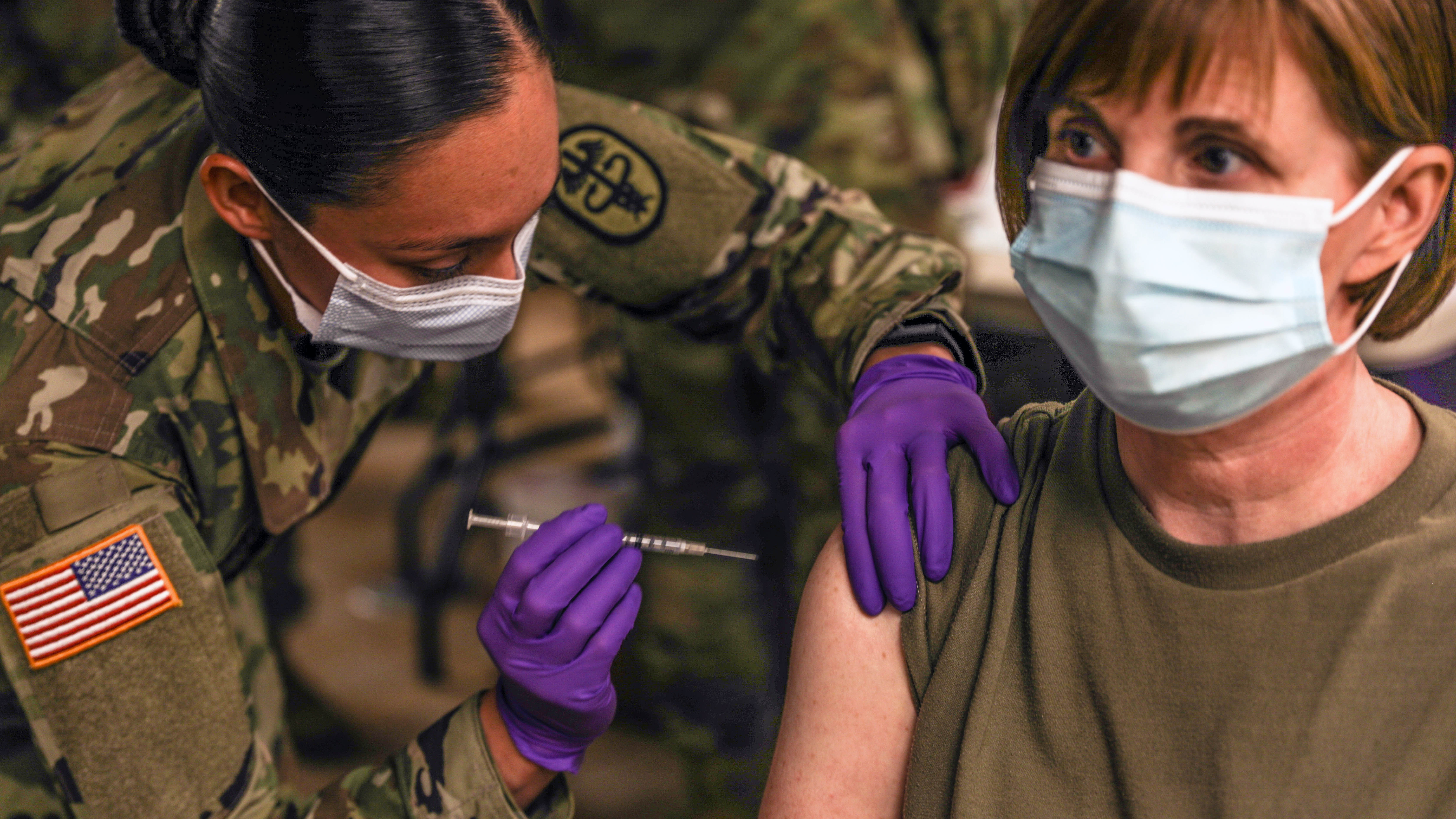 As the pandemic’s year mark approaches, the COVID-19 vaccine rollout showcases the “light at the end of the tunnel” and chance for a “new normal,” Army senior leaders said.

“Vaccines are among the most important accomplishments in modern medicine,” Lt. Gen. R. Scott Dingle, Army surgeon general, said Feb. 22 during a virtual town hall with soldiers and family members. “They have saved more lives around the world than any other medical innovation, including antibiotics and surgery itself,” he said.

The town hall featured Dingle and a panel of other senior Army leaders, and it addressed questions about the COVID-19 vaccine, including its safety and efficacy, distribution plans, and eligibility. The virtual presentation was part of a larger push by the Army and DoD to encourage service members, their families and veterans to get the vaccine.

Command Sgt. Maj. Diamond Hough, senior enlisted soldier for Army Medical Command, said navigating the pandemic is “a matter or readiness” as missions continue at home and abroad. “We are asking for your assistance and your trust,” Hough said, adding that vaccines are “an important part” of making sure troops are fit and ready.

While age can be a risk factor, Dingle said the virus has also caused severe illness in young and middle-aged adults. Its effects, he said, can “linger for weeks or months,” even in healthy adults. “If you have not received your vaccine, be sure to get it as soon as it is available,” Dingle said.

The continued push for vaccinations from Army leaders comes as soldiers remain active in COVID-19 response efforts across the country, including vaccine distribution. In February, the Pentagon approved more than 4,700 active-duty troops to deploy in support of the Federal Emergency Management Agency’s vaccination efforts.

According to Hough, DoD has requested vaccines for 11.1 million personnel, including service members in the reserve component. Reserve soldiers, he said, will receive the vaccine based on prioritization guidelines outlined by DoD and the Centers for Disease Control and Prevention.

“If enough of us roll up our sleeves, these vaccines can reduce the death and severe illness to help us eventually reclaim normalcy in our communities,” said Lt. Gen. Leslie Smith, the Army inspector general.

As DoD conducts a phased vaccine rollout, Dingle said a specific timeline for availability remains the “million-dollar question,” but distribution is “moving as quickly as possible.”

DoD will monitor the vaccine’s administration through “existing medical record reporting systems,” he said, and monitor and track reports of side effects.

According to Dr. Steven Cersovsky, deputy director of the Army Public Health Center, side effects usually subside in a day or two, and severe side effects are “extremely uncommon.” Addressing safety concerns, Cersovsky said the available vaccines have gone through “rigorous studies to ensure they are as safe as possible.”

“I, along with other Army senior leaders, remain committed to protecting our service members, our civilian employees, and our families,” Smith said. “We need you to take it in order to be ready, not only for our units, but our families, our communities, so we can get back to the new normal.”

Right now, the COVID-19 vaccine is not mandatory for military personnel while it’s under an emergency use authorization, he said, but that could change in the future.

“Do your part to protect yourselves, your family and friends, and to remain combat ready,” Dingle said.