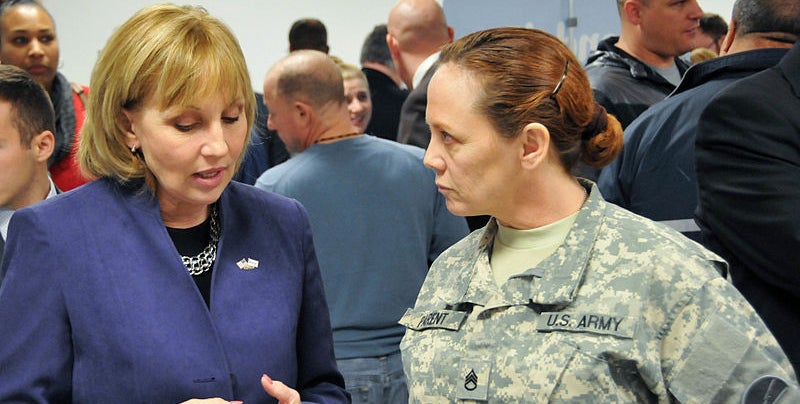 Veterans are now one of the three most important demographic groups targeted by private-sector companies seeking to fill jobs, according to a new survey by the U.S. Chamber of Commerce Foundation.

In the survey of 400 human resources professionals and hiring managers, 48 percent ranked veterans as a “very important” recruiting priority, eclipsed only by women, at 51 percent, and people with advanced degrees, at 52 percent.

The Army has been doing its part in recent years to push transitioning soldiers up that priority list with tools like the Soldier for Life Transition Assistance Program at www.sfl-tap.army.mil, a website jammed with news on local job fairs and seminars around the country and information on employment resources and benefits.

The U.S. Chamber of Commerce Foundation survey comes as the employment picture for veterans remains slightly better than the national average. The national unemployment rate for October was 4.9 percent, with about 7.8 million jobless Americans, the Labor Department’s Bureau of Labor Statistics reported Nov. 4.

The new survey found that hiring managers and HR professionals “have an overwhelmingly positive view” of veterans, using terms such as “honor, service, hard-working, commitment and hero” to describe them.

However, the survey indicates that something of a “civilian-military divide” still exists in the private sector, with veterans being viewed as less likely to have the same level of skills necessary to succeed in the workplace and, to a lesser extent, the necessary education levels, compared to their civilian counterparts.

Moreover, HR professionals and hiring managers generally have little familiarity with the military, the survey found. On a scale of one to 10, with one being “not at all familiar” and 10 being “extremely familiar,” 54 percent scored at five or lower.

The survey also included 1,000 veterans who have transitioned out of uniform in the past five years and spoke about the challenges they faced. Their experiences show “a clear relationship” between a successful transition and when they started their job search. Those who started to plan more than six months before separation “fare better than those who wait.”

The full report can be found here: www.uschamberfoundation.org/reports/veterans-workplace