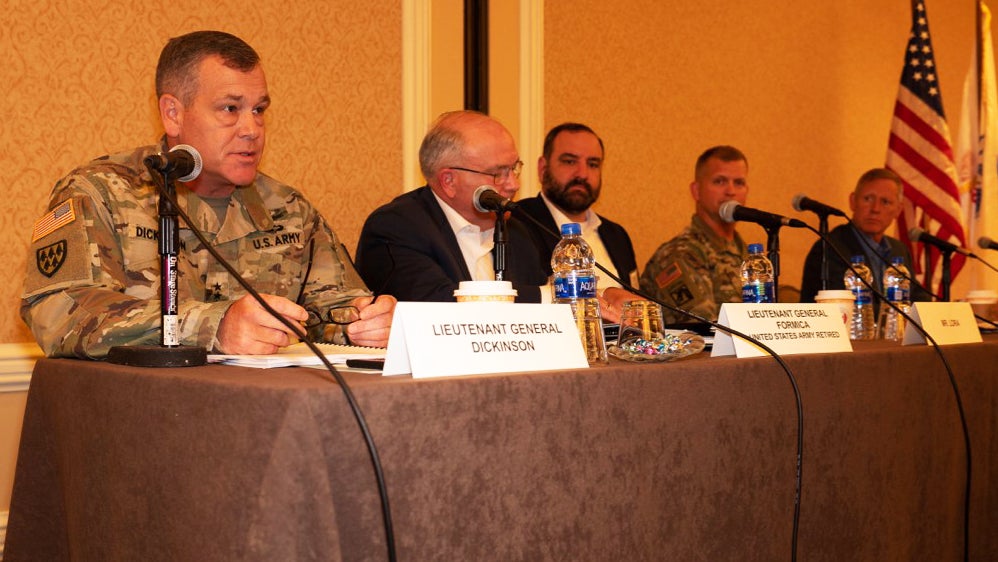 The recent Space and the Network Symposium hosted by the Association of the U.S. Army’s Greater Los Angeles Chapter in Huntington Beach, Calif., provided attendees with an expanded perspective into those increasingly dynamic domains.

Institutional/research and development components are in Huntsville, Ala., Dickinson said. They offer representative examples of how those activities are expanding support to the soldier.

The first area involves directed energy, where Dickinson said a 5-kilowatt laser on top of a Stryker combat vehicle has been involved in multiple experiments and demonstrations over the past couple of years.

“I will tell you that’s not the objective where we want to be in the future,” he said. “But quite frankly, it was a capability we wanted to spin off as quickly as we could to get into the hands of soldiers. And that’s where it is. We just finished an experiment over in Europe [that was] very successful [and where] we have soldiers that are actually operating that laser, which is phenomenal.”

Dickinson said while putting the laser into the hands of soldiers has allowed the start of the process known as DOTMLPF, which addresses critical issues ranging from doctrine to facilities, his command is working on a 50-kW laser in Huntsville.

“We just frankly got it out on the test range as we speak,” he said, adding that he personally fired the system, hitting a quarter-inch steel target “at a certain distance.”

Another representative activity is the command’s work with so-called small satellites.

“We are working right now with a small [low Earth orbit]-based satellite that is charged with providing imagery,” he said. “You may think to yourself that we have a bunch of satellites that already do that. The difference here is that particular satellite is able to produce an image and directly feed into a warrior's hand, whether it’s a brigade combat team leader, or a division commander, or anyone like that in a very rapid manner.”

Cautioning “it's not the exquisite images that you would normally be accustomed to,” he added, “it’s an image that gives what I would call ‘good enough’ for what a tactical commander needs.”

One of the small satellites was sent to the International Space Station atop a SpaceX resupply mission in October and placed into orbit, he said.

“We continue to work with that satellite and we’re going to do some demonstrations over the next few months on its military utility,” he said.