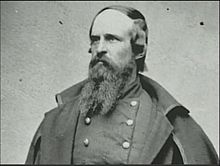 The Granite State Chapter of the Association of the U.S. Army has been renamed for a Civil War colonel who was famous for wearing a red bandanna on his head rather than a traditional officer’s cap.The Col. Edward Cross Chapter is named for a 5th New Hampshire Volunteer Infantry officer who died on July 3, 1863, in the Battle of Gettysburg. Cross, a newspaperman and occasional Army scout, was commissioned at the start of the Civil War, and gained a reputation as a colorful and daring leader. Wounded at the Battle of Seven Pines in Virginia and again at the Battle of Antietam in Maryland, Cross was said to favor a red bandanna because it was easier for his men to spot it on the battlefield.His journal, filled with lists of his soldiers, newspaper clippings and his description of some battles, is part of a Civil War collection at the University of New Hampshire Library. After one battle, he wrote that most of his officers were shot. “I lay on the ground for nearly three hours—part of the time between two fires—momentarily expecting to die, when I was discovered by Lt. Dan K. Cross of my regiment,” he wrote. “While lying there on the ground I saw many acts of cowardice and bravery.”Cross led a brigade of the 1st Division, II Corps, during the Battle of Gettysburg. On July 2, 1863, the 1st Division was sent to the left flank after Confederates attacked the salient formed by III Corps. Cross's brigade was formed on the left of the division's battle line as it entered the Wheatfield. During the fighting, Cross was mortally wounded while at the left of his line near the Rose Woods. He died the next day at a field hospital. His body was shipped home to Lancaster, N.H., for burial in the town's cemetery.A report filed by his aide, Maj. Charles A. Hale, after Cross’s death, said the colonel “evidently had a strong premonition of his death. It did not seem to affect him much. In fact, it affected me more than it did himself, for I was then only a smooth-faced boy of 19 while he was a long-bearded man of 31.” Hale said Cross announced as moved along the mountain that this would be his “last battle,” and asked the aide to attend to his books, papers and a private box to be turned over to his brother. Hale was not with Cross when the colonel was mortally wounded, but reports that Cross’s last words were, “I think the boys will miss me.”