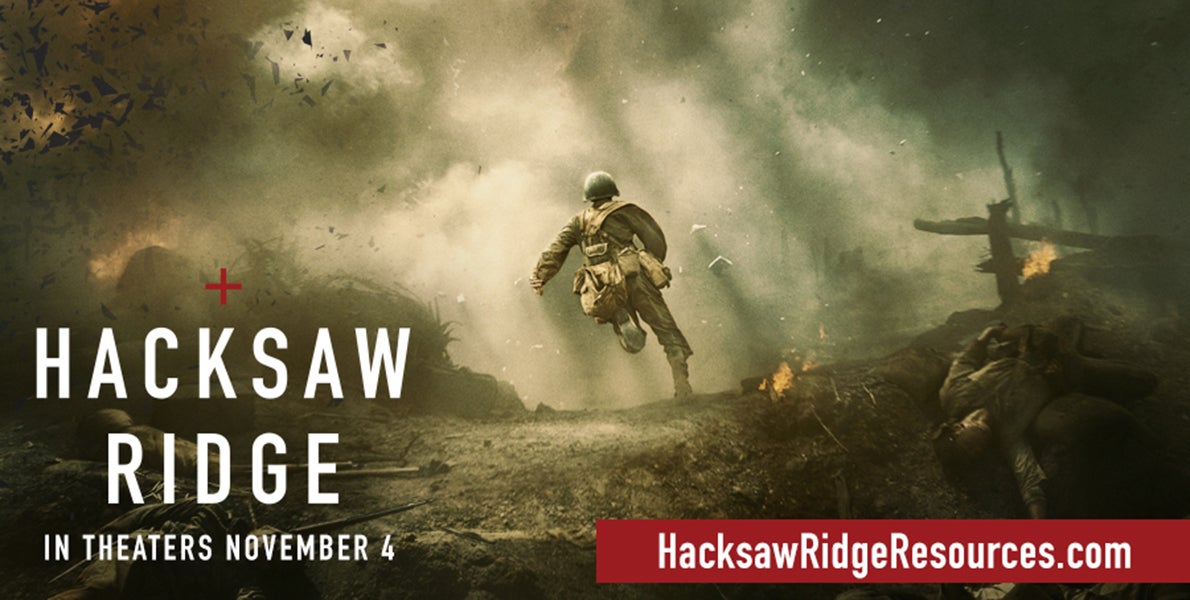 A pre-release screening of a dramatic movie about a World War II medic who received the Medal of Honor for his courageous actions in Okinawa was a popular addition to the Association of the U.S. Army's 2016 Annual Meeting and Exposition.

About 275 people attended the showing of Hacksaw Ridge, a film about the first conscientious objector to receive the nation's highest award for valor. The screening was hosted by AUSA and We Are the Mighty, and was provided by U.S. film distributor Lionsgate.

Directed by Mel Gibson, the movie tells the true story of Doss, a Lynchburg, Va., native who voluntarily enlisted in the Army but would not carry a weapon, even when threatened with court-martial.

The special screening opened with a short greeting from Gibson to AUSA members. Then came the film. The first hour is relatively slow-paced and placid, showing Doss’ rural boyhood in the Blue Ridge Mountains of Virginia, the son of a hard-drinking World War I veteran (portrayed by Hugo Weaving) who is haunted by the trauma of combat and the loss of some very close friends at Belleau Wood.

That first hour also shows the young adult Doss, played by Andrew Garfield, enlisting and heading to basic training under a typically hard-bitten drill sergeant (Vince Vaughn), who doesn’t have much use for Doss’ application for conscientious objector status and his refusal to touch a weapon—character traits that are not fully explained until later in the film.

That first hour is the calm before the storm. Once it starts raining, it pours, as Gibson portrays the hellish combat carnage of Okinawa in May 1945 in incredibly visceral detail.

Amid the blood and guts, Doss goes from being his unit’s oddball pariah to an object of awestruck admiration among his fellow soldiers as well as his commanders for refusing to abandon the wounded, no matter how heavy the enemy fire was and the number of shredded, mangled corpses he had to wade through to find survivors.

Doss is credited with saving about 75 fellow soldiers, carrying them one by one to the edge of a cliff and lowering them by an improvised litter in an evacuation that took hours. On subsequent days, he exposed himself to enemy fire to save others.

“An amazing story of a guy who stuck to his principles and didn’t let peer pressure, or any kind of pressure, deter him from doing what he believed in,” said Staff Sgt. Chris Cummings, a combat engineer with the Army Reserve’s 478th Engineer Battalion at Fort Thomas, Ky.

The R-rated movie is scheduled for wide U.S. release on Nov. 4. It had its world premiere Sept. 4 at the Venice Film Festival.