With a tight focus on senior military leaders and contemporary military authors, Thought Leaders seeks to educate the public on critical issues affecting land forces and strategy. Please join us on Thursday, 19 November 2020 at 1000 to hear a presentation by James Holland author of Sicily ’43: The First Assault on Fortress Europe. 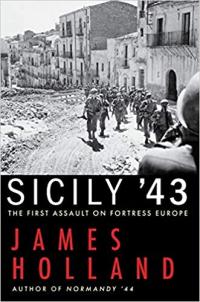 On July 10, 1943, the largest amphibious invasion ever mounted took place, larger even than the Normandy invasion eleven months later: 160,000 American, British, and Canadian troops came ashore or were parachuted onto Sicily, signaling the start of the campaign to defeat Nazi Germany on European soil. Operation HUSKY, as it was known, was enormously complex, involving dramatic battles on land, in the air, and at sea. Yet, despite its paramount importance to ultimate Allied victory, and its drama, very little has been written about the 38-day Battle for Sicily.

Based on his own battlefield studies in Sicily and on much new research, James Holland’s Sicily ’43 offers a vital new perspective on a major turning point in World War II and a chronicle of a multi-pronged campaign in a uniquely diverse and contained geographical location