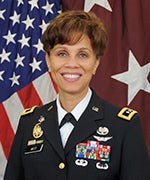 LTG West is a graduate of the United States Military Academy with a Bachelor of Science Degree in Engineering. She earned a Doctorate of Medicine Degree from George Washington University School of Medicine in Washington, DC.

She completed her internship and residency in Family Medicine at Martin Army Hospital, Fort Benning, GA. During this assignment, she deployed to Operation Desert Shield with the 197th Infantry BDE, 24th ID, and was attached to the 2/69th Armor BN during Desert Storm. She then served at Blanchfield Army Hospital, Fort Campbell, KY as a staff family physician and then Officer in Charge of the Aviation Medicine Clinic. She also participated in a medical mission with the 5th Special Forces Group (Airborne).

LTG West completed a second residency in dermatology at Fitzsimons Army Medical Center and University of Colorado Medical Center in Denver, CO. She then served as Chief, Dermatology Service at Heidelberg Army Hospital, Germany. LTG West then served as Division Surgeon of the 1st AD, Bad Kreuznach, Germany; deploying to the former Yugoslavian  Republic of Macedonia and Kosovo as Deputy Task Force Surgeon.

LTG West served as Deputy Chief of Staff, G1/4/6, Office of the Surgeon General, Falls Church, VA. Her most recent assignment was Joint Staff Surgeon at the Pentagon. As Joint Staff Surgeon she served as chief medical advisor to the Chairman of the Joint Chiefs of Staff and coordinated all Health Services issues related to include operational medicine, force health protection, and readiness within the US military.