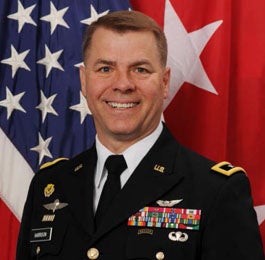 Major General Theodore “Ted” Harrison III became the Director of Operations for the Assistant Chief of Staff for Installation Management on October 9, 2015.

As the Director of Operations, General Harrison is responsible for overseeing the development and coordination of program requirements, strategy, and policies pertaining to facilities, military construction, energy, real property asset management and BRAC properties that support Army objectives and improves the quality of life for Soldiers, Civilians, and Families.

General Harrison was commissioned as a second lieutenant in Air Defense Artillery after graduating as a distinguished military graduate from Virginia Tech in 1980. He has served at various levels of command and staff positions throughout his career. Most recently, he served as the commanding general of the U.S. Army Contracting Command from October 2, 2013 to August 19, 2015.

He is a graduate of the Senior Service College Fellowship Program at the University of Texas, Austin. He holds a masters degree in Business Administration from Frostburg State University, MD., and a Bachelor of Science in Marketing Management from Virginia Tech. He is a graduate of the Air Defense Artillery Basic Course, Aviation Officer Advance Course (with honors), Defense Program Managers Course, and Command and General Staff College. General Harrison is Defense Acquisition Workforce Improvement Act Level III certified in both contracting and program management.