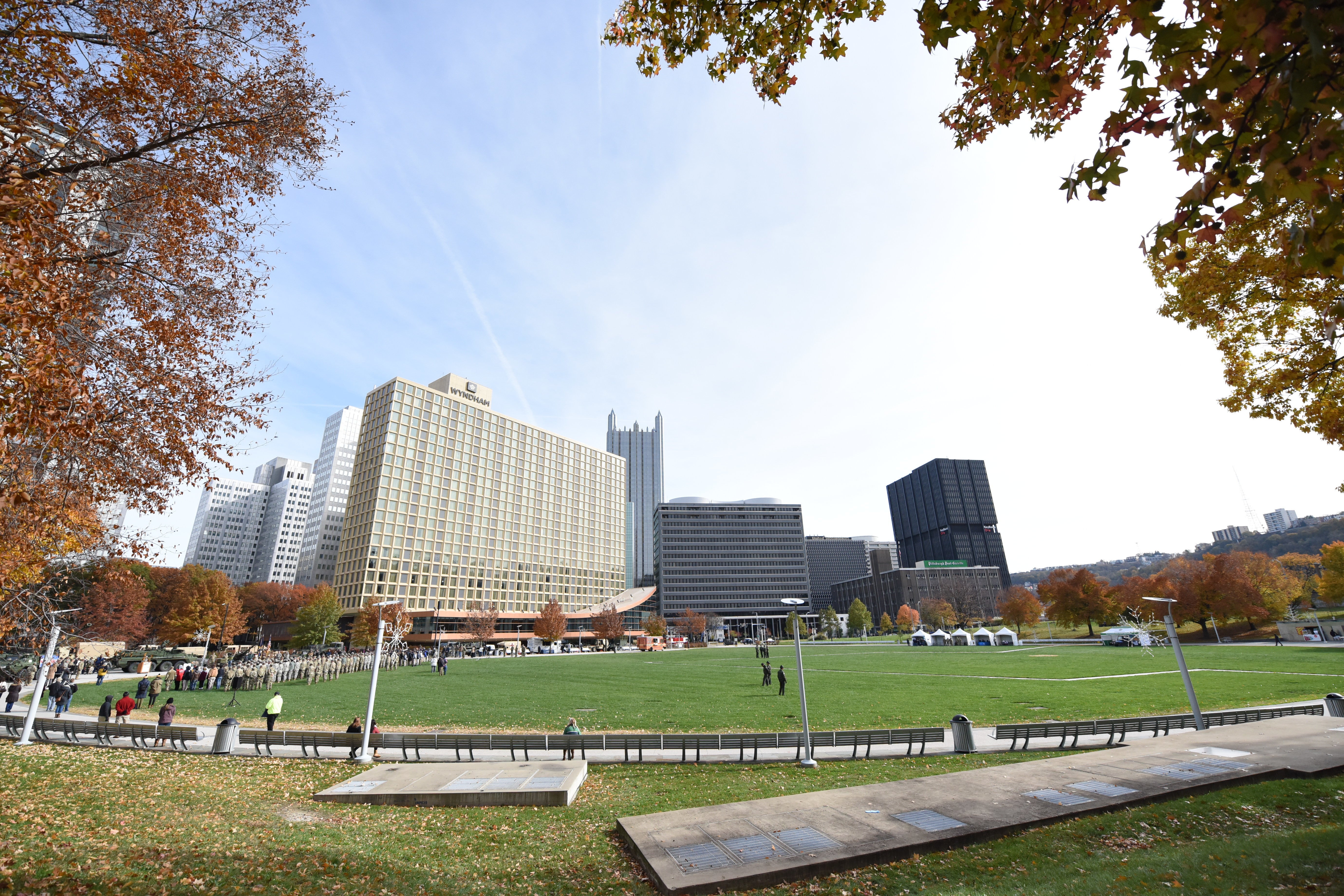 Please see below links and story from PANG and NGB about Pittsburgh Veterans Day Parade and SCStT  etc….  Also below is a link to pictures from the day to include the Pittsburgh Armed Forces Ball.   If you or your organization have additional post event news, articles or videos please feel free to forward and we will get them out.  Thank you to SMSgt Shawn Monk and Mr. Michael Redford for their support.  Also please friend us on face book.  Fort Pitt Chapter Association of the United States Army (AUSA)

The day had numerous activities and events assisted by and or organized by AUSA Pittsburgh along with PA Guard, USAR, DCNR, Heinz History Center and the City of Pittsburgh.  Each event and activity supported local ROTC’s, Guard and Reserve Components, Families, Community and Government.  The day started with the annual Pittsburgh Veterans Day Parade which was led by vehicles and troops from in around Pittsburgh.  Grand Marshal was CSM Chris Kepner Senior Enlisted Advisor to the Chief of the National Guard Bureau.  Some of the activities after the parade included historical narratives about the Army as well as an outdoor exhibit displaying all of our local military equipment, both past and present.  The final ceremony at Point State Park took time to honor the service of our local men and women past, present and future.  This year, was a unique and nearly unprecedented time in Pittsburgh history where so many local units/commands and their servicemen and women where called up to serve our country. The 2nd Brigade 28th Infantry Division, 1st Battalion 110th Infantry Regiment, 171st Air Refueling Wing and the 316th Expeditionary Sustainment Command, all of which are local Pittsburgh commands, were called to service and deployed in the last year were presented with plaques to commend them for their service and a job well done.  AUSA helped to coordinate with the city of Pittsburgh on the presentation of the plaques and a proclamation dedicating 11-11-17 as Steel City Salutes the Troops day.  The plaques themselves were manufactured from a special armor alloy that is made in the USA.  More than that it was final rolled, finished, cut, machined and laser etched in Pittsburgh by ATI and HERL.  A representative from the city of Pittsburgh ,Chief of Pittsburgh Fire and Rescue Chief Darryl Jones-USMC veteran, along with Civilian Aide to the Secretary of the Army Dr. Rory Cooper presented the four units the plaques and read the proclamation on behalf of the Mayor.   After the unit recognition several corporations  publicly showed their support for the local commands and their warriors by signing statements of support for ESGR.  Some of the signers where Allegheny Technologies, BNY Mellon, Fed Ex Ground,  Human Engineering and Research Laboratories and Pittsburgh Human Resources Association which represent tens of thousands of jobs in the Western PA region and around the world.  The culmination of the ceremonies at the park was a mass swearing in conducted by our own COL (ret.) Gordon Lam for troops from both the PA Army and Air Guard as well as USAR. Standing and supporting their troops where Brigadier General Timothy Hilty (PA National Guard Assistant Adjutant General), Brigadier General  Robert Harter (Commanding General 316th ESC) and COL Gregg Perez (PA Air National Guard-Commander 171st Air Refueling Wing).

The day’s activities ended with the premier celebration of Pittsburgh’s military community the third annual Pittsburgh Armed Forces Ball.  Hosted by the US Navy at the Navy Operations Service Center Pittsburgh and sponsored by BNY Mellon and ATI.

As iron sharpens iron, so one person sharpens another (Proverbs 27:17) .  We are the city of champions, we not only win on the field of play but also the field of battle.  We do that because of our deep roots in American Military Culture and history.  We do that because of our great support from the entire community, we do it because the citizens of the Pittsburgh Warrior Community strengthen, support, encourage, care for and sharpen our Warriors.  Thank you for everything you do, be safe and may you and yours be blessed.