When the Blackhorse—the famed 11th Armored Cavalry Regiment—were first sent to Vietnam in 1966, many in the Army thought that the insurgency was an infantryman’s war. Blackhorse leaders soon found a way to deal with the jungle, the monsoons, and enemy ambushes to prove the value of armored forces in the conflict. Over the next five and a half years, approximately 25,000 troopers served in the war as an essential part of the combat team.

The Blackhorse in Vietnam, a new title in the AUSA Book Program, tells the story of the 11th Armored Cavalry Regiment in Vietnam and Cambodia during the years 1966 to 1972. Author Don Snedeker is a second-generation Blackhorse trooper who arrived in Vietnam in 1969, served as a staff officer and a troop commander in the post-war years, and worked as a speechwriter for two Chairmen of the Joint Chiefs of Staff. 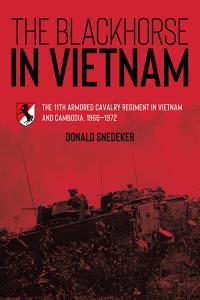 After retiring from active service, Snedeker has worked for more than twenty years as the historian for the 11th Armored Cavalry Veterans of Vietnam and Cambodia. He sat down with the AUSA Book Program to discuss The Blackhorse in Vietnam:

AUSA: What inspired you to write this book?

Snedeker: The 11th Armored Cavalry Regiment was a one-of-a-kind unit in Vietnam, and yet there is not a comprehensive history of the Regiment's service in the war published to date. Blackhorse veterans and their families deserve to have their story told.

AUSA: Why did you decide to focus on the Vietnam years?

Snedeker: Blackhorse Troopers wrote a remarkable story into the military history books during Vietnam. Theirs is a story that should be told, as many lessons learned from that era are still applicable today - such as the need for armored protection, heavy firepower, and three-dimensional mobility even during an unconventional war. Somalia was an example where that lesson was not applied, with disastrous consequences.

AUSA: How did the regiment’s mission change over the course of the war?

Snedeker: Upon its arrival in country in September 1966, common wisdom said that armored vehicles could not operate off the roads in Vietnam. By mid-1967, Blackhorse Troopers had proven this to be a myth. The initial missions of guarding convoys and opening lines of communication expanded to virtually the entire playbook of mission options.

AUSA: What was the most surprising thing you learned about the Blackhorse

Snedeker: The deep sense of brotherhood that is alive and well today amongst the Blackhorse veterans of Vietnam and Cambodia. Attending one of their reunions is to experience the true meaning of service, self-sacrifice, and valor.

AUSA: What role do you see for armored cavalry in today’s Army?

Snedeker: The armored cavalry regiment of the 1960s and ’70s was a textbook example of a combined arms team. The Blackhorse had the perfect balance of mobility, armored protection, and firepower to accomplish virtually any mission. Today's come-as-you-are operations need just such units.

To order a copy of The Blackhorse in Vietnam, please visit www.ausa.org/books.