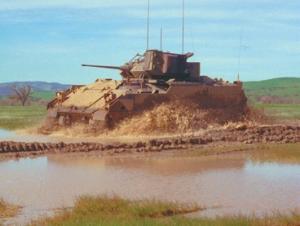 The M7 Bradley Fire Support Team (BFIST) Vehicle can control precision indirect fires to within 50 meters at a range of 8,000 meters from the vehicle.
United Defense LP
The Army has long had a need to deliver precision indirect fires. Yet recent political debates have spotlighted that need to the point that “precision fires” are suddenly becoming part of the public lexicon—debated on the OpEd pages of local newspapers, summarized in television sound bites and discussed over the radio airways.

As the name implies, the M7 BFIST is a modified M2A2 ODS (Operation Desert Storm) Bradley fighting vehicle that has been equipped with a specialized fire support mission equipment package (MEP). In addition to providing the critical fire support teams with the same mobility, survivability and battlefield signature as the A2 series Bradley, the M7 provides fire support teams with a 25 mm cannon for selfdefense. Most important, the M7 design provides, for the first time, the ability to “target on the move.”

The M2A2 ODS BFIST program dates back to the mid-1990s with the initial vehicle designs completing preproduction qualification testing and limited user testing during the second and third quarters of fiscal year (FY) 1997. The Phase I effort culminated on the last day of FY 1997 when the vehicle was approved for low rate initial production (LRIP). The LRIP contract was awarded early in FY 1998 and led to the production and delivery of the initial vehicles.

According to Carl Sullinger, M7 BFIST program manager at United Defense LP, the M7 BFIST vehicles began entering Army inventories in 2000. “Essentially they were dribbling in nine at a time with each direct support artillery battalion receiving nine vehicles,” he explains. “That’s one to go with each maneuver company.”

Initial fielding went to the Army’s 3rd Infantry Division. Fielding of the vehicles began at Fort Stewart, Ga., and moved to Fort Benning, Ga. (3 ID’s 3rd Brigade is at Fort Benning) in January 2001. Fielding followed  to Fort Sill, Okla., in March 2001 and to the 3rd Armored Cavalry Regiment in June 2001.

All together, those units received a total of 49 M7 BFIST vehicles. “Then there was a fielding hiatus due to funding stream issues,” Sullinger continues. “That meant that we had to pull all of our fielding teams out of the field, essentially, in September 2001. And we’re just now reforming the teams to support the fielding again. We’re now in production of the last 55 M7 vehicles and we’re getting ready to start fielding those to the 1st Cavalry Division at Fort Hood, Texas. We’ll also field those vehicles to the 2nd Infantry Division in Korea,” he says.

In late May, the first two vehicles were at Fort Hood with the full buildup projected by the end of July. New equipment training will occur during August with fielding handover projected for September. The M7 BFIST, initially assigned to the 3rd Infantry Division at Fort Stewart, GA., has the unprecedented ability to "target on the move."

The M7 BFIST configuration begins life as an M2 series Bradley fighting vehicle. At Red River Army Depot, Texas, the vehicle undergoes a cleanup and an inspect/repair only as necessary (IROAN) process. The IROAN efforts include a number of enhancements based on depot knowledge and experience. Preliminary work is also conducted for installation of the M7 hull communications station. “Red River has worked in a great team effort with our manufacturing facility in York,” Sullinger says.

To highlight the team effort, he explains that following the depot activities, the turret and hull are sent to the United Defense facility in York, Pa. After inspection at York, the turret is reassembled; the hull communications station is installed, and all final inspection reporting, testing and observations are conducted. The company also performs what Sullinger describes as “a very thorough longrange targeting test on targets that are as much as five miles away.”

Sullinger is also quick to praise the early M7 field experiences and investigations of the 3rd Infantry Division Artillery (DivArty). The unit has already conducted four M7-equipped rotations at the National Training Center. (M7s also went to Kosovo with the 3rd ID.)

“They have really tried to take advantage of the new capabilities,” he says. “In fact, they are paving the way for the Army to develop new TTPs [Tactics, Techniques and Procedures] to fully exploit this potential. The 3rd DivArty has just provided incredible support and been amazingly innovative in exploring targeting on the move and precision fires.”

In addition to the M7 BFIST configuration, Army program planners were quick to identify the need for an “embedded” version of the BFIST that would operate within the Army’s digitized force structures. Early plans called for that variant to be designated M7A1. Recent funding and program decisions, however, have changed the designation to M3A3 BFIST.

Two prototypes of the digitized M3A3 BFIST design were built under a 1999 research, development, test and evaluation contract with subsequent fielding tests in 2001.

“It’s essentially an M3A3 with the M7 hull communications station and some software changes,” Sullinger says. “There is some hardware and some new electrical work although the majority of the effort involves software.

But the M3A3 BFIST turned out to be even more accurate at long ranges than the M7 BFIST. Quite honestly you would give credit for that to the [M3]A3 program because they did all of the preliminary work. What we did was to ‘tweak’ the software, introduce a new boresight procedure and move the inertial navigation unit from the hull to the turret.”

He notes that United Defense has already prepared a contract modification proposal for the M3A3 BFIST for the fielding of 56 digitized/embedded variants. Those systems will initially replace the M981s currently supporting the Army’s 4th Infantry Division, the Army’s “First Digitized Division.” In addition to the reliability, mobility and survivability benefits inherent in the new chassis, Sullinger summarizes the program’s impact by noting, “The Soldiers have the ability in the M7 and M3A3 BFIST to target on the move. They have never had anything like that before.”

“The second aspect involves precision fires,” he adds. “This is a very accurate system, traditionally giving the target in eight-digit coordinates right off. The 3rd DivArty has demonstrated on several occasions that the M7 has the ability to put precision indirect fires on the target with standard munitions. And by precision I mean within 50 meters at a range of 8,000 meters from the vehicle. Now that’s precision fires.”