Authors and editors for six new Association of the U.S. Army Book Program titles were available at the association’s 2019 Annual Meeting and Exposition to greet attendees, answer questions and auto-graph copies of their books.

They also presented their works in detail at the Authors’ Forum on Oct. 14. C-SPAN captured the proceedings, and American History TV will broad-cast the panels later this year.

The first panel profiled controversial and unconventional Army leaders. Jon Mikolashek kicked things off with Blood, Guts, and Grease: George S. Patton in World War I, which examines an often-overlooked period in the general’s life and shows how Patton was instrumental in developing the tank corps and its doctrine.

Michael Lynch then offered a “nuanced examination” (per fellow author Rick Atkinson) of a controversial WWII and Korean War general in Edward M. Almond and the U.S. Army: From the 92nd Infantry Division to the X Corps.

Andrew Marble completed the panel with Boy on the Bridge: The Story of John Shalikashvili’s American Success, a biography of the immigrant from war-torn Europe who became chairman of the Joint Chiefs of Staff.

The forum’s second panel examined challenges for the modern Army.

Don Vandergriff, a long-time champion for mission command, offered a history of the concept and showed what still needs to be done with Adopting Mission Command: Developing Leaders for a Superior Command Culture.

Hal Friedman, editor of War in the American Pacific and East Asia 1941–1972, examined military concerns in the region from World War II through the depths of the Cold War.

John Bonin focused on contemporary challenges as detailed in Landpower in the Long War: Projecting Force after 9/11, and editor Jason Warren represented the book in the AUSA Pavilion for the remainder of the show. 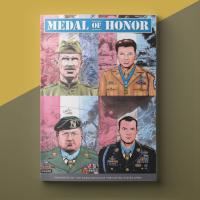 Honor and service were recognized at the pavilion with the debut of the Medal of Honor graphic novel compendium. This printed collection features the first four titles in the series, which previously were only available digitally.

Given the overwhelming response to the graphic novels, AUSA plans to produce four more titles for 2020 and print another compendium for next year’s annual meeting.

We welcome suggestions for the next set of soldiers to profile—send your thoughts to [email protected].