To help ensure warfighters are ready for battle, resilient to evolving tactics and able to quickly recover from setbacks, Kratos integrates the latest in Virtual Reality (VR), Augmented Reality (AR) and Mixed Reality (MR) technology with its state of the art simulation systems and instructional design capabilities to create immersive and semi-immersive training environments.

Mixed Reality is the result of blending the physical world with the digital world –the next evolution in human, computer, and environment interaction –and unlocks possibilities that were previously restricted to our imaginations. It is made possible by advancements in computer vision, graphical processing power, display technology, and input systems. The application of mixed reality includes environmental input, spatial sound, and location.

Advancements in sensors and processing are giving rise to a new area of computer input from environments. The interaction between computers and environments is effectively environmental understanding, or perception. Environmental input captures things like a person's position in the world (e.g., head tracking), surfaces and boundaries (e.g., spatial mapping and spatial understanding), ambient lighting, environmental sound, object recognition, and location.

The key differentiator of MR is that it enables digital content and real-world content to interact with each other in real-time, in ways beyond AR and VR. The effects of tactile, audio, and visual sensory cues on a participant's sense of presence in a virtual environment directly correlate to the success of training. Kratos’ innovative MR platform makes those sensory experiences real and intense, creating a fully immersive experience that truly mimics the combat environment. A potentially disruptive technology, Kratos’ MR platform is currently being evaluated by DoD components to appraise next generation technology and products for soldier lethality and air traffic control training.

Training at the Point of Need

The platform’s key advantage is that it enables MR-based training to be delivered to the point of need (PoN) – virtually anywhere. The light source panels can be configured to accommodate various sizes and shapes– from rotary aircraft cabins, to tracked vehicles or marksmanship firing ranges and to the Kratos Holodeck. 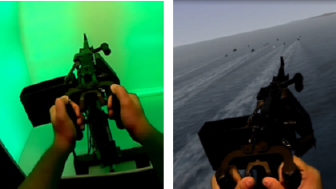 Kratos develops performance-driven learning solutions with a rigorous systematic design process that employs theories of cognition, motivation, adult learning theory and a criterion-based framework. Kratos can automate the development of the simulation based curriculum and Interactive Media Instruction (IMI) thus integrating the simulation and virtual elements for all phases of training.

The KATC aircrew simulators provide aircrew members with training equivalent to what they would have received on their own simulator or aircraft.  The Air Force Global Strike Command (AFGSC) has approved KATC’s Aerial Gunnery Trainer (AGT) Simulator to be used in crediting sorties toward some of their annual aerial gunnery training requirements: evidence that virtual reality is increasingly becoming a viable complement to live training.