AQYR is a manufacturer of Satellite Communications Terminals 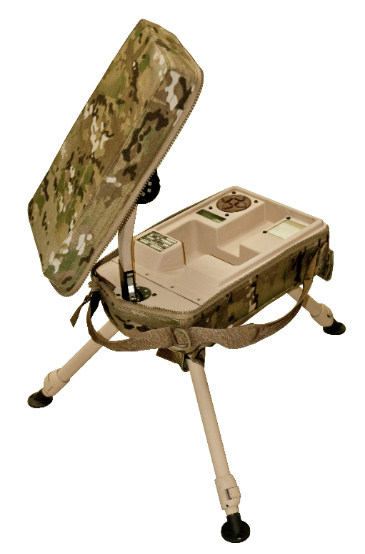 Designed for deployment, AQYR products are known for ease of setup, simplicity of use, transportability, ruggedness, and reliability. All AQYR terminals can be transported in a single case, with multi-case options. With no tools used for assembly and setup, the terminals can be set-up in a matter of minutes and fully operational in as little as 5 minutes. All products are manufactured and supported from our New Hampshire home.

The auto-acquisition VSAT terminals such as the TYPHOON and newly developed Taranis are capable of operation on commercial satellite systems. Used in operations for two-way communications networks, these are powerful yet cost effective solutions where the operator has limited experience in deploying satcom capabilities. 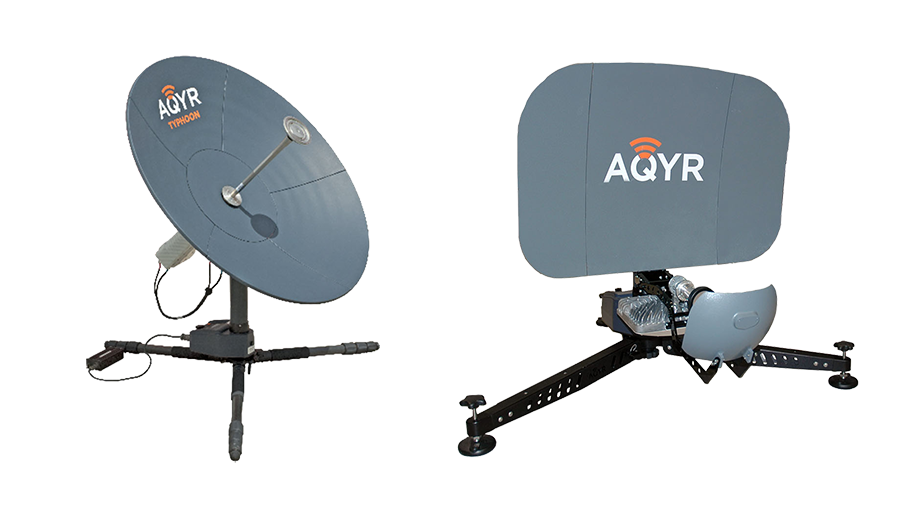 The Global Broadcast System (GBS) tactical terminals, the AN/PRS-11 and AN/PRS-12 provide the military user the capability of quickly accessing the high-speed downloads available through the GBS on the WGS satellite network. Small and easily transported and deployed, these terminals will provide superior capability in a small footprint and easy operation. With the optional 60cm and 80cm dish accessories, the terminals can provide high speed download from anywhere in the WGS footprint.

Though new technologies and services have the potential to provide more SATCOM bandwidth to the Warfighter, deployed users continue to struggle with congested networks. While the use of hybrid networks under the control of flexible and secure network management will mitigate this issue, innovative applications of the GBS can address it today without significant additional expense.

The GBS is a critical element of the DoD’s Intelligence, Surveillance, and Reconnaissance (ISR) capability and though it’s primary focus has been to transmit Full Motion Video from Unmanned Aircraft Systems (UAS) to tactically deployed forces it has considerable value for all types of data needed by the warfighter in a deployed or garrison environment.  The flexible, secure infrastructure that supports the core ISR mission can be repurposed to support a broader concept of operations.

GBS as a Force Multiplier

There are many misconceptions concerning GBS’ utility that have limited its use as a bandwidth augmentation capability. The GBS provides critical download capabilities for receiving information such as ISR data, weather data and mission data; it is not just for “viewing CNN or the Super Bowl”. One capability that is slowly gaining traction is to provide high speed data downloads in conjunction with a deployed unit’s organic two-way SATCOM systems. While typical two-way systems are constrained due to bandwidth limitations and download speeds, GBS systems can provide consistent, high-speed download of secure and non-secure data. It is helpful to think of GBS as a military version of a Direct-To-Home services such as DirecTV or Dish Network where one subscribes to a channel and sets the tuner to that channel for reception of the information being transmitted. In this case, however, the user is receiving classified (or unclassified) data essential to fulfill the mission or support the force.

With the congestion on military networks and the delay (and expense) of integrating commercial satellite resources it is vital to find a way to offload some of the mission data to an available, less expensive alternative. GBS’ typical broadcasts of full motion video, digital maps biometric data or satellite imagery represent only a portion of the system’s capability. It also allows high speed download of data transfers. This type of communication between a command and their deployed units, or between multiple deployed units, requires large amounts of bandwidth that may not be available using traditional means. With a single transmission on the GBS this data can be broadcast simultaneously to all units authorized to receive the transmission saving considerable time and bandwidth costs. Even large file transmission can be received much faster than using the standard two-way transmission. The potential ability to offload significant amounts of data from two-way systems to a system capable of a 45MBs stream is a true “force multiplier”. Transfers for data such as software updates, security patches, or other large files could occur in a timely, low cost fashion using an existing, supported infrastructure. Although a one-way system can never replace a bi-directional communications link, it can assist in reducing the strain on already congested networks and do so with a minimal electromagnetic signature. 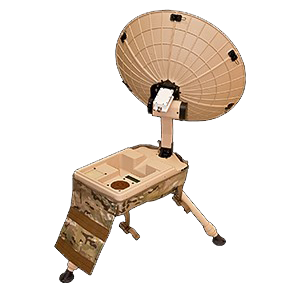