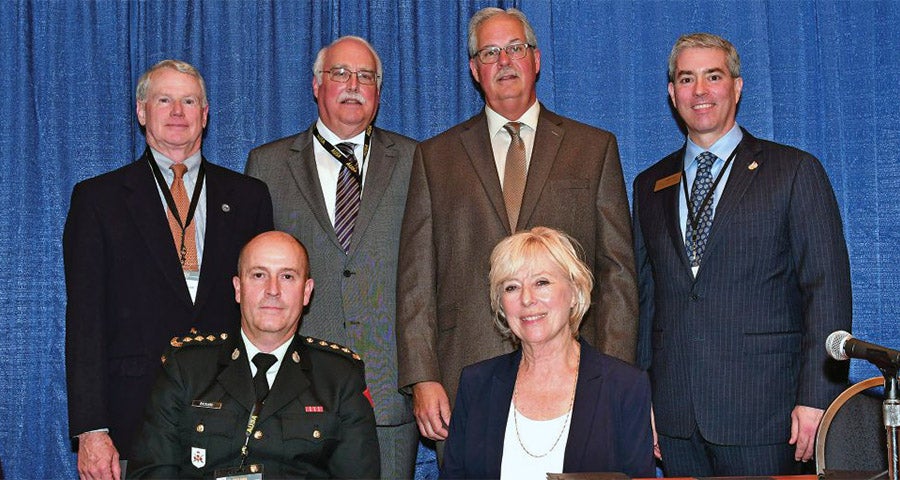 Authors, editors and translators gathered at the AUSA Annual Meeting and Exposition in October to promote their latest contributions to the AUSA Book Program. Seven scholars kicked off the meeting with an Authors’ Forum, where they presented their works on World War I, World War II and the Cold War. C-SPAN was on hand to capture the event, which will be broadcasted later this year as part of their American History TV programming.

In recognition of the 100th anniversary of the Armistice, the first panel of the forum focused on the Great War. Lawrence Kaplan started things off with Pershing’s Tankers, a collection of personal experiences from the AEF Tank Corps. Kaplan got the idea for the project when he found original documents in files of then-Col. George S. Patton. It turned out that they were the only copies – the accounts had not been recorded in the National Archives.
Janice Ancker discussed her translation work on The Forgotten Front: The Eastern Theater of World War I, 1914–1915, addressing the challenges and joys of bringing this little-known material to an American audience.

Thomas Conner then took the audience on an impressive visual tour of overseas memorials in his history of the American Battle Monuments Commission, War and Remembrance. Moving to the Second World War, Richard Harrison presented the concluding volume of his Soviet General Staff series The Battle of the Dnepr. Capt. John Nelson Rickard, CAF, returned to Patton and recounted his role as commander in the Battle of the Bulge in his book Advance and Destroy.

Staying in the European Theater, James Scott Wheeler noted that all armchair historians are familiar with the head of 21st Army Group (Field Marshall Bernard Montgomery) and the 12th Army Group (Lt. Gen. Omar Bradley), but very few know who commanded 6th Army Group on the right front. That led Wheeler to write the biography Jacob L. Devers: A General’s Life. (Thanks to that presentation, I now know the name is pronounced “deh-vers” rather “dee-vers”.)

Jack C. Mason brought the crowd into the Cold War era, talking about Gen. John R. Deane Jr. whose career ran from WWII through Berlin and Vietnam before he assumed command of United States Army Materiel Command. Mason first met him while serving as an escort officer for the 92-year-old general and forged a connection that resulted in editing Deane’s memoir, Lessons in Leadership.

The authors continued their work with book signings throughout the show, greeting soldiers and civilians from the 31,000 attendees who walked the floors past the AUSA Pavilion. Interest was high, and several authors sold out their copies before the end of the three days. One eager reader of the books was Army Chief of Staff Gen. Mark Milley, who walked away with copies of the lot.